A perfect disinfectant would offer full microbiological sterilisation, without harming humans and would also be non-corrosive.


A perfect disinfectant would also offer complete and full microbiological sterilisation, without harming humans and useful forms of life. It would also be inexpensive and non-corrosive. Most disinfectants, however, are by nature, potentially harmful (even toxic) to humans or animals. Most modern household disinfectants contain Bitrex, an exceptionally bitter substance added to discourage ingestion, as a safety measure. Those that are used indoors should never be mixed with other cleaning products, or else chemical reactions can occur.

The choice of disinfectant depends on the particular situation. Some disinfectants have a wide spectrum and kill many different types of microorganisms, while others kill a smaller range of disease-causing organisms but are preferred for other instances (they may be non-corrosive, non-toxic, or inexpensive).

There are arguments for creating or maintaining conditions that are not conducive to bacterial survival and multiplication, rather than attempting to kill them with chemicals. Bacteria can increase in number very quickly, which enables them to evolve rapidly. Should some bacteria survive a chemical attack, they give rise to new generations composed completely of bacteria that are resistant to the particular chemical used. Under a sustained chemical attack, the surviving bacteria in successive generations are increasingly resistant to the chemical used, and ultimately the chemical is rendered ineffective. For this reason, some question the wisdom of impregnating cloths, cutting boards, and worktops in the home with bactericidal chemicals. 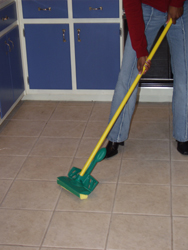 Some antiseptics are germicides, capable of destroying microbes (bacteriocidal), while others are bacteriostatic and prevent their growth.

Describe how antiseptics can be bacteriocidal or bacteriostatic


Antiseptics are antimicrobial substances that are applied to living tissue/skin to reduce the possibility of infection, sepsis, or putrefaction. Antiseptics are generally distinguished from antibiotics by the latter's ability to be transported through the lymphatic system to destroy bacteria within the body, and from disinfectants, which destroy microorganisms found on non-living objects.

Some antiseptics are true germicides, capable of destroying microbes (bacteriocidal), while others are bacteriostatic and only prevent or inhibit their growth.

Antibacterials are antiseptics that have the proven ability to act against bacteria. Microbicides that destroy virus particles are called viricides or antivirals.

Most commonly used are ethanol (60–90%), 1-propanol (60–70%), and 2-propanol/isopropanol (70–80%) or mixtures of these alcohols. They are commonly referred to as "surgical alcohol. " They are used to disinfect the skin before injections are given, often along with iodine (tincture of iodine) or some cationic surfactants (benzalkonium chloride 0.05–0.5%, chlorhexidine 0.2–4.0%, or octenidine dihydrochloride 0.1–2.0%). 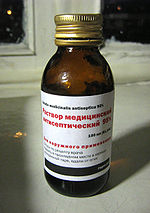 Boric acid: Used in suppositories to treat yeast infections of the vagina, in eyewashes, and as an antiviral to shorten the duration of cold sore attacks. Put into creams for burns. Also common in trace amounts in eye contact solution. A triarylmethane dye still widely used as 1% ethanol solution in Eastern Europe and ex-USSR countries for treatment of small wounds and abscesses. Efficient against gram-positive bacteria.

Chlorhexidine Gluconate: A biguanidine derivative, used in concentrations of 0.5–4.0% alone or in lower concentrations in combination with other compounds, such as alcohols. Used as a skin antiseptic and to treat inflammation of the gums (gingivitis). The microbicidal action is somewhat slow, but remanent. It is a cationic surfactant, similar to Quats.

Hydrogen peroxide: Used as a 6% (20 Vols) solution to clean and deodorize wounds and ulcers. More common 3% solutions of hydrogen peroxide have been used in household first aid for scrapes, etc. However, even this less potent form is no longer recommended for typical wound care because the strong oxidization causes scar formation and increases healing time. Gentle washing with mild soap and water or rinsing a scrape with sterile saline is a better practice.

Novel iodine antiseptics containing povidone-iodine (an iodophor, complex of povidone, a water-soluble polymer, with triiodide anions I3-, containing about 10% of active iodine) are far better tolerated, don't negatively affect wound healing, and leave a deposit of active iodine, thereby creating the so-called "remnant," or persistent, effect. The great advantage of iodine antiseptics is their wide scope of antimicrobial activity, killing all principal pathogens and, given enough time, even spores, which are considered to be the most difficult form of microorganisms to be inactivated by disinfectants and antiseptics.

Mercurochrome: Not recognized as safe and effective by the U.S. Food and Drug Administration (FDA) due to concerns about its mercury content. Other obsolete organomercury antiseptics include bis-(phenylmercuric) monohydrogenborate (Famosept).

Manuka Honey: Recognized by the U.S. Food and Drug Administration (FDA) as a medical device for use in wounds and burns. Active +15 is equal to a 15% solution of phenol.

Octenidine dihydrochloride: A cationic surfactant and bis-(dihydropyridinyl)-decane derivative, used in concentrations of 0.1–2.0%. It is similar in its action to the Quats, but is of somewhat broader spectrum of activity. Octenidine is currently increasingly used in continental Europe as a QAC's and chlorhexidine (with respect to its slow action and concerns about the carcinogenic impurity 4-chloroaniline) substitute in water- or alcohol-based skin, mucosa, and wound antiseptic. In aqueous formulations, it is often potentiated with addition of 2-phenoxyethanol.

Phenol is germicidal in strong solution, inhibitory in weaker ones. Used as a "scrub" for pre-operative hand cleansing. Used in the form of a powder as an antiseptic baby powder, where it is dusted onto the navel as it heals. Also used in mouthwashes and throat lozenges, where it has a painkilling effect as well as an antiseptic one. Example: TCP. Other phenolic antiseptics include historically important, but today rarely used (sometimes in dental surgery) thymol, today obsolete hexachlorophene, still used triclosan and sodium 3,5-dibromo-4-hydroxybenzenesulfonate (Dibromol).

Antimicrobial compound suitable for clinical use in critically colonized or infected acute and chronic wounds. The physicochemical action on the bacterial envelope prevents or impedes the development of resistant bacterial strains.

Although glycols are effective air disinfectants in controlled laboratory environments, it is more difficult to use them effectively in real-world environments because the disinfection of air is sensitive to continuous action. Continuous action in real-world environments with outside air exchanges at door, HVAC, and window interfaces, and in the presence of materials that adsorb and remove glycols from the air, poses engineering challenges that are not critical for surface disinfection. The engineering challenges associated with creating a sufficient concentration of the glycol vapors in the air have not to date been sufficiently addressed.

Alcohols, usually ethanol or isopropanol, are sometimes used as a disinfectant, but more often as an antiseptic, the distinction being that alcohol tends to be used on living tissue rather than nonliving surfaces. These alcohols are non-corrosive but can be a fire hazard. They also have limited residual activity due to evaporation, which results in brief contact times unless the surface is submerged. They also have a limited activity in the presence of organic material.

Alcohols are most effective when combined with purified water to facilitate diffusion through the cell membrane; 100% alcohol typically denatures only external membrane proteins. A mixture of 70% ethanol or isopropanol diluted in water is effective against a wide spectrum of bacteria, though higher concentrations are often needed to disinfect wet surfaces. Additionally, high-concentration mixtures (such as 80% ethanol + 5% isopropanol) are required to effectively inactivate lipid-enveloped viruses (such as HIV, hepatitis B, and hepatitis C). Alcohol is only partly effective against most non-enveloped viruses (such as hepatitis A), and is not at all effective against fungal and bacterial spores.

The efficacy of alcohol is enhanced when in solution with the wetting agent dodecanoic acid (coconut soap). The synergistic effect of 29.4% ethanol with dodecanoic acid is effective against a broad spectrum of bacteria, fungi, and viruses. Further testing is being performed against Clostridium difficile (C. Diff) spores using higher concentrations of ethanol and dodecanoic acid, which has been indicated to be effective with a contact time of ten minutes.

Aldehydes, such as formaldehyde and glutaraldehyde, have a wide microbiocidal activity and are sporocidal and fungicidal. They are partly inactivated by organic matter and have slight residual activity. Some bacteria have developed resistance to glutaraldehyde; it has also been found that glutaraldehyde can cause asthma and other health hazards, hence ortho-phthalaldehyde is replacing glutaraldehyde.

Oxidizing agents act by oxidizing the cell membrane of microorganisms, which results in a loss of structure and leads to cell lysis and death. A large number of disinfectants operate in this way. Chlorine and oxygen are strong oxidizers, so their compounds figure heavily here.

Phenolics are active ingredients in some household disinfectants. They are also found in some mouthwashes and in disinfectant soap and handwashes.

Quaternary ammonium compounds (quats), such as benzalkonium chloride, are a large group of related compounds. Some concentrated formulations have been shown to be effective low-level disinfectants. Typically, quats do not exhibit effectiveness against difficult to kill non-enveloped viruses such as norovirus, rotavirus, or polio virus.

Prior to the advent of antibiotics, live organisms were used directly in attempts to control microbial infections.


A wide variety of chemicals called antimicrobial agents are available for controlling the growth of microbes. For example: 1. Chemotherapeutic agents, including antibiotics, are administered into the infected body. 2. Disinfectants are chemical agents used on inanimate objects to lower the level of microbes present on the object. These are not capable of sterilizing, typically because they fail to kill endospores, some viruses, and organisms such as Mycobacterium tuberculosis. 3. Antiseptics are chemicals used on living tissue to decrease the number of microbes present in that tissue.

Disinfectants and antiseptics affect bacteria in many ways. Those that result in bacterial death are called bactericidal agents. Those causing temporary inhibition of growth are bacteriostatic agents. No single antimicrobial agent is most effective for use in all situations - different situations may call for different agents. A number of factors affect selection of the best agent for any given situation - Antimicrobial agents must be selected with specific organisms and environmental conditions in mind. Additional variables to consider in the selection of an antimicrobial agent include pH, solubility, toxicity, organic material present, and cost.

Once an agent has been selected, it is important to evaluate it's effectiveness. In evaluating the effectiveness of antimicrobial agents, the concentration, length of contact, and whether it is lethal (-cidal) or inhibiting (-static) at that concentration of exposure are the important criteria.

Prior to the advent of antibiotics, live organisms were used directly in attempts to control microbial infections. Examples of such biological control included bacteriotherapy, bacteriophage therapy, malaria therapy, probiotics, and the use of living maggots. In all cases the organisms themselves rather than a product of their metabolism were used as the potentially curative agent. The biological control of human infections was largely restricted to the treatment of surface infections of the skin and mucous membrane. Additionally, attempts were made to alter the microflora of the human intestinal tract to favor the growth of benign or beneficial bacteria or yeasts. Modern studies suggest that the use of biological control in the treatment of human infections should be re-evaluated in the light of the increasing world-wide occurrence of antibiotic-resistant bacteria, and the opportunities provided by recent developments in gene technology. 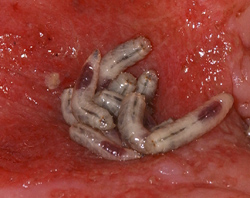