Direct counting methods are used to determine bacterial concentration without the need for advanced equipment. 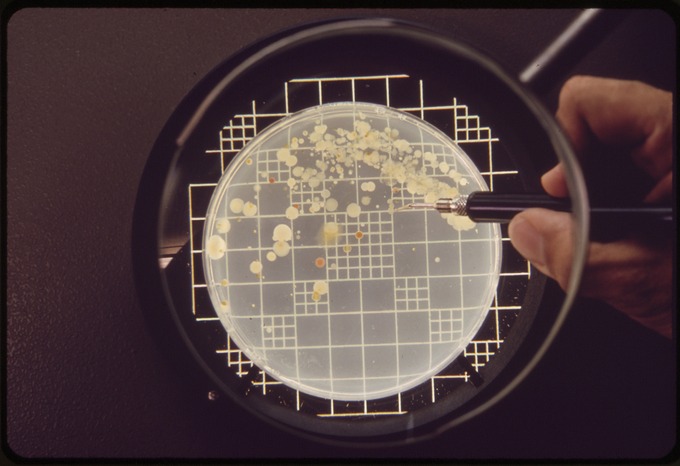 Counting Colonies: An example of counting colonies on a streak plate.

Direct counting methods include microscopic counts using a hemocytometer or a counting chamber. The hemocytometer works by creating a volumetric grid divided into differently sized cubes for accurately counting the number of particles in a cube and calculating the concentration of the entire sample. One can also quantify the number of cells in a culture by plating a known volume of the cell culture on a petri dish with a growth medium, which is also known as a streak plate. If the cells are distributed on the plate properly, it can generally be assumed that each cell will give rise to a single colony. The colonies can then be counted and, based on the known volume of the culture that was spread on the plate, the cell concentration can be calculated. Bacterial colony counts made from plating dilutions of bacteria are useful to estimate the strength of bacterial infections; for example, a urinary tract bacterial infection.

As with hemocytometers or counting chambers, cultures need to be heavily diluted prior to plating. Otherwise, instead of obtaining single colonies that can be counted, a so-called "lawn" of thousands of colonies will form, all lying atop each other. Additionally, plating is the slowest method because most microorganisms need at least 12 hours to form visible colonies. These methods of direct counting do not require sophisticated instrumentation, so they can easily be performed in most laboratories.

Plate counting is used to estimate the number of viable cells that are present in a sample. 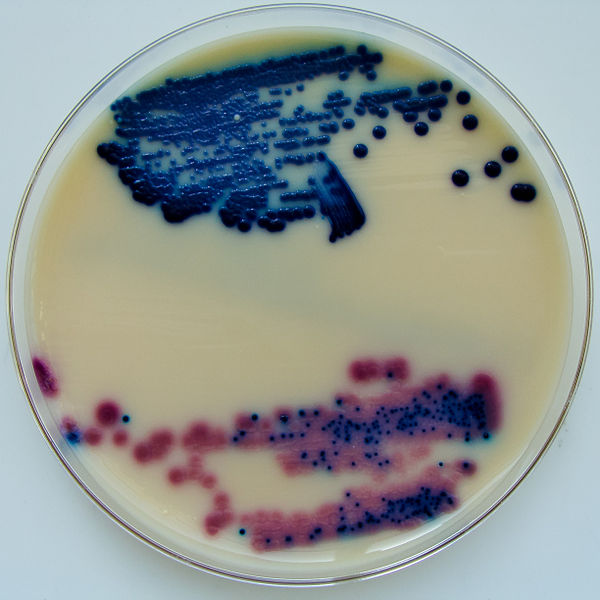 Selective media can be used to restrict the growth of non-target bacteria.: Urine cultured on Oxoid Brilliance UTI Agar plate. 1uL of urine spread onto the agar surface. The top sample is from patient with clinical urinary tract infection (UTI). The bottom sample is a mixed culture.

There are a variety of ways to enumerate the number of bacteria in a sample. A viable cell count allows one to identify the number of actively growing/dividing cells in a sample. The plate count method or spread plate relies on bacteria growing a colony on a nutrient medium. The colony becomes visible to the naked eye and the number of colonies on a plate can be counted. To be effective, the dilution of the original sample must be arranged so that on average between 30 and 300 colonies of the target bacterium are grown. Fewer than 30 colonies makes the interpretation statistically unsound and greater than 300 colonies often results in overlapping colonies and imprecision in the count. To ensure that an appropriate number of colonies will be generated several dilutions are normally cultured. The laboratory procedure involves making serial dilutions of the sample (1:10, 1:100, 1:1000 etc. ) in sterile water and cultivating these on nutrient agar in a dish that is sealed and incubated. Typical media include Plate count agar for a general count or MacConkey agar to count gram-negative bacteria such as E. coli. Typically one set of plates is incubated at 22°C and for 24 hours and a second set at 37°C for 24 hours. The composition of the nutrient usually includes reagents that resist the growth of non-target organisms and make the target organism easily identified, often by a color change in the medium. Some recent methods include a fluorescent agent so that counting of the colonies can be automated. At the end of the incubation period the colonies are counted by eye, a procedure that takes a few moments and does not require a microscope as the colonies are typically a few millimeters across.

The pour plate method is used when the analysis is looking for bacterial species that grow poorly in air. The initial analysis is done by mixing serial dilutions of the sample in liquid nutrient agar which is then poured into bottles. The bottles are then sealed and laid on their sides to produce a sloping agar surface. Colonies that develop in the body of the medium can be counted by eye after incubation. The total number of colonies is referred to as the Total Viable Count (TVC). The unit of measurement is cfu/ml (or colony forming units per milliliter) and relates to the original sample. Calculation of this is a multiple of the counted number of colonies multiplied by the dilution used. Examples of a viable cell count are spread plates from a serial dilution of a liquid culture and pour plates. With a spread plate one makes serial dilutions in liquid media and then spreads a known volume from the last tube in the dilution series. The colonies on the plate can then be counted and the concentration of bacteria in the original culture can be calculated. In the pour plate method a diluted bacterial sample is mixed with melted agar and then that mixture is poured into a petri dish. Again the colonies would be counted and the viable cell count calculated.

Changes in the number of bacteria can be calculated by a variety of methods that focus on microbial mass.

Measurement in Three Phases of Growth

Bacterial growth follows three phases: the lag phase, the log phase, and the stationary phase. The measurement of an exponential bacterial growth curve in a batch culture was traditionally a part of the training of all microbiologists; the basic means requires bacterial enumeration (cell counting) by direct and individual (microscopic, flow cytometry), direct and bulk (biomass), indirect and individual (colony counting), or indirect and bulk (most probable number, turbidity, nutrient uptake) methods. Models reconcile theory with the measurements.

There are several methods for measuring cell mass, including the gravimeter method which uses ordinary balances to weigh a sample (dry weight/ml) after the water has been removed. 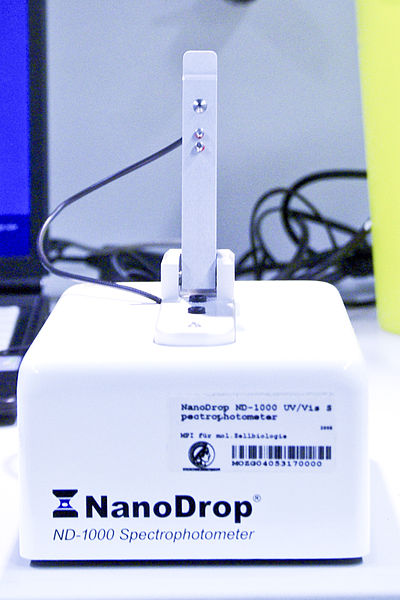 An indirect method for calculating cell mass is turbidimetry. Cell cultures are turbid: they absorb some of the light and let the rest of it pass through. The higher the cell concentration is, the higher the turbidity. Spectrophotometers are electrical appliances that can measure turbidity very accurately. The culture is placed in a translucent cuvette; the cuvette is placed in the machine and the turbidity measured immediately. Simple mathematical formulae help convert the detected turbidity to cell concentration. Using spectrophotometry for measuring the turbidity of cultures is known as turbidometry. Note the difference in spelling: turbidimetry and turbidometry are not the same word.

In spectrophotometry, cultures usually do not need to be diluted, although above a certain cell density the results lose reliability. Of all the electrical appliances used for counting cells, a spectrophotometer is the cheapest and its operation the fastest and most straightforward. This has made spectrophotometry the methods of choice for quick measurements of bacterial growth and related applications. There are spectrophotometers in which several cuvettes can be inserted at one time, reducing work time even more. Additionally, there are spectrophotometers that require extremely small volumes of culture, as little as 1 microliter. This, combined with the stochastic nature of liquid cultures, enables only an estimation of cell numbers.

An additional method for the measurement of microbial mass is the quantification of cells in a culture by plating the cells on a petri dish. If the cells are efficiently distributed on the plate, it can be generally assumed that each cell will give rise to a single colony. The colonies can then be counted, and based on the known volume of culture that was spread on the plate the cell concentration can be calculated.

As is with counting chambers, cultures usually need to be heavily diluted prior to plating; otherwise, instead of obtaining single colonies that can be counted, a so-called "lawn" will form, resulting in thousands of colonies lying over each other. Additionally, plating is the slowest method of all: most microorganisms need at least 12 hours to form visible colonies.

Culture media can be used to differentiate between different kinds of bacteria by detecting acid or gas production.

Show how microbial acid and gas production are detected

A microbiological culture, or microbial culture, is created using a method for multiplying microbial organisms by letting them reproduce in predetermined culture media under controlled laboratory conditions. Microbial cultures are used to determine an organism's type, its abundance in the sample being tested, or both. It is one of the primary diagnostic techniques of microbiology, where it is used as a tool to determine the cause of infectious diseases by letting the agent multiply in a predetermined medium. A throat culture, for example, is taken by scraping the lining of tissue in the back of the throat and blotting the sample into a growing medium; this will allow analysis to screen for harmful microorganisms, such as Streptococcus pyogenes, the causative agent of strep throat. The term "culture" can be used to refer to the process of culturing organisms, to the medium they're grown in, and is more generally used informally to refer to "selectively growing" a specific kind of microorganism in the lab.

Differential media, also known as indicator media, distinguish one microorganism type from another growing on the same media. These types of media use the biochemical characteristics of a microorganism grown in the presence of specific nutrients or indicators that have been added to the medium to visibly indicate the defining characteristics of a microorganism. These indicators or nutrients include but are not limited to neutral red, phenol red, eosin y, and methylene blue. Differential media are used for the detection of microorganisms and by molecular biologists to detect recombinant strains of bacteria.

The Durham tube method is used to detect production of gas by microorganisms. They are simply smaller test tubes inserted upside down in another test tube. This small tube is initially filled with the solution in which the microorganism is to be grown. If gas is produced after inoculation and incubation, a visible gas bubble will be trapped inside the small tube. The initial air gap produced when the tube is inserted upside down is lost during sterilization, usually performed at 121°C for 15 or so minutes

Escherichia coli (E. coli), a rod-shaped member of the coliform group, can be distinguished from most other coliforms by its ability to ferment lactose at 44°C in the fecal coliform test, and by its growth and color reaction on certain types of culture media. When cultured on an EMB (eosin methylene blue) plate, a positive result for E. coli is metallic green colonies on a dark purple media. Unlike the general coliform group, E. coli are almost exclusively of fecal origin and their presence is thus an effective confirmation of fecal contamination. Some strains of E. coli can cause serious illness in humans.

Sorbitol MacConkey agar is a variant of the traditional MacConkey commonly used in the detection of E. coli O157:H7. Traditionally, MacConkey agar has been used to distinguish those bacteria that ferment lactose from those that do not. 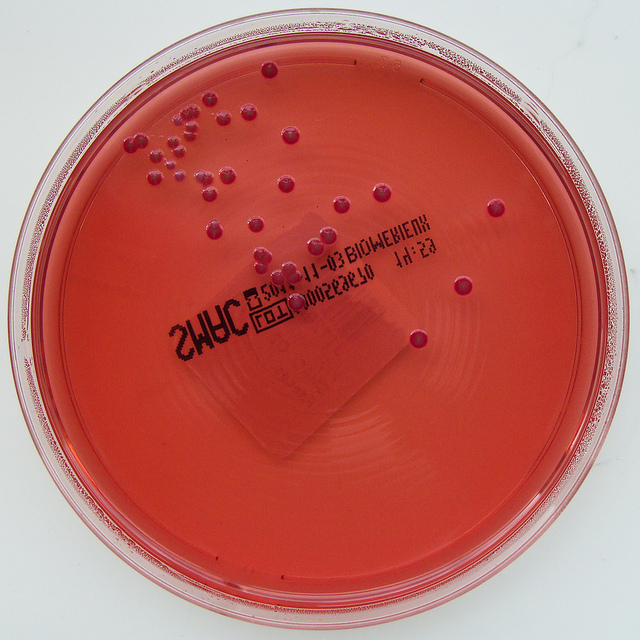 This is an important distinction. Gut bacteria, such as Escherichia coli, can typically ferment lactose; important gut pathogens including Salmonella enterica and most shigellas are unable to ferment lactose. Shigella sonnei can ferment lactose, but only after prolonged incubation; it is referred to as a late-lactose fermenter.

During fermentation of sugar, acid is formed and the pH of the medium drops, changing the color of the pH indicator. Different formulations use different indicators; neutral red is often used when culturing gut bacteria because lactose fermenters turn a deep red when this pH indicator is used. Those bacteria unable to ferment lactose, often referred to as nonlactose fermenters (NLFs) metabolize the peptone in the medium. This releases ammonia, which raises the pH of the medium. Although some authors refer to NLFs as being colorless, in reality they turn neutral red a buffish color.

CHEMICAL A 3123 •  University of Kuala Lumpur

MEDICAL SC MICR1011 •  University of the West Indies at Mona

EFFECTIVENESS OF GALLUS GALLUS DOMESTICUS EGGSHELLS AS AN ANTIBACTERIAL COMPONENT OF HAND SOAP.pdf