Phagocytosis is the engulfment of foreign material in a body by a specialized cell type.


Phagocytosis is the process by which a cell takes in particles such as bacteria, parasites, dead host cells, and cellular and foreign debris. It involves a chain of molecular processes. Phagocytosis occurs after the foreign body, a bacterial cell, for example, has bound to molecules called "receptors" that are on the surface of the phagocyte. The phagocyte then stretches itself around the bacterium and engulfs it. Phagocytosis of bacteria by human neutrophils takes on average nine minutes to occur. Once inside the phagocyte, the bacterium is trapped in a compartment called a phagosome. Within one minute the phagosome merges with either a lysosome or a granule, to form a phagolysosome. The bacterium is then subjected to an overwhelming array of killing mechanisms and is dead a few minutes later. Dendritic cells and macrophages, on the other hand, are not so fast, and phagocytosis can take many hours in these cells. Macrophages are slow and untidy eaters; they engulf huge quantities of material and frequently release some undigested material back into the tissues. This debris serves as a signal to recruit more phagocytes from the blood. Phagocytes have voracious appetites; scientists have even fed macrophages with iron filings and then used a small magnet to separate them from other cells.

All phagocytes, and especially macrophages, exist in degrees of readiness. Macrophages are usually relatively dormant in the tissues and proliferate slowly. In this semi-resting state, they clear away dead host cells and other non-infectious debris and rarely take part in antigen presentation. But, during an infection, they receive chemical signals—usually interferon gamma—which increases their production of MHC II molecules and which prepares them for presenting antigens. In this state, macrophages are good antigen presenters and killers. However, if they receive a signal directly from an invader, they become "hyperactivated", stop proliferating, and concentrate on killing. Their size and rate of phagocytosis increases—some become large enough to engulf invading protozoa. In the blood, neutrophils are inactive but are swept along at high speed. When they receive signals from macrophages at the sites of inflammation, they slow down and leave the blood. In the tissues, they are activated by cytokines and arrive at the battle scene ready to kill. 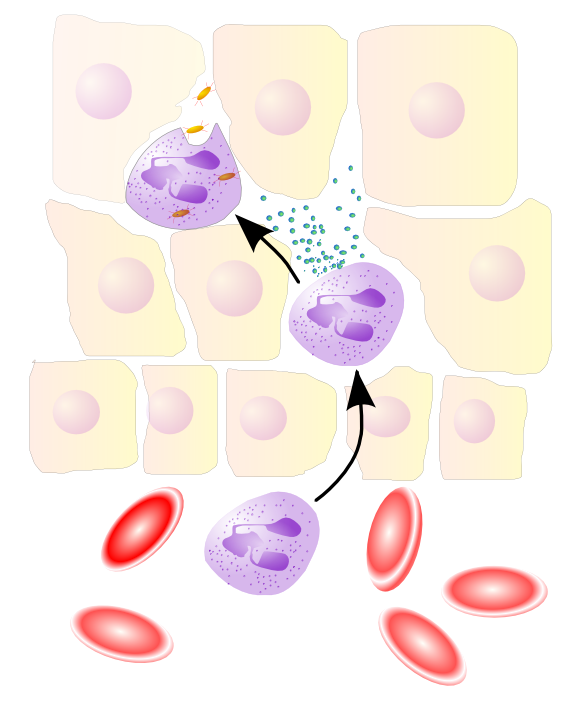 Neutrophils: Neutrophils move through the blood to the site of infection.

When an infection occurs, a chemical "SOS" signal is given off to attract phagocytes to the site. These chemical signals may include proteins from invading bacteria, clotting system peptides, complement products, and cytokines that have been given off by macrophages located in the tissue near the infection site. Another group of chemical attractants are cytokines that recruit neutrophils and monocytes from the blood. To reach the site of infection, phagocytes leave the bloodstream and enter the affected tissues. Signals from the infection cause the endothelial cells that line the blood vessels to make a protein called selectin, which neutrophils stick to when they pass by. Other signals called vasodilators loosen the junctions connecting endothelial cells, allowing the phagocytes to pass through the wall. Chemotaxis is the process by which phagocytes follow the cytokine "scent" to the infected spot. Neutrophils travel across epithelial cell-lined organs to sites of infection, and although this is an important component of fighting infection, the migration itself can result in disease-like symptoms. During an infection, millions of neutrophils are recruited from the blood, but they die after a few days.

Antigen-presenting Cells: B and T cells

B and T cells, parts of the adaptive immune response, contain receptors that can identify antigens derived from pathogens.

The adaptive, or acquired, immune response to an initial infection takes days or even weeks to become established, much longer than the innate response. However, adaptive immunity is more specific to an invading pathogen and can fight back much more quickly than the innate response if it has seen the pathogen before. Adaptive immunity occurs after exposure to an antigen either from a pathogen or a vaccination. An antigen is a molecule that binds to a specific antibody, often stimulating a response in the immune system as a result.

The adaptive immune response activates when the innate immune response insufficiently controls an infection. In fact, without information from the innate immune system, the adaptive response could not be mobilized. There are two types of adaptive responses: the cell-mediated immune response, which is controlled by activated T cells, and the humoral immune response, which is controlled by activated B cells and antibodies. Upon infection, activated T and B cells that have surface binding sites with specificity to the molecules on the pathogen greatly increase in number and attack the invading pathogen. Their attack can kill pathogens directly or they can secrete antibodies that enhance the phagocytosis of pathogens and disrupt the infection. Adaptive immunity also involves a memory, which gives the host long-term protection from reinfection by the same type of pathogen; upon re-exposure, this host memory will facilitate a rapid and powerful response.

B and T Cells

Lymphocytes, which are white blood cells, are formed with other blood cells in the red bone marrow found in many flat bones, such as the shoulder or pelvic bones. The two types of lymphocytes of the adaptive immune response are B and T cells. Whether an immature lymphocyte becomes a B cell or T cell depends on where in the body it matures. The B cells remain in the bone marrow to mature (hence the name "B" for "bone marrow"), while T cells migrate to the thymus, where they mature (hence the name "T" for "thymus"). 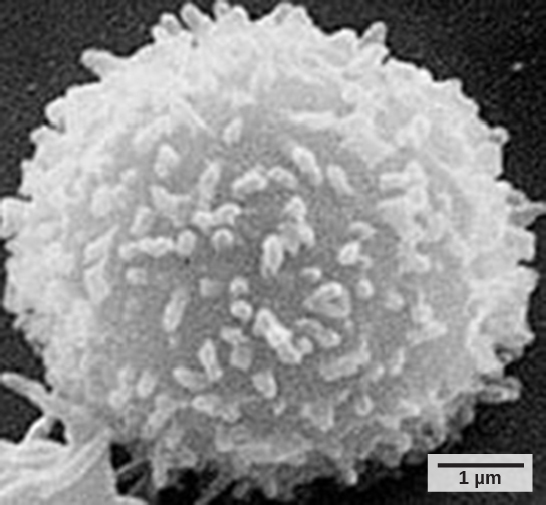 T cell by SEM: This scanning electron micrograph shows a T lymphocyte. T and B cells are indistinguishable by light microscopy, but can be differentiated experimentally by probing their surface receptors.

The maturation of a B or T cell involves becoming immunocompetent, meaning that it can recognize and bind to a specific molecule or antigen. This recognition, which is central to the functioning of the adaptive immune response, results from the presence of highly specific receptors on the surfaces of B and T cells. On B cells, these receptors contain antibodies, which are responsible for antigen binding. An antibody is specific for one particular antigen; typically, it will not bind to anything else. Upon antigen binding to a B cell receptor, a signal is sent into the B cell to turn on an immune response. 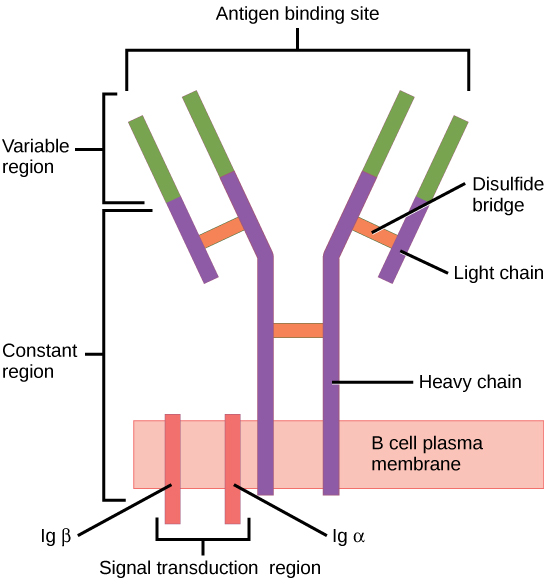 B cell receptors: B cell receptors are embedded in the membranes of B cells and bind a variety of antigens through their variable regions, or antibodies. The signal transduction region transfers the signal into the cell.

Meanwhile, T cell receptors are responsible for the recognition of pathogenic antigens by T cells. Unlike B cells, T cells do not directly recognize antigens. Instead, they recognize antigens presented on major histocompatibility complexes ( MHCs ) that cells use to display which proteins are inside of them. If a cell is infected, it will present antigenic portions of the infecting pathogen on its MHC for recognition by T cells, which will then mount an appropriate immune response. Unlike antibodies, which can typically bind one and only one antigen, T cell receptors have more flexibility in their capacity to recognize antigens presented by MHCs. 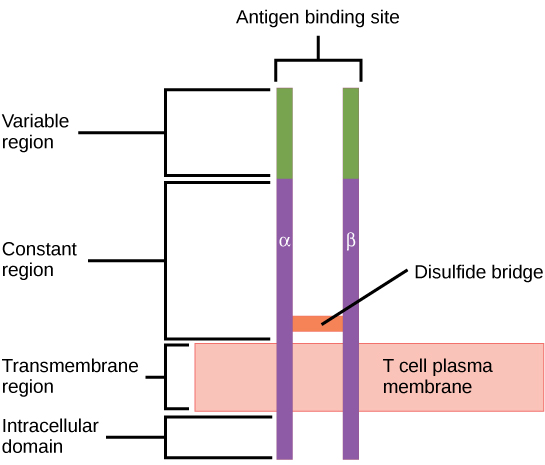 It is the specific pathogen recognition (via binding antigens) of B and T cells that allows the adaptive immune response to adapt. During the maturation process, B and T cells that bind too strongly to the body's own cells' antigens are eliminated in order to minimize an immune response against the body's own tissues. Only those cells that react weakly to the body's own cells will remain. This process occurs during fetal development and continues throughout life. Once they are immunocompetent, the T and B cells migrate to the spleen and lymph nodes where they remain until they are called on during an infection. B cells are involved in the humoral immune response, which targets pathogens loose in blood and lymph, while T cells are involved in the cell-mediated immune response, which targets infected cells.