Retroviruses are viruses that are able to reverse transcribe their RNA genome into DNA, which is then integrated into a host genome.

Identify the unique features of retroviruses

The virus itself stores its nucleic acid in the form of an mRNA genome and serves as a means of delivering that genome into cells it targets as an obligate parasite (a parasite that cannot live without its host). That process of delivering the genome into cells constitutes the infection. Once in the host's cell, the RNA strands undergo reverse transcription in the cytoplasm and are integrated into the host's genome, at which point the retroviral DNA is referred to as a provirus. It is difficult to detect the virus until it has infected the host, where the provirus can stay for months, even years, before becoming active and making new infectious viral particles.

In most viruses, DNA is transcribed into RNA, and then RNA is translated into protein. Retroviruses, however, function differently. Their RNA is reverse-transcribed into DNA, which is integrated into the host cell's genome (when it becomes a provirus), and then undergoes the usual transcription and translation processes to express the genes carried by the virus. So, the information contained in a retroviral gene is used to generate the corresponding protein via the sequence: RNA → DNA → RNA → protein. Retroviruses can be pathogens of many different hosts, including humans. A notable retrovirus is Human immunodeficiency virus (HIV), the virus responsible for acquired immunodeficiency syndrome (AIDS). As well as infecting a host, some retroviruses can cause cancer. 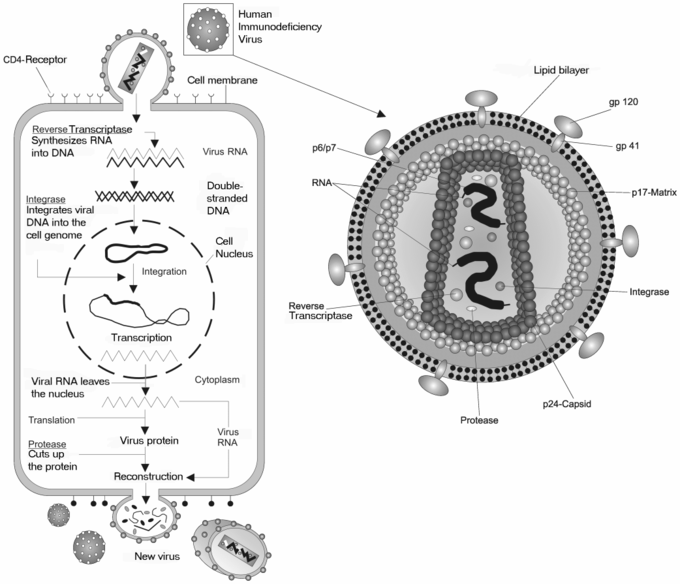 HIV viral life cycle: This diagram depicts the viral life cycle of HIV, from infection, integration into a host genome, reconstruction, and formation of new viral particles. The inset on the left depicts an individual HIV particle.

Finally, retroviruses are proving to be valuable research tools in molecular biology and have been successfully used in gene delivery systems.

The attachment and fusion of HIV virons to host cells are crucial to HIV infection.


HIV entry is the earliest stage of infection in the HIV viral life cycle, occurring when the HIV virus comes into contact with the host cell and introduces viral material into the cell. HIV enters macrophages and CD4-positive T cells (CD4 is a glycoprotein receptor found on cells) by the adsorption of glycoproteins on its surface to receptors on the target cell, followed by fusion of the viral envelope with the cell membrane and the release of the HIV capsid into the cell.

HIV Replication: Steps in the HIV Replication Cycle: Fusion of the HIV cell to the host cell surface.Cell Entry, HIV RNA, reverse transcriptase, integrase, and other viral proteins enter the host cell.Viral DNA is formed by reverse transcription.Viral DNA is transported across the nucleus and integrates into the host DNA.New viral RNA is used as genomic RNA to make viral proteins.New viral RNA and proteins move to cell surface and a new, immature, HIV virus forms.Virus maturation and protease release of individual HIV proteins.

Entry to the cell begins through interaction of the trimeric envelope complex and both CD4 and a chemokine receptor on the host cell on the cell surface. The HIV coat protein, gp120, binds to integrin α4β7, activating LFA-1 (the central integrin involved in the establishment of bridges known as "virological synapses") which facilitate efficient cell-to-cell spreading of HIV-1. 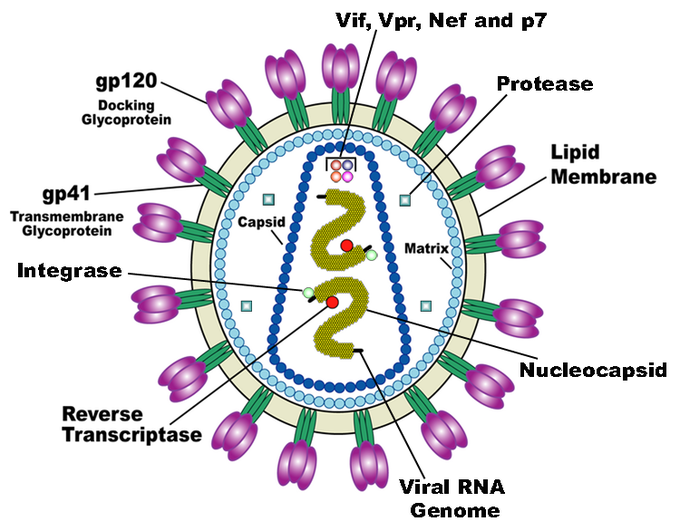 Origin of HIV-1 M: An Example of Molecular Clock Application: The attachment and fusion of HIV virons to host cells are crucial to allowing HIV infection to occur. Shown in purple is gp120 and in green gp41, two proteins crucial in viral docking to host cells.

After attachment, the HIV viron must next fuse with the host cell. The first step in fusion begins after the attachment of the CD4 binding domains of gp120 to CD4. Once gp120 is bound with the CD4 protein, the envelope complex undergoes a structural change, exposing the chemokine binding domains of gp120 and allowing them to interact with the target chemokine receptor. This allows for a more stable two-pronged attachment, which allows the N-terminal fusion peptide gp41 to penetrate the cell membrane. Repeat sequences in gp41, known as HR1 and HR2, then interact, causing the collapse of the extracellular portion of gp41 into a hairpin. This loop structure brings the virus and cell membranes close together, allowing fusion of the membranes and subsequent entry of the viral capsid.

After HIV has bound to the target cell, the HIV RNA and various enzymes (including reverse transcriptase, integrase, ribonuclease, and protease) are injected into the cell. Because HIV attachment is critical for the HIV replication cycle, understanding the specific mechanisms through which HIV attachment occurs has implications for potential treatments of HIV.

The retroviral genome contains the elements needed for reverse transcription and all other activities of a retrovirus.

Discover the features of retroviral genomes


The retroviral while in the viral capsid consists of a dimer RNA. It has a cap at the 5' end and a poly(A) tail at the 3' end. The RNA genome also has terminal noncoding regions, which are important in replication, and internal regions that encode virion proteins for gene expression.

Inbetween the 5' and 3' region is the protein encoding region of the retrovirus, consisting of gag proteins, protease (PR), pol proteins and env proteins. Gag proteins are major components of the viral capsid, which are about 2,000-4,000 copies per virion. Protease is expressed differently in different viruses. It functions in proteolytic cleavages during virion maturation to make mature gag and pol proteins. Pol proteins, such as the reverse transcriptase (RT), are responsible for synthesis of viral DNA and integration into host DNA after infection. Finally, env proteins play a role in association and entry of virion into the host cell. Possessing a functional copy of an env gene is what makes retroviruses distinct from retroelements. The env gene serves three distinct functions: enabling the retrovirus to enter/exit host cells through endosomal membrane trafficking, protection from the extracellular environment via the lipid bilayer, and the ability to enter cells. The ability of the retrovirus to bind to its target host cell using specific cell-surface receptors is given by the surface component (SU) of the env, while the ability of the retrovirus to enter the cell via membrane fusion is imparted by the membrane-anchored trans-membrane component (TM). Thus, the env protein is what enables the retrovirus to be infectious.

Please refer to the figure, in it you see all the elements of a retroviral genome and how they interact to contribute to retroviral reverse transcription and integration.

HIV replication depends on a complex, coordinated series of events where the virus integrates into the DNA of host cells.

Compare and contrast HIV replication to other viruses


Human immunodeficiency virus (HIV) is a lentivirus (a member of the retrovirus family) that causes acquired immunodeficiency syndrome ( AIDS ). AIDS is a condition in humans in which progressive failure of the immune system allows life-threatening opportunistic infections and cancers to thrive.

HIV can infect dendritic cells (DCs). DCs are one of the first cells encountered by the virus during sexual transmission. They are currently thought to play an important role by transmitting HIV to T-cells when the virus is captured in the mucosa by DCs. HIV enters macrophages and T cells by the adsorption of glycoproteins on its surface to receptors on the target cell. This is followed by fusion of the viral envelope with the cell membrane and the release of the HIV capsid into the cell.

HIV Replication: Steps in the HIV Replication Cycle: Fusion of the HIV cell to the host cell surface.Cell Entry, HIV RNA, reverse transcriptase, integrase, and other viral proteins enter the host cell.Viral DNA is formed by reverse transcription.Viral DNA is transported across the nucleus and integrates into the host DNA.New viral RNA is used as genomic RNA to make viral proteins.New viral RNA and proteins move to cell surface and a new, immature, HIV virus forms.Virus maturation and protease release of individual HIV proteins.

Shortly after the viral capsid enters the cell, an enzyme called reverse transcriptase liberates the single-stranded (+)RNA genome from the attached viral proteins and copies it into a complementary DNA (cDNA) molecule. The process of reverse transcription is extremely error-prone, and the resulting mutations may cause drug resistance or allow the virus to evade the body's immune system. The reverse transcriptase also has ribonuclease activity that degrades the viral RNA during the synthesis of cDNA, as well as DNA-dependent DNA polymerase activity that creates a sense DNA from the antisense cDNA. Together, the cDNA and its complement form a double-stranded viral DNA that is then transported into the cell nucleus.

This integrated viral DNA may then lie dormant, in the latent stage of HIV infection. To actively produce the virus, certain cellular transcription factors need to be present. The most important of these is NF-κB (NF kappa B), which is upregulated when T-cells become activated. This means that those cells most likely to be killed by HIV are those currently fighting infection. During viral replication, the integrated DNA provirus is transcribed into mRNA, which is then spliced into smaller pieces. These small pieces are exported from the nucleus into the cytoplasm, where they are translated into the regulatory proteins Tat (which encourages new virus production) and Rev.

As the newly produced Rev protein accumulates in the nucleus, it binds to viral mRNAs and allows unspliced RNAs to leave the nucleus, where they are otherwise retained until spliced. At this stage, the structural proteins Gag and Env are produced from the full-length mRNA. The full-length RNA is actually the virus genome; it binds to the Gag protein and is packaged into new virus particles. The final step of the viral cycle, assembly of new HIV-1 virions, begins at the plasma membrane of the host cell. The Env polyprotein goes through the endoplasmic reticulum and is transported to the Golgi complex. There, it is cleaved by HIV protease and processed into the two HIV envelope glycoproteins, gp41 and gp120. These are transported to the plasma membrane of the host cell where gp41 anchors gp120 to the membrane of the infected cell. The Gag (p55) and Gag-Pol (p160) polyproteins also associate with the inner surface of the plasma membrane along with the HIV genomic RNA as the forming virion begins to bud from the host cell.

Maturation occurs either in the forming bud or in the immature virion after it buds from the host cell. During maturation, HIV proteases cleave the polyproteins into individual functional HIV proteins. This cleavage step can be inhibited by protease inhibitors. The various structural components then assemble to produce a mature HIV virion. The mature virion is then able to infect another cell.

RNA virus is a virus which has ribonucleic acid.docx

Viruses are the only living entities that may exchange genetic sequences as module.docx