Hooke's law of elasticity is an approximation that states that the extension of a spring is directly proportional to the load applied to it.


In mechanics (physics), Hooke's law is an approximation of the response of elastic (i.e., springlike) bodies. It states: the extension of a spring is in direct proportion with the load applied to it. For instance, the spring is pulled downwards with either no load, Fp, or twice Fp. 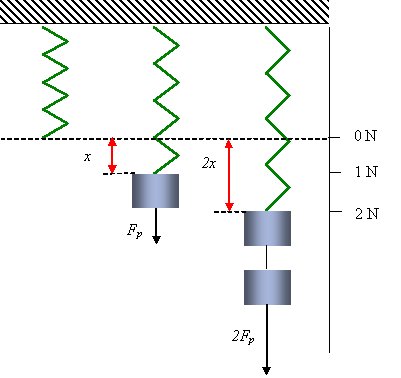 Diagram of Hooke's Law: The extension of the spring is linearly proportional to the force.


Many materials obey this law of elasticity as long as the load does not exceed the material's elastic limit. Materials for which Hooke's law is a useful approximation are known as linear-elastic or "Hookean" materials. Hookean materials are broadly defined and include springs as well as muscular layers of the heart. In simple terms, Hooke's law says that stress is directly proportional to strain. Mathematically, Hooke's law is stated as:

It's possible for multiple springs to act on the same point. In such a case, Hooke's law can still be applied. As with any other set of forces, the forces of many springs can be combined into one resultant force.

When Hooke's law holds, the behavior is linear; if shown on a graph, the line depicting force as a function of displacement should show a direct variation. There is a negative sign on the right hand side of the equation because the restoring force always acts in the opposite direction of the displacement (for example, when a spring is stretched to the left, it pulls back to the right).

Hooke's law is named after the 17th century British physicist Robert Hooke, and was first stated in 1660 as a Latin anagram, whose solution Hooke published in 1678 as Ut tensio, sic vis, meaning, "As the extension, so the force." 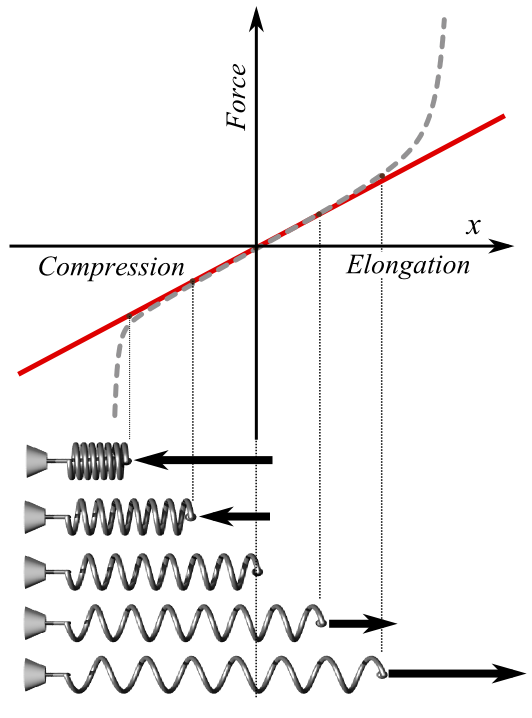 Hooke's Law: The red line in this graph illustrates how force, F, varies with position according to Hooke's law. The slope of this line corresponds to the spring constant k. The dotted line shows what the actual (experimental) plot of force might look like. The pictures of spring states at the bottom of the graph correspond to some points of the plot; the middle one is in the relaxed state (no force applied).

If a force results in only deformation, with no thermal, sound, or kinetic energy, the work done is stored as elastic potential energy.

Express elastic energy stored in a spring in a mathematical form

In order to produce a deformation, work must be done. That is, a force must be exerted through a distance, whether you pluck a guitar string or compress a car spring. If the only result is deformation and no work goes into thermal, sound, or kinetic energy, then all the work is initially stored in the deformed object as some form of potential energy. Elastic energy is the potential mechanical energy stored in the configuration of a material or physical system when work is performed to distort its volume or shape. For example, the potential energy PEel stored in a spring is

where k is the elastic constant and x is the displacement.

It is possible to calculate the work done in deforming a system in order to find the energy stored. This work is performed by an applied force Fapp. The applied force is exactly opposite to the restoring force (action-reaction), and so
Fapp​=kx
. A graph shows the applied force versus deformation x for a system that can be described by Hooke's law. Work done on the system is force multiplied by distance, which equals the area under the curve, or
21​kx2
(Method A in the figure). Another way to determine the work is to note that the force increases linearly from 0 to kx, so that the average force is
21​kx
, the distance moved is x, and thus

Elastic energy of or within a substance is static energy of configuration. It corresponds to energy stored principally by changing the inter-atomic distances between nuclei. Thermal energy is the randomized distribution of kinetic energy within the material, resulting in statistical fluctuations of the material about the equilibrium configuration. There is some interaction, however. For example, for some solid objects, twisting, bending, and other distortions may generate thermal energy, causing the material's temperature to rise. This energy can also produce macroscopic vibrations sufficiently lacking in randomization to lead to oscillations that are merely the exchange between (elastic) potential energy within the object and the kinetic energy of motion of the object as a whole.

14. What is State Hooke law.docx.pdf

PHYSICS 123A •  Institute of Management Technology

Hooke's Law is a law of physic that is name after an English physician, Robert Hooke, and he first a