An object moving with constant velocity must have a constant speed in a constant direction.

Newton's second law (
F=ma
) suggests that when a force is applied to an object, the object would experience acceleration. If the acceleration is 0, the object shouldn't have any external forces applied on it. Mathematically, this can be shown as the following:

If an object is moving at constant velocity, the graph of distance vs. time (
x
vs.
t
) shows the same change in position over each interval of time. Therefore the motion of an object at constant velocity is represented by a straight line:
x=x0​+vt
, where
x0​
is the displacement when
t=0
(or at the y-axis intercept). 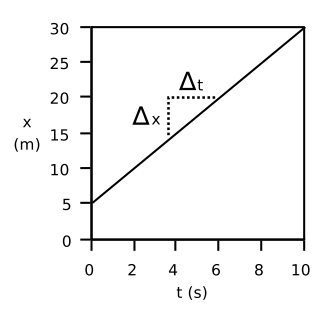 Motion with Constant Velocity: When an object is moving with constant velocity, it does not change direction nor speed and therefore is represented as a straight line when graphed as distance over time.

Analyzing two-dimensional projectile motion is done by breaking it into two motions: along the horizontal and vertical axes.

Analyze a two-dimensional projectile motion along horizontal and vertical axes 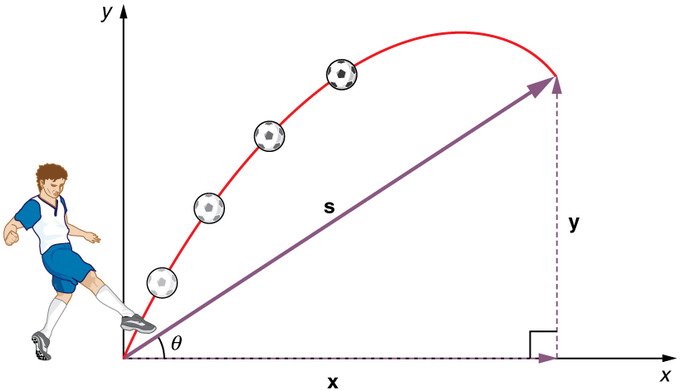 Projectile Motion: Throwing a rock or kicking a ball generally produces a projectile pattern of motion that has both a vertical and a horizontal component.

The most important fact to remember is that motion along perpendicular axes are independent and thus can be analyzed separately. The key to analyzing two-dimensional projectile motion is to break it into two motions, one along the horizontal axis and the other along the vertical. To describe motion we must deal with velocity and acceleration, as well as with displacement.

We will assume all forces except for gravity (such as air resistance and friction, for example) are negligible. The components of acceleration are then very simple:
ay​=−g=−9.81s2m​
(we assume that the motion occurs at small enough heights near the surface of the earth so that the acceleration due to gravity is constant). Because the acceleration due to gravity is along the vertical direction only,
ax​=0
. Thus, the kinematic equations describing the motion along the
x
and
y
directions respectively, can be used:

Motion in one and two dimensions.pdf