The Law of Universal Gravitation

Express the Law of Universal Gravitation in mathematical form


While an apple might not have struck Sir Isaac Newton's head as myth suggests, the falling of one did inspire Newton to one of the great discoveries in mechanics: The Law of Universal Gravitation. Pondering why the apple never drops sideways or upwards or any other direction except perpendicular to the ground, Newton realized that the Earth itself must be responsible for the apple's downward motion.

Theorizing that this force must be proportional to the masses of the two objects involved, and using previous intuition about the inverse-square relationship of the force between the earth and the moon, Newton was able to formulate a general physical law by induction.

The Law of Universal Gravitation states that every point mass attracts every other point mass in the universe by a force pointing in a straight line between the centers-of-mass of both points, and this force is proportional to the masses of the objects and inversely proportional to their separation This attractive force always points inward, from one point to the other. The Law applies to all objects with masses, big or small. Two big objects can be considered as point-like masses, if the distance between them is very large compared to their sizes or if they are spherically symmetric. For these cases the mass of each object can be represented as a point mass located at its center-of-mass.

The Shell Theorem states that a spherically symmetric object affects other objects as if all of its mass were concentrated at its center.

The Law of Universal Gravitation states that the gravitational force between two points of mass is proportional to the magnitudes of their masses and the inverse-square of their separation,
d
:

However, most objects are not point particles. Finding the gravitational force between three-dimensional objects requires treating them as points in space. For highly symmetric shapes such as spheres or spherical shells, finding this point is simple.

Isaac Newton proved the Shell Theorem, which states that:

Given that a sphere can be thought of as a collection of infinitesimally thin, concentric, spherical shells (like the layers of an onion), then it can be shown that a corollary of the Shell Theorem is that the force exerted in an object inside of a solid sphere is only dependent on the mass of the sphere inside of the radius at which the object is. That is because shells at a greater radius than the one at which the object is, do not contribute a force to an object inside of them (Statement 2 of theorem).

When considering the gravitational force exerted on an object at a point inside or outside a uniform spherically symmetric object of radius
R
, there are two simple and distinct situations that must be examined: the case of a hollow spherical shell, and that of a solid sphere with uniformly distributed mass.

The net gravitational force that a spherical shell of mass
M
exerts on a body outside of it, is the vector sum of the gravitational forces acted by each part of the shell on the outside object, which add up to a net force acting as if mass
M
is concentrated on a point at the center of the sphere (Statement 1 of Shell Theorem).

Diagram used in the proof of the Shell Theorem: This diagram outlines the geometry considered when proving The Shell Theorem. In particular, in this case a spherical shell of mass

M
(left side of figure) exerts a force on mass
m
(right side of the figure) outside of it. The surface area of a thin slice of the sphere is shown in color. (Note: The proof of the theorem is not presented here. Interested readers can explore further using the sources listed at the bottom of this article.)

The second situation we will examine is for a solid, uniform sphere of mass
M
and radius
R
, exerting a force on a body of mass
m
at a radius
d
inside of it (that is,
d<R
). We can use the results and corollaries of the Shell Theorem to analyze this case. The contribution of all shells of the sphere at a radius (or distance) greater than
d
from the sphere's center-of-mass can be ignored (see above corollary of the Shell Theorem). Only the mass of the sphere within the desired radius
M<d​
(that is the mass of the sphere inside
d
) is relevant, and can be considered as a point mass at the center of the sphere. So, the gravitational force acting upon point mass
m
is:

(
ρ
is the mass density of the sphere and we are assuming that it does not depend on the radius. That is, the sphere's mass is uniformly distributed.)

Therefore, combining the above two equations we get:

which shows that mass
m
feels a force that is linearly proportional to its distance,
d
, from the sphere's center of mass.

As in the case of hollow spherical shells, the net gravitational force that a solid sphere of uniformly distributed mass
M
exerts on a body outside of it, is the vector sum of the gravitational forces acted by each shell of the sphere on the outside object. The resulting net gravitational force acts as if mass
M
is concentrated on a point at the center of the sphere, which is the center of mass, or COM (Statement 1 of Shell Theorem). More generally, this result is true even if the mass
M
is not uniformly distributed, but its density varies radially (as is the case for planets).

Weight of the Earth

When the bodies have spatial extent, gravitational force is calculated by summing the contributions of point masses which constitute them.

where
F
is the force between the masses,
G
is the gravitational constant,
m1​
is the first mass,
m2​
is the second mass and
r
is the distance between the centers of the masses.

If the bodies in question have spatial extent (rather than being theoretical point masses), then the gravitational force between them is calculated by summing the contributions of the notional point masses which constitute the bodies. In the limit, as the component point masses become "infinitely small", this entails integrating the force (in vector form, see below) over the extents of the two bodies.

In this way it can be shown that an object with a spherically-symmetric distribution of mass exerts the same gravitational attraction on external bodies as if all the object's mass were concentrated at a point at its center.

As a consequence, for example, within a shell of uniform thickness and density there is no net gravitational acceleration anywhere within the hollow sphere. Furthermore, inside a uniform sphere the gravity increases linearly with the distance from the center; the increase due to the additional mass is 1.5 times the decrease due to the larger distance from the center. Thus, if a spherically symmetric body has a uniform core and a uniform mantle with a density that is less than
32​
of that of the core, then the gravity initially decreases outwardly beyond the boundary, and if the sphere is large enough, further outward the gravity increases again, and eventually it exceeds the gravity at the core/mantle boundary.

The gravity of the Earth may be highest at the core/mantle boundary, as shown in Figure 1: 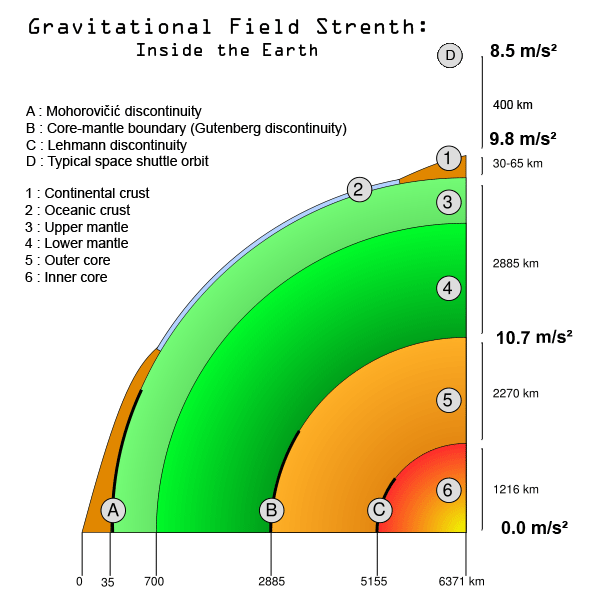 Gravitational Field of Earth: Diagram of the gravitational field strength within the Earth.

BSCE 123 •  University of the Philippines Diliman

PHYSICS 62 •  University of the Philippines Diliman

Question Newtons law for universal gravitation can be written as F.docx