Electric current is the flow of electric charge and resistance is the opposition to that flow.

Explain difference between conductor and resistor

Introduction to Electric Current and Resistance

From ceiling lights to circuit chips, from power steering to Internet browsing, electricity provides the basis for our technology and civilization. The firing of neurons in your brain is also an example of electric current - that is, the movement of electric charge through a conductive medium. In electric circuits, this charge is often carried by moving electrons in a wire. It can also be carried by ions in an electrolyte, or by both ions and electrons such as in a plasma.

When we speak of electric current, often we are referring to a specific quantity - the rate at which charge flows. A large current, such as that used to start a truck engine, moves a large amount of charge in a small time, whereas a small current, such as that used to operate a hand-held calculator, moves a small amount of charge over a long period of time. In equation form, electric current I is defined to be

where Q is the amount of charge passing through a given area in time t. The SI unit for current is the ampere (A), named for the French physicist André-Marie Ampère (1775–1836). Since I=ΔQ/Δt, we see that an ampere is one coulomb per second:

The flow of electricity requires a medium in which charge can flow. We call an object or medium that allows charge to flow a conductor, while the empirical measure of a material's ability to conduct charge is called the electrical conductance. The SI unit for conductance is the siemens (S). 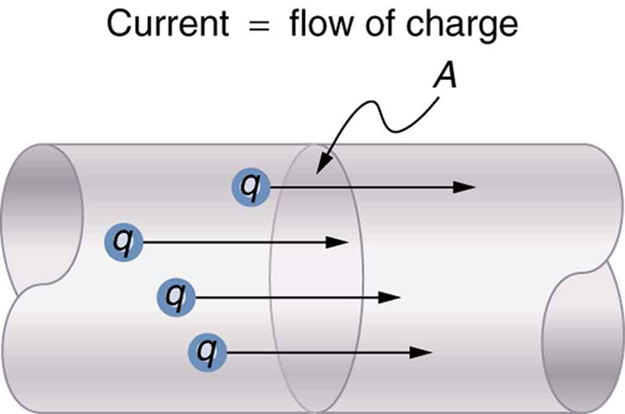 Electric Current: The rate of flow of charge is current. An ampere is the flow of one coulomb through an area in one second.

The opposite of conductance is resistance - a quantity that describes how strongly a material opposes the flow of electric current. An object or medium that has high electrical resistance is called a resistor. We will see that the resistance of an object depends on its shape and the material of which it is composed. The SI unit for resistance is the ohm (symbol: ).

A useful and practical way to learn about electric current and resistance is to study circuits. The figure above shows a simple circuit and the standard schematic representation of a battery, conducting path, and load (a resistor). Schematics are very useful in visualizing the main features of a circuit. A single schematic can represent a wide variety of situations. The schematic in (b), for example, can represent anything from a truck battery connected to a headlight lighting the street in front of the truck to a small battery connected to a penlight lighting a keyhole in a door. Such schematics are useful because the analysis is the same for a wide variety of situations. We need to understand a few schematics to apply the concepts and analysis to many more situations. 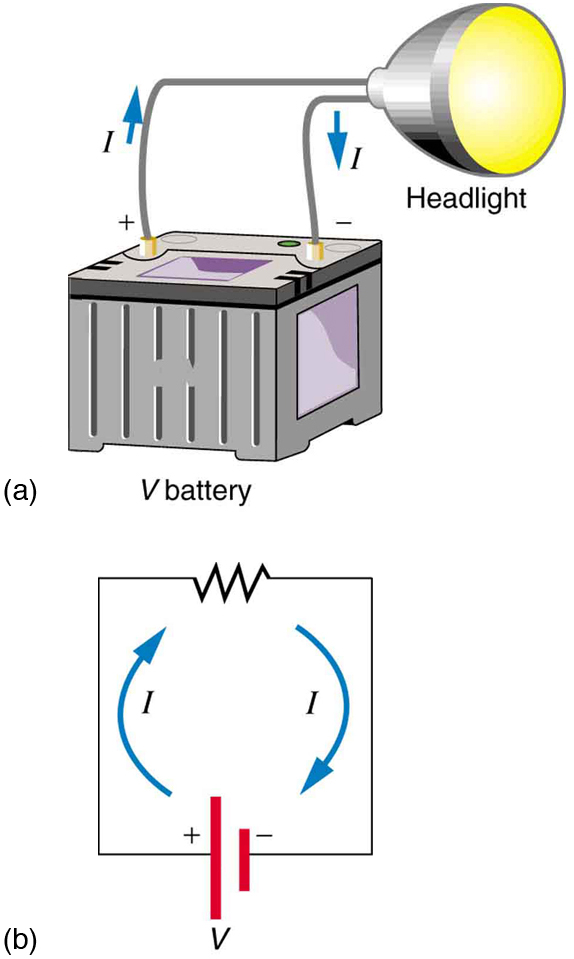 Simple Electric Circuit: (a) A simple electric circuit. A closed path for current to flow through is supplied by conducting wires connecting a load to the terminals of a battery. (b) In this schematic, the battery is represented by the two parallel red lines, conducting wires are shown as straight lines, and the zigzag represents the load. The schematic represents a wide variety of similar circuits.

Armed with these basics, we'll begin to tackle the harder details of this topic in the next section.

ELEN 20044 •  Polytechnic University of the Philippines

ENG'G 1A •  Technological University of the Philippines Cavite