The limbic system, autonomic nervous system, and reticular activating system interact in the processing of emotion.


Emotions can be explained in biological and neurological terms. The limbic system, autonomic nervous system, and reticular activating system all interact to assist the body in experiencing and processing emotions.

The limbic system is the area of the brain most heavily implicated in emotion and memory. Its structures include the hypothalamus, thalamus, amygdala, and hippocampus. The hypothalamus plays a role in the activation of the sympathetic nervous system, which is a part of any emotional reaction. The thalamus serves as a sensory relay center; its neurons project signals to both the amygdala and the higher cortical regions for further processing. The amygdala plays a role in processing emotional information and sending that information on to cortical structures. The hippocampus integrates emotional experience with cognition. 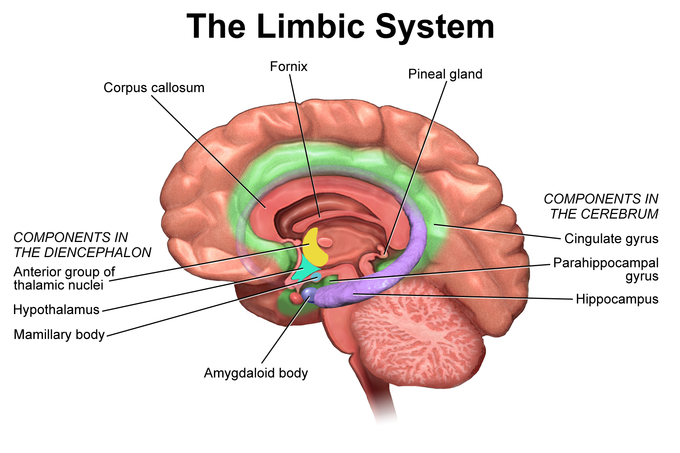 The processes of the limbic system control our physical and emotional responses to environmental stimuli. This system categorizes the experience of an emotion as a pleasant or unpleasant mental state. Based on this categorization, neurochemicals such as dopamine, noradrenaline, and serotonin increase or decrease, causing the brain's activity level to fluctuate and resulting in changes in body movement, gestures, and poses.

The amygdala, located in the left and right temporal lobes of the brain, has received a great deal of attention from researchers investigating the biological basis of emotions, particularly of fear and anxiety (Blackford & Pine, 2012; Goosens & Maren, 2002; Maren, Phan, & Liberzon, 2013). The amygdala plays a decisive role in the emotional evaluation and recognition of situations as well as in the analysis of potential threats. It handles external stimuli and induces vegetative reactions.

Two parts of the amygdala include the basolateral complex and the central nucleus. The basolateral complex has dense connections with a variety of sensory areas of the brain. It plays a critical role in classical conditioning and in attaching emotional value to learning processes and memories. The central nucleus plays a role in attention. It has connections with the hypothalamus and various areas of the brainstem and regulates the activity of the autonomic nervous and endocrine systems (Pessoa, 2010).

Research suggests that the amygdala is involved in mood and anxiety disorders. Changes in amygdala structure and function have been found in adolescents who either are at risk for or have been diagnosed with a mood or anxiety disorder (Miguel-Hidalgo, 2013; Qin et al., 2013). It has also been suggested that functional differences in the amygdala could be used to differentiate individuals suffering from bipolar disorder from those suffering from major depressive disorder (Fournier, Keener, Almeida, Kronhaus, & Phillips, 2013).

The hippocampus is also involved in emotional processing. As with the amygdala, research has demonstrated that hippocampal structure and function are linked to a variety of mood and anxiety disorders. Individuals suffering from posttraumatic stress disorder ( PTSD ) show marked reductions in volume in several parts of the hippocampus, which may be the result of decreased levels of neurogenesis and dendritic branching (the generation of new neurons and the generation of new dendrites in existing neurons, respectively) (Wang et al., 2010). While it is impossible to determine causation, studies have found improvements in behavior as well as increase in hippocampal volume following either pharmacological or cognitive behavioral therapy in individuals suffering from PTSD (Bremner & Vermetten, 2004; Levy-Gigi, Szabó, Kelemen, & Kéri, 2013).

The autonomic nervous system (ANS) is part of the peripheral nervous system in humans. It is regulated by the hypothalamus and controls our internal organs and glands, including such processes as pulse, blood pressure, breathing, and arousal in response to emotional circumstances. The ANS is generally thought to be outside of voluntary control.

The ANS can be further subdivided into the sympathetic and parasympathetic nervous systems. When activated, the sympathetic nervous system (SNS) controls the endocrine glands to prepare the body for emergency action. SNS activation causes the adrenal glands to produce epinephrine (also known as adrenaline), which results in the "fight-or-flight" response. The fight-or-flight response involves increased blood flow to the muscles, increased heart rate, and other physiological responses that enable the body to move more quickly and feel less pain in situations perceived to be dangerous.

Conversely, the parasympathetic nervous system (PN) functions when the body is relaxed or at rest; it helps the body store energy for future use. Effects of PN activation include increased stomach activity and decreased blood flow to the muscles.

The parasympathetic and sympathetic divisions of the ANS have complementary functions, and they operate in tandem to maintain the body’s equilibrium. Equilibrium of the body, in which biological conditions (such as body temperature) are maintained at optimal levels, is known as homeostasis.

The reticular activating system (RAS) is a network of neurons that runs through the core of the hindbrain and into the midbrain and forebrain. The RAS is made up of the midbrain reticular formation, the mesencephalic nucleus (mesencephalon), the thalamic intralaminar nucleus (centromedian nucleus), the dorsal hypothalamus, and the tegmentum. 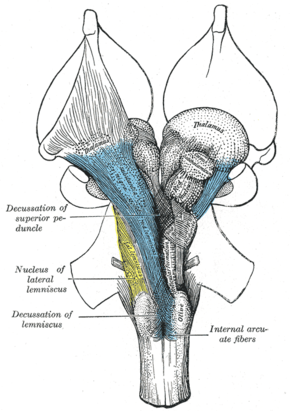 The RAS is involved with arousal and attention, sleep and wakefulness, and the control of reflexes. The RAS is believed to first arouse the cortex and then maintain its wakefulness so that sensory information and emotion can be interpreted more effectively. It helps us fulfill goals by directing our concentration toward them and plays a role in individuals' responses to situations and events.

Roles of the neurological systm.docx

Understanding the Self - Guide Questions.pdf

emotion and the brain fin.docx

BIO 123 •  Lyceum of the Philippines Univ

Biology of Emotions_ The Limbic System.docx