Summarize the diagnostic criteria, etiology, and treatment of Alzheimer's Disease and Parkinson's Disease


Neurocognitive functions are cognitive functions closely linked to the function of particular brain areas, neural pathways, or cortical networks in the brain substrate at the cellular molecular level. Neuropsychology and cognitive neuroscience are two disciplines that seek to understand how the structure and function of the brain relates to perception, memory, and thought processes behind behavior. Neurocognitive disorders (NCDs), previously referred to in the DSM-IV-TR as dementia, are disorders that involve impairments in cognitive abilities such as memory, problem solving, and perception.

Neurocognitive Disorder Due to Alzheimer's Disease

Alzheimer's disease accounts for 60% to 70% of cases of dementia. It is a chronic neurodegenerative disease that usually starts slowly and gets worse over time. The most common early symptom is difficulty in remembering recent events (short-term memory loss). As the disease advances, symptoms can include problems with language, disorientation (including easily getting lost), mood swings, loss of motivation, not managing self care, and behavioral issues. As a person's condition declines, they often withdraw from family and society. Gradually, bodily functions are lost, ultimately leading to death. Although the speed of progression can vary, the average life expectancy following diagnosis is three to nine years.

A probable diagnosis for Alzheimer's disease is based on the history of the illness and cognitive testing with medical imaging and blood tests to rule out other possible causes. Initial symptoms are often mistaken for normal ageing; examination of brain tissue is needed for a definite diagnosis.

The 5th edition of the DSM (DSM-5) categorize NCDs as either mild or major. What was previously referred to as dementia now constitutes most forms of major NCDs, while the diagnosis of mild NCD is reserved for cognitive symptoms that do not qualify for a major NCD. In order to be diagnosed, a person must exhibit a cognitive decline and some impairment in cognitive functioning. For a diagnosis of mild NCD, the person must still be able to live and perform everyday activities independently.

The cause of Alzheimer's disease is poorly understood. About 70% of the risk is believed to be genetic with many genes usually involved. Other risk factors include a history of head injuries, depression, or hypertension. The disease process is associated with plaques and tangles in the brain. Alzheimer's disease is characterised by loss of neurons and synapses in the cerebral cortex and certain subcortical regions. This loss results in gross atrophy of the affected regions, including degeneration in the temporal lobe and parietal lobe, and parts of the frontal cortex and cingulate gyrus. 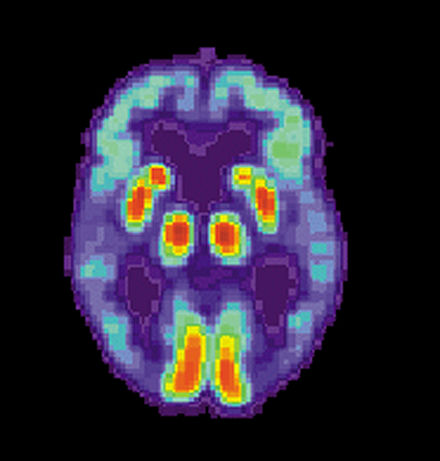 Alzheimer's and the brain: This PET scan shows the image of the brain of a person with Alzheimer's disease, indicating a loss of function in the temporal lobe.

No treatments stop or reverse the progression of Alzheimer's, though some may temporarily improve symptoms. Affected people increasingly rely on others for assistance, often placing a burden on the caregiver; the pressures can include social, psychological, physical, and economic elements. Exercise programs are beneficial with respect to activities of daily living and can potentially improve outcomes. Treatment of behavioral problems or psychosis due to dementia with antipsychotics is common; however, it is often not recommended due to its limited benefit and the increased risk of early death associated with it.

Neurocognitive Disorder Due to Parkinson's Disease

Parkinson's disease is a degenerative disorder of the central nervous system mainly affecting the motor system. Early in the course of the disease, the most obvious symptoms are movement-related; these include shaking, rigidity, slowness of movement and difficulty with walking and gait. Later, thinking and behavioral problems may arise, with dementia commonly occurring in the advanced stages of the disease, whereas depression is the most common psychiatric symptom. Other symptoms include sensory, sleep, and emotional problems. Parkinson's disease is more common in older people, with most cases occurring after the age of 50; when it is seen in young adults, it is called young onset Parkinson's disease.

A physician will diagnose Parkinson's disease from the medical history and a neurological examination. There is no lab test that will clearly identify the disease, but brain scans are sometimes used to rule out disorders that could give rise to similar symptoms. The neurocognitive impairments related to Parkinson's disease are diagnosed using the same criteria listed above for Alzheimer's disease.

Parkinson's disease in most people is idiopathic (having no specific known cause). However, a small proportion of cases can be attributed to known genetic factors. Other factors have been associated with the risk of developing Parkinson's disease, but no causal relationships have been proven. A number of environmental factors have been associated with an increased risk of Parkinson's, including pesticide exposure, head injuries, and heavy metals exposure.

There is no cure for Parkinson's disease, but medications, surgery, and multidisciplinary management can provide relief from the symptoms. There is some evidence that speech or mobility problems can improve with rehabilitation, although studies are scarce and of low quality. Regular physical exercise with or without physiotherapy can be beneficial to maintain and improve mobility, flexibility, strength, gait speed, and quality of life. However, when an exercise program is performed under the supervision of a physiotherapist, there are more improvements in motor symptoms, mental and emotional functions, daily living activities, and quality of life compared to a self-supervised exercise program at home.