PTSD is a disorder that develops after exposure to a traumatic event that involves actual or threatened death or serious injury.

In psychology, trauma is a type of damage to the psyche that occurs as a result of a severely distressing event. Trauma is often the result of an overwhelming amount of stress that exceeds one's ability to cope or integrate the emotions involved with that experience. A traumatic event can involve one experience or repeated events or experiences over time.

Traumatizing, stressful events can have a long-term impact on mental and physical health. Situations where an individual is exposed to a severely stressful experience involving threat of death, injury, or sexual violence can result in the development of post-traumatic stress disorder (PTSD). With this disorder, the trauma experienced is severe enough to cause stress responses for months or even years after the initial incident. The trauma overwhelms the victim's ability to cope psychologically, and memories of the event trigger anxiety and physical stress responses, including the release of cortisol. People with PTSD may experience flashbacks, panic attacks and anxiety, and hypervigilance (extreme attunement to stimuli that remind them of the initial incident).

To be diagnosed with PTSD according to the DSM-5 (2013), a person must first have been exposed to a traumatic event that involves a loss of physical integrity, or risk of serious injury or death, to self or others. In addition, the person must experience intrusions (persistent re-experiencing of the event through flashbacks, distressing dreams, etc.); avoidance (of stimuli associated with the trauma, talking about the trauma, etc.); negative alterations in cognitions and mood (such as decreased capacity to feel certain feelings or distorted self-blame); and alterations in arousal and reactivity (such as difficulty sleeping, problems with anger or concentration, reckless behavior, or heightened startle response). These symptoms must last for more than 1 month and result in clinically significant distress or impairment in multiple domains of life, such as relationships, work, or other daily functioning.

PTSD is believed to be caused by the experience of a traumatic event. A person may experience or witness a stressful event involving death, serious injury, or such threat to the individual or others in a situation in which the individual felt intense fear, horror, or powerlessness. PTSD can occur in individuals with no predisposing conditions; however persons considered at-risk include combat military personnel, rape survivors, victims of natural disasters, concentration camp survivors, and victims of violent crime such as domestic or sexual abuse.

Rates of PTSD are higher in combat veterans than than the average rate for men, with a rate estimated at up to 20% for veterans returning from Iraq and Afghanistan. 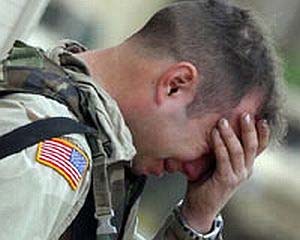 PTSD and Combat Exposure: Many veterans of the wars in Iraq and Afghanistan have faced significant physical, emotional, and relational disruptions. Veterans are at a higher risk than the normal male population for developing PTSD.

A number of psychotherapies have demonstrated usefulness in the treatment of PTSD and other trauma-related problems. Basic counseling practices common to many treatment responses for PTSD include education about the condition and provision of safety and support. The psychotherapy programs with the strongest demonstrated efficacy include cognitive behavioral therapy (CBT), variants of exposure therapy, stress inoculation training (SIT), variants of cognitive therapy (CT), eye movement desensitization and reprocessing (EMDR), and many combinations of these procedures.

EMDR and trauma-focused cognitive behavioral therapy (TFCBT) were recommended as first-line treatments for trauma victims in a 2007 review. Cognitive behavioral therapy (CBT) seeks to change the way a trauma victim feels and acts by changing the patterns of thinking and/or behavior responsible for negative emotions. In CBT, individuals learn to identify thoughts that make them feel afraid or upset and replace them with less distressing thoughts. The goal is to understand how certain thoughts about events cause PTSD-related stress.

A variety of medications have shown adjunctive benefit in reducing PTSD symptoms; however, there is no clear drug treatment for PTSD. Positive symptoms (those that most individuals do not normally experience but are present in people with PTSD, such as re-experiencing or increased arousal) generally respond better to medication than negative symptoms (deficits of normal emotional responses or thought processes, such as avoidance or withdrawal).

Complex post-traumatic stress disorder (C-PTSD) is a psychological injury that results from exposure to prolonged social and/or interpersonal trauma in the context of dependence, captivity, or entrapment (a situation lacking a viable escape route for the victim), which results in the lack or loss of control, helplessness, and deformations of identity and sense of self. Examples include people who have experienced chronic maltreatment, neglect, or abuse by a care-giver; hostages; prisoners of war; concentration camp survivors; and survivors of some religious cults. C-PTSD is distinct from, but similar to, PTSD; however, C-PTSD was not accepted by the American Psychiatric Association as a mental disorder in the DSM-5. It was first described in 1992 by Judith Herman in her book Trauma & Recovery and an accompanying article.

Six clusters of symptoms have been suggested for diagnosis of C-PTSD: (1) alterations in regulation of affect and impulses; (2) alterations in attention or consciousness; (3) alterations in self-perception; (4) alterations in relations with others; (5) somatization, and (6) alterations in systems of meaning. PTSD descriptions fail to capture some of the core characteristics of C-PTSD, such as captivity; psychological fragmentation; the loss of a sense of safety, trust, and self-worth; and the tendency to be revictimized. C-PTSD is also characterized by attachment disorder, particularly the pervasive insecure, or disorganized-type attachment—elements that are not adequately described by the diagnosis of PTSD.

Reactive attachment disorder is a childhood condition characterized by markedly disturbed ways of relating socially to others.

Reactive attachment disorder (RAD) is described in clinical literature as a severe and relatively uncommon disorder that can affect children. RAD is characterized by markedly disturbed and developmentally inappropriate ways of relating socially in most contexts. Previously in the DSM-IV-TR, RAD was divided into two different types: inhibited type took the form of a persistent failure to initiate or respond to most social interactions in a developmentally appropriate way, while disinhibited type presented itself as indiscriminate sociability, such as excessive familiarity with relative strangers. In the recent revisions to the DSM-5 (2013), however, RAD was narrowed to encompass only the symptoms of the inhibited form, and a new diagnosis of disinhibited social engagement disorder (DSED) was created to encompass the symptoms previously known as RAD-disinhibited type. Both RAD and DSED are categorized in the DSM-5 as types of trauma and stressor-related disorders.

Children with RAD are presumed to have grossly disturbed internal working models of relationships which may lead to interpersonal and behavioral difficulties in later life. There are few studies of long-term effects, and there is a lack of clarity about the presentation of the disorder beyond the age of five years. However, the opening of orphanages in Eastern Europe following the end of the Cold War in the early-1990s provided opportunities for research on infants and toddlers brought up in very deprived conditions. Such research broadened the understanding of the prevalence, causes, mechanism, and assessment of disorders of attachment and led to efforts from the late-1990s to develop treatment and prevention programs and better methods of assessment. Mainstream theorists in the field have proposed that a broader range of conditions arising from problems with attachment should be defined beyond current classifications. 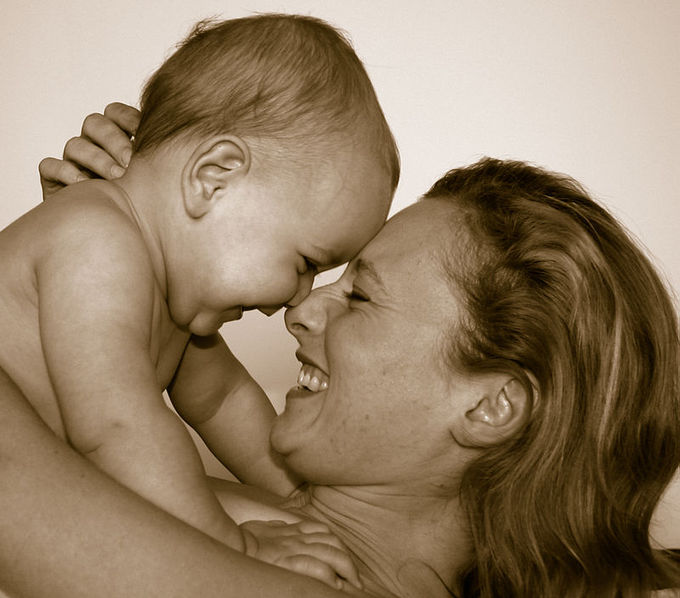 Pediatricians are often the first health professionals to assess and raise suspicions of RAD in children with the disorder. The initial presentation varies according to the child's developmental and chronological age, although it always involves a disturbance in social interaction. The core feature is severely inappropriate social relating by affected children. In order to be diagnosed with RAD under the DSM-5 criteria, a child under the age of 5 must:

While RAD is likely to occur in relation to neglectful and abusive treatment, automatic diagnoses on this basis alone cannot be made, as children can form stable attachments and social relationships despite marked abuse and neglect. In addition, the disturbance cannot be accounted for solely by developmental delay and does not meet the criteria for pervasive developmental disorder or autism spectrum disorder.

Although increasing numbers of childhood mental health problems are being attributed to genetics, reactive attachment disorder is by definition based on a problematic history of care and social relationships. RAD arises from a failure to form normal attachments to primary caregivers in early childhood. Such a failure could result from severe early experiences of neglect, abuse, abrupt separation from caregivers between the ages of six months and three years, frequent change of caregivers, or a lack of caregiver responsiveness to a child's communicative efforts. Not all, or even a majority, of such experiences result in the disorder.

It has been suggested that types of temperament, or constitutional response to the environment, may make some individuals susceptible to the stress of unpredictable or hostile relationships with caregivers in the early years. In the absence of available and responsive caregivers, it appears that some children are particularly vulnerable to developing attachment disorders. In discussing the neurobiological basis for attachment and trauma symptoms in a seven-year twin study, it has been suggested that the roots of various forms of psychopathology—including RAD, borderline personality disorder (BPD), and post-traumatic stress disorder (PTSD)—can be found in disturbances in affect regulation (i.e., the ability to regulate one's emotions).

Assessing the child's safety is an essential first step that determines whether future intervention can take place in the family unit or whether the child should be removed to a safe situation. Interventions may include psychosocial support services for the family unit (including financial or domestic aid, housing, and social work support), psychotherapeutic interventions (including treating parents for mental illness, family therapy, individual therapy), education (including training in basic parenting skills and child development), and monitoring of the child's safety within the family environment.

Mainstream treatment and prevention programs that target RAD and other problematic early attachment behaviors are based on attachment theory. These approaches concentrate on increasing the responsiveness and sensitivity of the caregiver—or if that is not possible, placing the child with a different caregiver. These approaches are mostly in the process of being evaluated.

08.04 TRAUMA- AND STRESSOR-RELATED, DISSOCIATIVE, AND SOMATIC SYMPTOM AND RELATED DISORDERS.pdf

PSYC 30093 •  Polytechnic University of the Philippines