There are a number of different ways, taking different factors into account, to measure fertility rate.

Total fertility rate (TFR) is the total number of children a woman would bear during her lifetime if she were to experience the prevailing age-specific fertility rates of women and survive until the end of her reproductive life. TFR equals the sum for all age groups of 5 times each ASFR rate. The TFR is a synthetic rate, not based on the fertility of any real group of women since this would involve waiting until they had completed childbearing. The TFR represents the average number of children a woman would have were she to fast-forward through all her childbearing years in a single year, under all the age-specific fertility rates for that year.

Total Fertility Rate: This map shows countries coded by total fertility rates, with 0-1 children at the bottom of the spectrum and 7-8 at the top. A number of factors, such as development index and religious tradition, contribute to variations in fertility rates.

The TFR (or TPFR—total period fertility rate) is a better index of fertility than the crude birth rate because it is independent of the age structure of the population, but it is a poorer estimate of actual completed family size than the total cohort fertility rate. In particular, the TFR does not necessarily predict how many children young women now will eventually have, as their fertility rates in years to come may change from those of older women now.

Net reproduction rate (NRR) starts with the GRR and adds the realistic assumption that some of the women will die before age 59; therefore they will not be alive to bear some of the potential babies that were counted in the GRR. NRR is always lower than GRR, but in countries where mortality is very low, almost all the baby girls grow up to be potential mothers, and the NRR is practically the same as GRR.

Human fertility depends on a long list of factors, including physical health and nutrition, sexual behavior, culture, instinct, endocrinology, timing, economics, way of life, and emotions. Fertility rates vary among countries and cultures because these factors vary. Demographers study the factors that affect fertility in order to better understand fertility patterns and their variance. Three of the major categories they study are physical health and nutrition, sexual behavior and human fertility, and political issues regarding childbirth and childrearing. 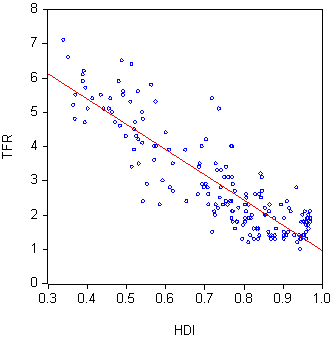 Fertility Rate and Human Development Index: Fertility has been found to correlate to human development index, with more developed countries having lower fertility rates than less developed ones.

The birth rate is an issue of concern for many governments and policymakers. Some, including those of Italy and Malaysia, seek to increase the national birth rate using pronatal measures such as financial incentives to new mothers. Conversely, other countries have policies to reduce the birth rate, such as China's former one-child policy.

In some places, government policies have been focused on reducing birth rates by improving women's sexual and reproductive health and rights. Typically, high birth rates have been associated with health impairments and low life expectancy, low living standards, low status of women, and low levels of education. There are claims that as countries go through economic development and social change, birth rate declines. Indeed, demographers consistently find that one of the strongest predictors of fertility rates is women's educational attainment. Almost universally, higher levels of educational attainment correspond to lower fertility rates.

Mortality rate measures the number of deaths in a population over a given period of time.

Explain the various ways mortality is calculated, such as the crude death rate, infant mortality rate and life expectancy


Mortality rate is a measure of the number of deaths (in general, or due to a specific cause) in a particular population, scaled to the size of that population, per unit of time. Mortality rate is typically expressed in units of deaths per 1,000 individuals per year; thus, a mortality rate of 9.5 (out of 1,000) in a population of 1,000 would mean 9.5 deaths per year in that entire population, or 0.95% out of the total. This measure is also called the crude death rate. As of July 2009 the crude death rate for the whole world is about 8.37 per 1000 per year according to the current CIA World Factbook.

Just as demographers measure fertility in different ways, they also measure mortality in various ways. Some of the more common demographic measures of mortality include the crude death rate (the annual number of deaths per 1000 people), the infant mortality rate, or the annual number of deaths of children less than 1 year old per thousand live births, and life expectancy, which measures the number of years that an individual at a given age can expect to live, given present mortality rates.

Sociologists have theorized that one of the best predictors of longevity, or a high life expectancy, is education, even when other factors are controlled, people with more education tend to live longer. A few additional years of schooling statistically corresponds to several additional years of life expectancy and vastly improved health in old age. The mechanism through which this works is not the schooling itself, but rather schooling's influence on other health-related behaviors. Education tends to lower the likelihood of smoking and engaging in unhealthy and high risk behaviors. Education also increases the probability of engaging in healthy behaviors, like exercise.

Crude Death Rate by Country: The crude death rate is a measure of how many people per 1000 members of a population die each year. It varies between countries based on various economic, social, and environmental factors.

Migration is the movement by people from one place to another.

Migration is the physical movement by people from one place to another; it may be over long distances, such as from one country to another, and can occur as individuals, family units, or large groups. When referring to international movement, migration is generally called immigration.

Lee's laws divide factors causing migrations into two groups of factors: push and pull factors. Push factors are things that are unfavorable about the area that an immigrant is coming from; pull factors are things that attract the immigrant to the new location.Historically, migration has been nomadic, meaning people sustained movement from place to place over their lifetimes. Although only a few nomadic people have retained this lifestyle in modern times, migration continues as both involuntary migration (such as the slave trade, human trafficking, and ethnic cleansing) and voluntary migration within a region, country, or beyond. Specific types of migrants can include colonizers (who forcefully enter into a country or territory), refugees (who are forced to flee their country), and temporary migrants (who travel to a new place temporarily, such as business travelers, tourists, or seasonal farm workers).

Along with fertility and mortality, migration is one of three major variables studied by demographers to measure population change.

Seasonal migration is generally associated with agriculture and tourism. Seasonal agricultural migrants follow crop cycles, moving from place to place to plant or harvest crops. Some countries, including the United States, allow special permits for seasonal agricultural workers to temporarily work in the country without granting full citizenship rights. Seasonal tourists seek out certain natural amenities, like snow-capped mountains for skiing and winter sports or desert sunshine for a break from oppressive winters.

Urbanization refers to migration from rural to urban areas. Since the 1970s, urbanization has become more common in developing countries, where industrialization has made agriculture more efficient and has increased the demand for urban labor. Previously, massive urbanization also took place in developed countries; beginning in Britain in the late eighteenth century, millions of agricultural workers left the countryside and moved to the cities.

In the United States, industrialization also led to considerable internal migration (or human migration within a nation) of African Americans from the rural South to the urban North. From 1910-1970, approximately seven million African Americans migrated north to escape both poor economic opportunities and considerable political and social prejudice in the South. They settled in the industrial cities of the Northeast, Midwest, and West, where relatively well-paid jobs were available. This phenomenon came to be known in the United States as the Great Migration.

In many developed countries, urbanization has slowed and the population has begun to move out of cities — in some cases back to rural areas, but most frequently, to newly-built suburbs. The movement from cities to surrounding suburbs is called suburbanization and represents yet another form of internal migration.

Yet another kind of migration, forced migration refers to the coerced movement of a person or persons away from their home or home region. It has been a means of social control under authoritarian regimes, taking the form of ethnic cleansing, slave trades, human trafficking, and forced displacement.

According to neoclassical economic theory, labor migration is motivated primarily by wage differences between two geographic locations. These differences can usually be explained by differences in the supply of and demand for labor. Areas with a shortage of labor but an excess of capital will have a high relative wage, whereas areas with a high labor supply and a dearth of capital will have a low relative wage. Following neoclassical principles, migrants tend to move from low-wage areas to high-wage areas where their labor is in higher demand.

The new economics of labor migration theory criticizes neoclassical economic theory for its narrow focus on individual decisions. According to the new economics theory, migration flows and patterns cannot be explained solely at the level of individual workers and their economic incentives. Instead, wider social entities must be considered as well. One such social entity is the household. Migrants may choose to move in order to reduce the social and economic risk that a household experiences as a result of having insufficient income. The household, in this case, needs extra capital, which can be attained by family members who participate in migrant labor abroad and send money back home as remittances. These remittances can also have a broader effect on the economy of the receiving country as a whole as they bring in capital.

World systems theory looks at migration from a global perspective.It explains that interaction between different societies can be an important factor in social change within societies. Trade with one country, which causes economic decline in another, may create incentives to migrate to a country with a more vibrant economy. It can be argued that even after decolonization, the economic dependence of former colonies still remains.

Net Migration Rates by Country: Social, economic, and environmental conditions (such as unemployment, drought, or conflict) can drive large numbers of people to migrate across national borders, as shown by this map. Positive migration rates are indicated in blue; negative migration rates in orange; stable in green; and no data in gray.

how do fertility and mortality affect the population.docx

CAFA 101 •  Polytechnic Univ of the Philippines

HISTORY US HISTORY U •  FLVS