The presidencies of Jefferson, Madison, and Monroe saw the rise of the Democratic-Republican Party and several domestic and international challenges.

Summerize the similarities and differences between the early British colonies

The Rise of the Democratic-Republicans

The election of 1800 marked the influential shift in power from the Federalists to the Democratic-Republicans, when Thomas Jefferson was elected president of the United States. The peaceful transition calmed contemporary fears about possible violent reactions to a new party’s taking the reins of government. The passing of political power from one political party to another without bloodshed also set an important precedent. 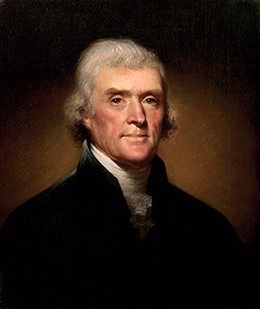 The slow decline of the Federalists, which began under Jefferson, led to a period of one-party rule in national politics. Historians call the years between 1815 and 1828 the “Era of Good Feelings” and highlight the “Virginia dynasty” of the time, because the two presidents who followed Jefferson—James Madison and James Monroe—both hailed from his home state. Like him, they owned slaves and represented the Democratic-Republican Party. Though Federalists continued to enjoy popularity, especially in the Northeast, their days of prominence in setting foreign and domestic policy had ended.

Over the course of Jefferson's two terms as president—he was reelected in 1804—Jefferson reversed the policies of the Federalist Party, promoted agriculture, and promoted his lasting vision of a rural empire consisting of land-owning white men. Jefferson championed the rights of states and insisted on limited federal government, limited taxes, and limited military. 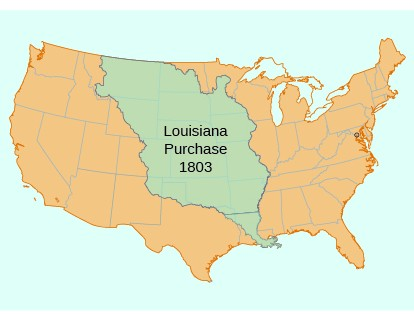 After 1800, the United States militantly expanded westward across North America, confident of its right and duty to gain control of the continent and spread the benefits of its “superior” culture. In 1803, President Jefferson authorized a "Corps of Discovery," headed by Meriwether Lewis and William Clark, to explore a passage to the Pacific Ocean. The Louisiana Purchase and the journey of Lewis and Clark captured the imagination of many who dedicated themselves to the economic exploitation of the western lands and the expansion of American influence and power. In the South, the Adams-Onís Treaty legally secured Florida for the United States, though it did nothing to end the resistance of the Seminoles against American expansionists. At the same time, the treaty frustrated those Americans who considered Texas a part of the Louisiana Purchase. Taking matters into their own hands, some American settlers tried to take Texas by force.

The United States faced many international challenges in the early nineteenth century under the presidencies of Jefferson, Madison, and Monroe. Despite his efforts to decrease the military, Jefferson responded to the capture of American ships and sailors by pirates off the coast of North Africa by leading the United States into war against the Muslim Barbary States in 1801, the first conflict fought by Americans overseas. Both the administrations of Jefferson and Madison undertook actions against the Barbary States at different times. Jefferson led the First Barbary War, from 1801 to 1805, against pirates' cities in what are today Libya, Tunisia, and Algeria. Madison directed forces for the Second Barbary War in 1815. Both ended in success for the United States.

Under Madison's presidency, the War of 1812, often called the "Second War of American Independence," culminated from unresolved issues between the United States and Great Britain. One major cause was the British practice of impressment, whereby American sailors were taken at sea and forced to fight on British warships; this issue was left unresolved by Jay’s Treaty in 1794. In addition, the British in Canada supported American Indians in their fight against further U.S. expansion in the Great Lakes region. Though Jefferson had wanted to avoid what he called “entangling alliances,” staying neutral proved impossible.

After 36 months of war, in December of 1814, British and U.S. diplomats met in northern Belgium to negotiate the Treaty of Ghent. The boundaries between the United States and British Canada remained as they were before the war, an outcome welcome to those in the United States who feared a rupture in the country’s otherwise steady expansion into the West. The American Indians in the Western Confederacy suffered a significant defeat, losing both their leader Tecumseh and their fight to retain their land in the Northwest. The War of 1812 proved to be of great importance in the United States because it generated a surge of national pride, asserted United States independence from Britain, and galvanized the nation's drive to invade lands further West.

The War of 1812 was very unpopular in New England, however, because it inflicted further economic harm on a region dependent on maritime commerce. This unpopularity caused a resurgence of the Federalist Party in New England. Many Federalists deeply resented the power of the slaveholding Virginians (Jefferson and then Madison), who appeared indifferent to their region. The depth of the Federalists’ discontent is illustrated by the proceedings of the December 1814 Hartford Convention, a meeting of 26 Federalists in Connecticut, where some attendees issued calls for New England to secede from the United States. These arguments for disunion during wartime, combined with the convention’s condemnation of the government, made Federalists appear unpatriotic. The convention forever discredited the Federalist Party and led to its downfall.

The Salem Witch Trials and the Great Awakening

1.2 The Court System and Trial Procedures.docx

Copy of Analyzing the Speech- Opening Remarks at the Scopes Trial 1925.pdf