Conclusion: Growth and Development of the Colonies

Conclusion: Growth and Development of the Colonies

The 17th and 18th centuries saw the unprecedented expansion of English power in North America, changing the landscape of the New World forever.

Summarize how the colonies developed over the 17th and 18th centuries

English Presence in the Americas

At the start of the 17th century, the English had not established a permanent settlement in the Americas. Over the next century, however, they outpaced their rivals. The English encouraged emigration far more than the Spanish, French, or Dutch. They established nearly a dozen colonies, sending swarms of immigrants to populate the land. England had experienced a dramatic rise in population in the 16th century, and the colonies appeared a welcoming place for those who faced overcrowding and grinding poverty at home.

Thousands of English migrants arrived in the Chesapeake Bay colonies of Virginia and Maryland to work in the tobacco fields. Another stream, this one of pious Puritan families, sought to live as they believed scripture demanded and established the Plymouth, Massachusetts Bay, New Haven, Connecticut, and Rhode Island colonies of New England.

After Roanoke Colony failed in 1587, the English found more success with the founding of Jamestown in 1607 and Plymouth in 1620. The two colonies were very different in origin. The Virginia Company of London founded Jamestown with the express purpose of making money for its investors, while Puritans founded Plymouth to practice their own brand of Protestantism without interference. Both colonies battled difficult circumstances, including conflict with neighboring American Indian tribes as they invaded into their land. Conflicts flared repeatedly in the Chesapeake Bay tobacco colonies and in New England, where a massive uprising against the English in 1675 to 1676—King Philip’s War—nearly succeeded in driving the English intruders back to the sea.

The 18th century witnessed the birth of Great Britain (after the union of England and Scotland in 1707) and the expansion of the British Empire. By the mid-1700s, Great Britain had developed into a commercial and military powerhouse; meanwhile, the population rose dramatically in Britain’s North American colonies. In the early 1700s, the population in the colonies had reached 250,000; by 1750, over a million British migrants and African slaves had established a near-continuous zone of settlement on the Atlantic coast from Maine to Georgia. By the mid-18th century, the 13 original New England, Middle, Chesapeake, and Southern colonies had all been established.

In addition to wresting control of New York and New Jersey from the Dutch, King Charles II of England established the Carolinas and Pennsylvania as proprietary colonies. Each of these colonies added immensely to the empire, supplying goods not produced in England, such as rice and indigo. These new colonies also contributed to the rise in population in English America as many thousands of Europeans made their way to the colonies. Their numbers were further augmented by the forced migration of African slaves.

As Europeans moved beyond exploration and into colonization of the Americas, they brought changes to virtually every aspect of the land and its people, from trade and hunting to warfare and personal property. European goods, ideas, and diseases shaped the changing continent.

As Europeans established their colonies, their societies also became segmented and divided along religious and racial lines. Most people in these societies were not free; they labored as indentured servants or slaves, doing the work required to produce wealth for others. By 1700, the American continent had become a place of stark contrasts between slavery and freedom and between the haves and the have-nots. 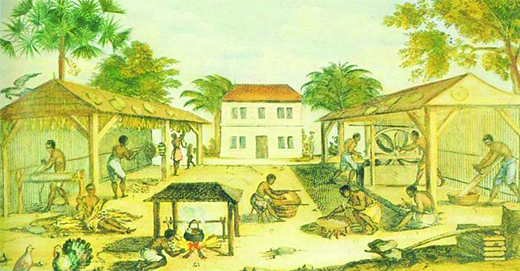 Slaves in the tobacco colonies: In this 1670 painting by an unknown artist, slaves work in tobacco-drying sheds.

The development of the Atlantic slave trade forever changed the course of European settlement in the Americas. Other transatlantic travelers, including diseases, goods, plants, animals, and even ideas like the concept of private land ownership, further influenced life in America during the 16th and 17th centuries. The exchange of pelts for European goods including copper kettles, knives, and guns played a significant role in changing the material cultures of American Indian peoples. During the 17th century, many American Indians tribes grew increasingly dependent on European trade items; at the same time, death from the introduction of European diseases was widespread and devastated their populations.

Role that religion played in the growth and development of colonial north America.docx

Influence of Workforce Education and Development on the Growth of.pdf

Growth and Development, are they equal And why 50.docx

The Determinants Of Growth And Development Of Kenya's Insurance Industry (1974-2004).pdf

Growth and Development, are they equal And why 16.docx

DETERMINANTS OF GROWTH AND DEVELOPMENT OF ISLAMIC FINANCE IN KENYA.docx

Petrakis (2020). Theoretical Approaches to Economic Growth and Development. An Interdisciplinary Per

ECONOMIA 02A •  National University of Callao

Implications of Studying of Child and Adolescent Growth and Development for Educators.pdf

ECONOMIA 02A •  National University of Callao

Growth and development of lease financing in india.pdf

Human growth and development is a vital process that many nurses find it important to consider.edite

GROWTH AND DEVELOPMENT OF EDUCATION IN INDIA(1757-1857).docx

Factors the Cause Growth and Development in the City of Lincoln.pdf

The Growth and Development of Administrative Law.pdf

Effects of Blue and Green Light on Plant Growth and Development a.pdf

european lifestyle in the colonies.pdf

Session 1- Growth and Development of the Purchasing Function - Copy.pdf

Contributions of Thomas Robert Malthus to the Growth and Development of Economic Science..docx