Conclusion: The Development of the Constitution

Conclusion: The Development of the Constitution

Drafting and ratifying the United States Constitution was a long and arduous process that shaped the future of the new nation. 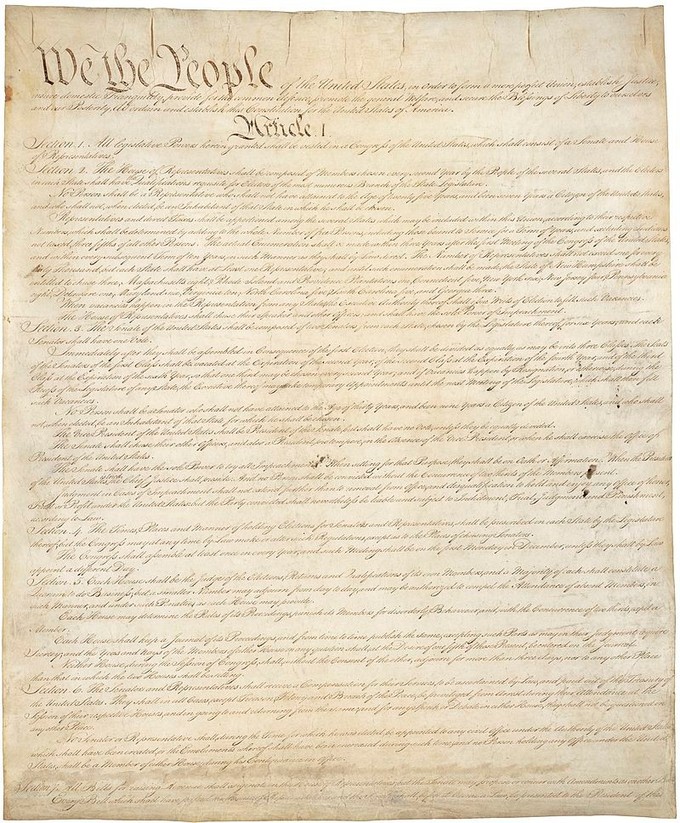 Debates and Compromises of the Constitution

One issue the Constitutional Convention delegates addressed was the way representatives in the new national government would be chosen. Would individual citizens be able to elect representatives? Would state legislatures choose representatives? How much representation was appropriate for each state?

The Virginia Plan proposed a legislative branch consisting of two chambers ( bicameral legislature ). Each state would be represented in proportion to its population. In contrast, the New Jersey Plan proposed a unicameral legislature in which each state, regardless of size, would have one vote. The Connecticut Compromise established a bicameral legislature, with the House of Representatives apportioned by population as desired by the Virginia Plan and the Senate granted equal votes per state as desired by the New Jersey Plan—combining the two plans in a workable whole.

The Three-Fifths Compromise was another agreement made between the Northern and Southern states related to representation of slaves for purposes of legislation and taxation. Under this compromise, each slave was counted as three-fifths of a person, allowing the slave states to include a portion of their enslaved population (or their “property”) when allocating representation. The free states found the compromise negligible when compared with the ultimate goal of writing a new governing document, and slave states were satisfied by this provision and agreed to support the plan.

Slavery was among the most controversial issues confronting the delegates at the Constitutional Convention. In addition to the issue of representation, states disagreed over whether the international slave trade, and slavery itself, should be prohibited. Because of the contentious nature, and because delegates did not want the Constitution's ratification to fail because of the conflict over slavery, the Convention postponed its decision on the slave trade. A special committee instead worked out another compromise: Congress would have the power to ban the importation of slaves, but not until at least 20 years had passed, in 1808. In exchange for this concession, the federal government's power to regulate foreign commerce would be strengthened by provisions that allowed for taxation of the slave trade in the international market.

Many of the Constitutional Convention delegates had serious reservations about democracy, which they believed promoted anarchy. To alleviate these fears, the Constitution blunted democratic tendencies that appeared to undermine the republic. Thus, to avoid giving the people too much direct power, the delegates ensured that senators were chosen by the state legislatures, not elected directly by the people (direct elections of senators came with the Seventeenth Amendment to the Constitution, ratified in 1913). As an additional safeguard, the delegates created the Electoral College, the mechanism for choosing the president. Under this plan, each state has a certain number of electors, which is its number of senators (two) plus its number of representatives in the House of Representatives. Critics, then as now, argue that this process prevents direct election of the President.

The Constitution established three separate branches of government, each of which would have defined powers to check and balance out the powers of the other branches. This idea of checks and balances arose from the fear many delegates held that one branch could become too strong and mirror a monarchy; something they had just fought against in the American Revolutionary War.  The legislative, executive, and judicial branches of government were resultantly created, and each kept distinct to prevent abuse of power.

The draft Constitution was finished in September 1787. The delegates decided that for the new national government to be implemented, each state must first hold a special ratifying convention. When nine of the 13 had approved the plan, the constitution would go into effect.

Opinions on the new Constitution were deeply divided, with two sides articulating contrasting visions of the American republic and of democracy. Supporters of the 1787 Constitution, known as Federalists, made the case that a centralized republic provided the best solution for the future. Those who opposed it, known as Anti-Federalists, argued that the Constitution would consolidate all power in a national government, robbing states of the power to make their own decisions. To Anti-Federalists, the Constitution appeared to mimic the old corrupt and centralized British regime, under which a distant government made the laws.

Ultimately, the Constitution only narrowly won approval in the nine necessary states. The opposition to the Constitution reflected the fears that a new national government, much like the British monarchy, created too much centralized power and resultantly deprived states' citizens of the ability to make their own decisions.

Anti-Federalists united in demanding protection for individual rights, and several states made the passing of a Bill of Rights a condition of their acceptance of the Constitution. Rhode Island and North Carolina rejected the Constitution because it did not already have this specific Bill of Rights.

Federalists followed through on their promise to add such a bill in 1789, when Virginia Representative James Madison introduced, and Congress approved, the Bill of Rights. Adopted in 1791, the bill consisted of the first 10 amendments to the Constitution and outlined many of the personal rights state constitutions already guaranteed.

Citizenry and Other Rights

After the Revolutionary War, the ideology that “all men are created equal” failed to match reality, as the revolutionary generation could not solve the contradictions of freedom and slavery in the new United States. While questions regarding the proper size and scope of the new national government created a divide among Americans and gave rise to political parties, a consensus existed among men on the issue of who did and did not qualify as a citizen. The 1790 Naturalization Act defined citizenship in stark racial terms. To be a citizen of the US republic, an immigrant had to be a “free white person” of “good character.” By excluding slaves, free blacks, Native Americans, and Asians from citizenship, the act laid the foundation for the United States as a republic of white men.

Development and Ratification of the US Constitution.pdf

US HISTORY us history •  Plato Academy

The Fundamentals of a Constitution.pdf

US HISTORY us history •  Plato Academy

Citizenship and the Constitution .docx

Citizenship and the Constitution Essay.docx

AoC vs Consitution, Online US History.docx

The Development of the American Economy Essay.docx

Development of the Constitution of 1875.pdf

Alternative Dispute Resolution, access to justice and development in Kenya.pdf

The Development Of Federalism In The United States.docx