Conclusion: The Legacy of the New Deal

Conclusion: The Legacy of the New Deal

The New Deal redefined the role of the government, convincing the majority of ordinary Americans that the government not only could but should intervene in the economy as well as protect and provide direct support for American citizens.

Evaluate the legacy of the New Deal

President Franklin D. Roosevelt came to office in 1933 amid the economic calamity of the Great Depression, offering the nation a New Deal intended to alleviate economic desperation and joblessness, provide greater opportunities, and restore prosperity. His presidency (1933–1945, the longest in U.S. history) was marked by an increased role that the federal government played in addressing the nation's economic and social problems. Work relief programs created jobs, ambitious public works projects promoted economic development, and a federal Social Security system was initiated. However, historians continue to debate the significance and legacy of the New Deal. William Leuchtenburg, a foremost historian of the era who is considered Roosevelt's "sympathetic critic," called the New Deal a "halfway revolution." He argued that the New Deal did not go far enough in its social or economic reforms because Roosevelt faced too much opposition and was too constrained by political factors to truly achieve a "full" revolution. Consequently, the New Deal was a series of short-term economic initiatives that lacked the long-term vision or planning that was necessary for truly revolutionary changes.

Other historians assess the legacy of the New Deal depending on their own political stand. Conservatives argued that the New Deal limited big business (and thus economic activities) and, in practice, meant socialism. New Left historians in the 1960s criticized Roosevelt and the New Deal for not attacking capitalism more vigorously and not helping African Americans achieve equality. They emphasized the absence of a philosophy of reform to explain the failure of New Dealers to attack fundamental social problems. They also detected a remoteness from the people and indifference to participatory democracy and emphasized conflict and exploitation during the era. Regardless of political views, however, historians generally agree that the United States battled the consequences of the Great Depression not thanks to the New Deal and its relief and reform programs, but thanks to the growth that resulted from the demands of World War II.

New Deal relief programs are generally regarded as a mixed success in ending the nation's economic problems on a macroeconomic level. Although fundamental economic indicators may have remained depressed, the programs were very popular among ordinary Americans. They improved the life of many citizens through providing jobs for the unemployed, legal protection for labor unions and some non-unionized industrial workers, modern utilities for rural America (e.g., electricity), living wages for the working poor, and price stability for farmers. However, the same programs disproportionately benefited white Americans and particularly white males. Economic progress for minorities, especially African Americans and many working class women, was hindered by discrimination, which the Roosevelt administration rarely battled and often endorsed.

One of the primary legacies of the New Deal was a change in the relationship between the government and the nation. The New Deal was built around the assumption that the government–both federal and state–not only could but should intervene in and regulate the economy and directly support those in need. While the idea emerged in Europe already in the 19th century and gained some traction in the United States during the Progressive Era, it was Roosevelt and his New Deal that applied it on such a massive scale.

A number of social assistance programs that exist in the United States today trace their legacy to the New Deal era, including old age pensions, unemployment insurance, farm subsidies, subsidized public housing, support for the disabled, or support for children in the poorest families. They are designed to subsidize the needs of the general population with various eligibility requirements. The Social Security system remains the largest and most prominent social aid program originally established by New Deal legislation. Similarly, measures protecting labor that are today a taken-for-granted aspect of American life are a result of the New Deal. While such developments as a ban on child labor, maximum working hours, and minimum wages had been discussed or even introduced to a limited extent on a state level during the Progressive Era, it was the New Deal legislation that included them in federal legislation.

Historians agree that the New Deal resulted in critical changes in the U.S. political landscape. Roosevelt's presidency redefined the role of the executive branch, giving much more substantial power to the president and the federal government. Through a large number of federal agencies and programs, the government regulated the economy, including for example, labor relations in some industries, and thus, multiple groups of citizens received legal protection and support. These ideas inspired the next generations of American reformers and paved the way for reform-minded presidents and their ideas, particularly those of President Lyndon B. Johnson and his Great Society agenda (inspired by Johnson's direct participation in the New Deal).

The New Deal also dramatically changed the two main political parties in the United States. Roosevelt's commitment to the improvement of the plight of the working class and the poor shifted political loyalties. Thanks to the New Deal legislation, the urban working class, including labor unions, became one of the most loyal supporters of the Democratic Party. Despite's Roosevelt's questionable record in respect to African Americans, even black voters, who until 1936 loyally supported Lincoln's Party, turned to the Democrats. What was known as the New Deal Coalition, turned the Democratic Party into a majority party, and shaped American politics until the 1960s, with some remnants of it existing into the 1980s. 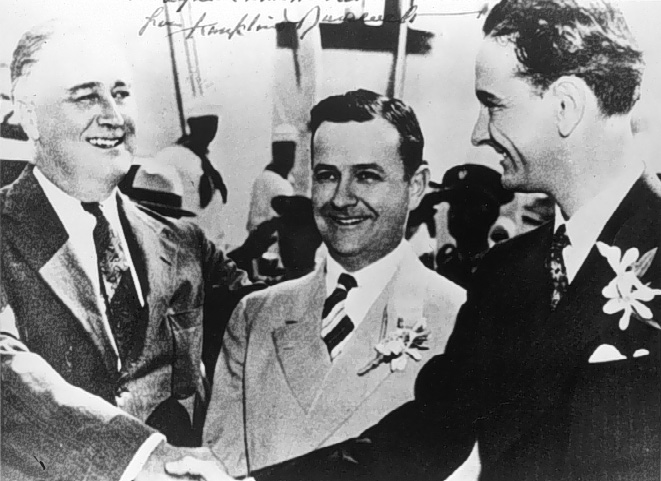 Franklin Delano Roosevelt shakes hands with young Lyndon B. Johnson, with Gov. James Allred of Texas in between. Galveston, Texas, May 12, 1937: In the 1960s, the New Deal would inspire President Lyndon B. Johnson's Great Society.

4: The Legacies of the New Deal

The legacy of the new deal peers.docx

The Legacy of the New Deal

Randy Moubarak - The Legacy of the New Deal.docx

Legacy of the New Deal.docx

Legacy of the New Deal

Legacy of the New Deal.docx

The Woman Behind the New Deal The Life and Legacy of Frances Perkins, Social Security, Unemployment

The Legacy of Childhood Trauma | The New Yorker.pdf

Abuse Cases, and a Legacy of Skepticism - The New York Times.pdf

An Evaluation of the New Deal_ Student.pdf

Copy of A New Deal for America Viewing Guide.pdf

History and Legacy of Racism in the US.docx

US HISTORY HUS21X •  The High School Of Fashion Industries