Conclusion: Truman and the Beginning of the Cold War

Conclusion: Truman and the Beginning of the Cold War

With President Truman adopting an explicit attitude of anti-Soviet policy with his Truman Plan, historic tensions between the United States and the Soviet Union erupted into what is known as the Cold War.

The Cold War was a state of political and military tension after World War II between powers in the Western Bloc (the United States, its NATO allies, and others) and powers in the Eastern Bloc (the Soviet Union and its satellite states ). Historians do not fully agree on the dates, but a common time frame is the period between 1947, the year the Truman Doctrine (a U.S. policy pledging to aid nations threatened by Soviet expansionism) was announced, and 1991, the year the Soviet Union collapsed.

Origins of the Cold War date to events preceding the Second World War and even the Russian Revolution of 1917, which led to pre-World War II tensions between the Soviet Union, western European countries, and the United States. A series of events during and after World War II exacerbated tensions, including the Soviet- German pact during the first two years of the war leading to subsequent invasions, the perceived delay of an amphibious invasion of German-occupied Europe, the western allies' support of the Atlantic Charter, disagreement in wartime conferences over the fate of Eastern Europe, the Soviets' creation of an Eastern Bloc of Soviet satellite states, western allies scrapping the Morgenthau Plan to support the rebuilding of German industry, and the Marshall Plan.

The first phase of the Cold War began in the first two years after the end of the Second World War in 1945. The USSR consolidated its control over the states of the Eastern Bloc, while the United States began a strategy of global containment to challenge Soviet power, extending military and financial aid to the countries of Western Europe (for example, supporting the anti-communist side in the Greek Civil War) and creating the NATO alliance. The Berlin Blockade (1948–49) was the first major crisis of the Cold War. With the victory of the communist side in the Chinese Civil War and the outbreak of the Korean War (1950–53), the conflict expanded. The USSR and U.S. competed for influence in Latin America and the decolonizing states of Africa and Asia. Meanwhile, the Hungarian Revolution of 1956 was stopped by the Soviets. The expansion and escalation sparked more crises, such as the Suez Crisis (1956), the Berlin Crisis of 1961, and the Cuban Missile Crisis of 1962.

President Truman and the Cold War

As a Wilsonian internationalist, President Harry S. Truman strongly supported the creation of the United Nations and included Eleanor Roosevelt on the delegation to the UN's first General Assembly. With the Soviet Union expanding its sphere of influence through Eastern Europe, Truman and his foreign policy advisors took a hard line against the USSR. In this, he matched American public opinion, which quickly came to view the Soviets as intent upon world domination.

Although he claimed no personal expertise on foreign matters, Truman won bipartisan support for both the Truman Doctrine, which formalized a policy of Soviet containment, and the Marshall Plan, which aimed to help rebuild postwar Europe. To get Congress to spend the vast sums necessary to restart the moribund European economy, Truman used an ideological argument, arguing that Communism flourishes in economically deprived areas.

Truman announced his "Truman Plan" to Congress on March 12, 1947, and further developed it on July 12, 1948, when he pledged to contain Soviet threats to Greece and Turkey. American military force was usually not involved, but Congress appropriated free gifts of financial aid to support the economies and the military of Greece and Turkey. More generally, the Truman Doctrine implied American support for other nations threatened by Soviet communism. This became the foundation of American foreign policy, and led to the 1949 formation of NATO, a military alliance that is still in effect. Historians often use Truman's speech to date the start of the Cold War.

The Truman Doctrine was informally extended to become the basis of American Cold War policy throughout Europe and around the world. It shifted American foreign policy toward the Soviet Union from détente (a relaxation of tension) to a containment of Soviet expansion as advocated by diplomat George Kennan. It was distinguished from rollback by implicitly tolerating the previous Soviet takeovers in Eastern Europe. 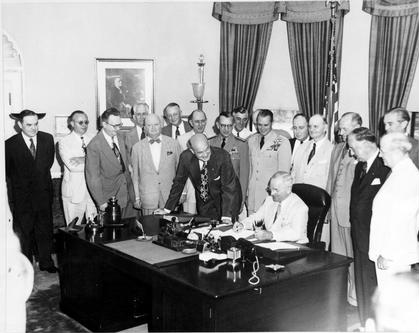 On June 24, 1948, the Soviet Union blocked access to the three Western-held sectors of Berlin. The Allies had never negotiated a deal to guarantee supply of the sectors deep within the Soviet-occupied zone. The commander of the American occupation zone in Germany, General Lucius D. Clay, proposed sending a large armored column across the Soviet zone to West Berlin with instructions to defend itself if it were stopped or attacked. Truman believed this would entail an unacceptable risk of war. He approved Ernest Bevin's plan to supply the blockaded city by air. On June 25, the Allies initiated the Berlin Airlift, a campaign that delivered food and other supplies, such as coal, using military aircraft on a massive scale. Nothing like it had ever been attempted before, and no single nation had the capability, either logistically or materially, to have accomplished it. The airlift worked; ground access was again granted on May 11, 1949. Nevertheless, the airlift continued for several months after that. The Berlin Airlift was one of Truman's great foreign policy successes; it significantly aided his election campaign in 1948. However, it increased tensions with the Soviet Union. 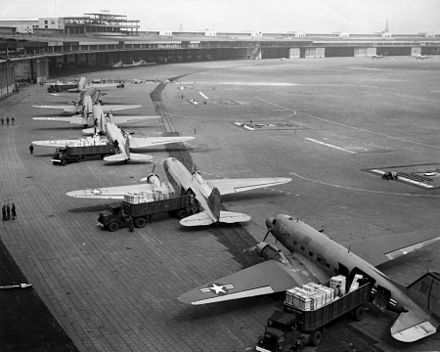 Berlin Airlift: C-47s unloading at Tempelhof Airport in Berlin during the Berlin Blockade.

One of the most significant impacts of containment was the outbreak of the Korean War. In June 1950, Kim Il-sung's North Korean People's Army invaded South Korea. Joseph Stalin "planned, prepared, and initiated" the invasion, creating "detailed [war] plans" that were communicated to the North Koreans. To Stalin's surprise, the UN Security Council backed the defense of South Korea, though the Soviets were then boycotting meetings in protest that Taiwan and not Communist China held a permanent seat on the Council. A UN force of personnel from South Korea, the United States, the United Kingdom, Turkey, Canada, Colombia, Australia, France, South Africa, the Philippines, the Netherlands, Belgium, New Zealand, and other countries joined to stop the invasion.

Among other effects, the Korean War galvanized NATO to develop a military structure. Public opinion in countries involved, such as Great Britain, was divided for and against the war. Many feared an escalation into a general war with Communist China or even nuclear war. The strong opposition to the war often strained Anglo-American relations. For these reasons, British officials sought a speedy end to the conflict, hoping to unite Korea under United Nations auspices and withdrawal of all foreign forces.

Even though the Chinese and North Koreans were exhausted by the war and prepared to end it by late 1952, Stalin insisted that they continue fighting, and the Armistice was approved only in July 1953 after Stalin's death.

Tensions between the Communist Soviet Union and the Capitalist United States date back as far as the Bolshevik Revolution in 1917 and developed throughout the first half the 20th century. Although the two nations were allies against Nazi Germany and the Axis powers during WWII, conflicting viewpoints about post-war reconstruction reignited the antagonism between the Soviets and Americans to a place where resolution seemed impossible. Europe became split between the Soviet "Eastern Bloc" and the "Western Bloc." With President Truman adopting an explicit attitude of anti-Soviet policy with his Truman Plan and the American government's choice to send supplies to East Berlin against the Soviet Blockade, these tensions erupted into what is known as the Cold War, "cold" because it never saw direct military conflict between the Soviet Union and American armies. However, because of the American policy of containment, the Cold War saw several "proxy wars," such as the Korean War and the Vietnam War.