Conclusion: WWII and the US

Conclusion: WWII and the U.S.

The post-World War II period in the United States witnessed unprecedented economic prosperity and important social developments, including critical shifts on the labor market, rise of mass consumerism, the "baby boom," and the rapid growth of civil rights movement.

Despite the massive destruction, most war-affected economies rapidly recovered in the aftermath of the World War, but no country enjoyed prosperity comparable to that of the United States. The middle class swelled, as did gross domestic product (GDP) and productivity. Between 1945 and 1960, gross national product (GNP) grew by 250%, expenditures on new construction multiplied nine times, and consumption on personal services increased three times. By 1960, per capita income was 35% higher than in 1945. As a result of the postwar economic boom, 60% of the American population had attained a "middle-class" standard of living by the mid-50s (defined as income of $3,000 to $10,000 in constant dollars), compared with only 31% in the last year of prosperity before the onset of the Great Depression. Between 1947 and 1960, the average real income for American workers increased by as much as it had in the previous half-century.

Technological developments greatly influenced changes in agriculture. Ammonia from plants built during World War II to make explosives became available for making fertilizers, leading to a permanent decline in real fertilizer prices. The early 1950s was the peak period for tractor sales in the U.S. as the few remaining horses and mules were phased out. The horsepower of farm machinery saw a large expansion. A successful cotton picking machine was introduced in 1949. Research on plant breeding produced varieties of grain crops that could produce high yields with heavy fertilizer input. This resulted in the Green revolution beginning in the 1940s.

Air transport was a major beneficiary of the war. The U.S. was the leading producer of combat aircraft during World War II and had a large surplus of machine tools and manufacturing facilities for airplanes at the end of the war, as well as experienced airplane manufacturing and maintenance personnel. Additionally, radar was developed during the war. The aircraft industry had the highest productivity growth of any major industry, growing by 8.9% per year from 1929-1966. Land transportation was also about to witness revolutionary changes as the construction of the Interstate Highway System began in 1956.

After the Cold War began in 1947 and especially after the Korean War began in 1950, military spending soared. President Eisenhower feared that excessive military spending would damage the economy, so he downsized the Army after Korea and shifted priorities to missiles and nuclear weapons (which were much less expensive than army divisions). He also promoted the Interstate Highway System as necessary for national defense and made space exploration a priority. His successor John F. Kennedy made a manned mission to the moon a national priority. Much of the new spending went to California and the West, a continuation of wartime spending. An even greater impact came in the South, where it stimulated a modernization of the economy away from cotton towards manufacturing and technology.

Wartime rationing was officially lifted in September 1945, but prosperity did not immediately return as the next three years would witness the difficult transition back to a peacetime economy. The 12 million returning veterans who needed work often could not find it. In addition, labor strikes rocked the nation, in some cases exacerbated by racial tensions. African-Americans who had jobs during the war were now faced with irate returning veterans who demanded that they step aside. The huge number of women employed during wartime were also rapidly cleared out to make room for their husbands.

After the initial hurdles of the 1945-48 period were overcome, many Americans found themselves flush with cash from wartime work because there was little to buy for several years. The result was a mass consumer spending spree, with a voracious demand for new homes, cars, and housewares. Increasing numbers enjoyed high wages, larger houses, better schools, more cars, and home comforts like vacuum cleaners and washing machines to save labor and make housework easier. Consumerism represented one of the consequences (as well as one of the key ingredients) of the postwar economic boom.

As economic prosperity empowered couples who had postponed marriage and parenthood, the birth rate started shooting up in 1941, paused in 1944-45 (with 12 million men in service), and then continued to soar until reaching a peak in the late 1950s (the post-war "baby boom"). As women were forced out of the labor market, many chafed at the social expectations of being an idle stay-at-home housewife who cooked, cleaned, shopped, and tended to children. In 1963, Betty Friedan published her book The Feminine Mystique which strongly criticized the role of women during the postwar years. This best-seller was a major catalyst of the women's liberation movement. 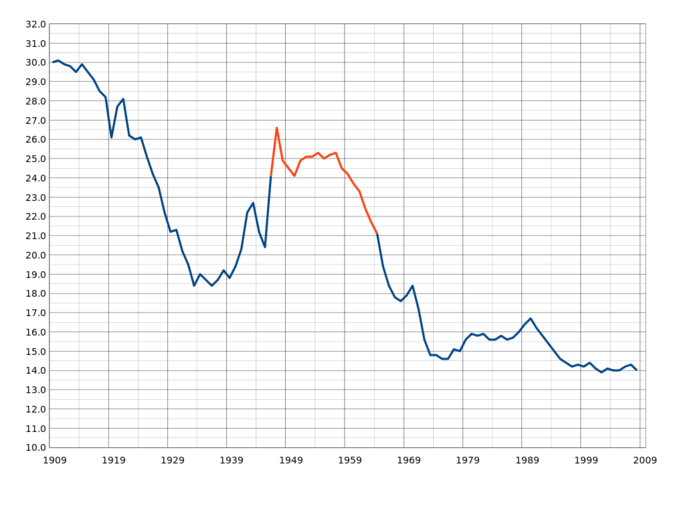 United States Baby Boom Birth Rate (per 1,000): As economic prosperity empowered couples who had postponed marriage and parenthood, the birth rate started shooting up in 1941, paused in 1944-45 (with 12 million men in service), and then continued to soar until reaching a peak in the late 1950s (the post-war "baby boom").

Voting rights discrimination remained widespread in the South through the 1950s. Fewer than 10% voted in the Deep South, although a larger proportion voted in the border states, and black Americans were organized into Democratic machines in the northern cities. Although both parties pledged progress in 1948, the only major development before 1954 was the integration of the military.

In the early days of the Civil Rights Movement, litigation and lobbying were the focus of integration efforts. The U.S. Supreme Court decisions in Brown v. Board of Education of Topeka (1954) and other critical cases led to a shift in tactics, and from 1955 to 1965, "direct action" was the strategy—primarily bus boycotts, sit-ins, freedom rides, and social movements. Brown v. Board of Education of Topeka was a landmark case of the United States Supreme Court that explicitly outlawed segregated public education facilities for black and white Americans, ruling on the grounds that the doctrine of "separate but equal" public education could never truly provide black Americans with facilities of the same standards available to white Americans. One hundred and one members of the United States House of Representatives and 19 senators signed "The Southern Manifesto" condemning the Supreme Court decision as unconstitutional. 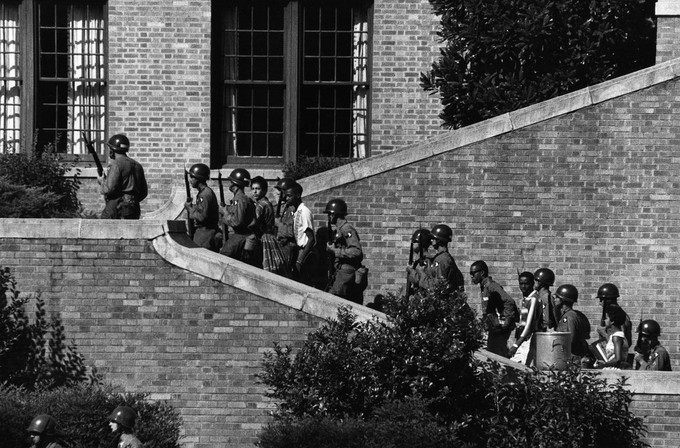 Soldiers from the 101st Airborne Division escort nine black students into the all-white Central High School in Little Rock, Arkansas, after the Supreme Court declared school segregation to be unconstitutional (1957).: The 1954 Brown v. Board of Education of Topeka was a landmark case of the United States Supreme Court, which explicitly outlawed segregated public education facilities for black and white Americans.