European Wars in the Colonies

Throughout the 17th and 18th centuries, the European powers fought many wars over control of the colonies in North America.

A Progression of Wars

Wars with Spain and the Netherlands

The Anglo-Dutch Wars (1652–1674) were a series of conflicts fought largely at sea over Britain's power to restrict trade to the colonies. Their impact on the colonies was mostly limited to their shifting ownership of New Netherland.

The War of Jenkins' Ear (1739–1748) began over Britain's supplying slaves and goods to the Spanish colonies in North America. The Spanish became suspicious that British ships were overreaching and began boarding and seizing British ships. The war gained its colorful name from a Spanish threat against British captain Robert Jenkins, whose ear was severed when his ship was boarded; he was told to show his ear to Parliament and tell the king that the Spanish would do the same to him. Its conflicts included a siege of St. Augustine in Florida by Georgian colonists and a counter-invasion of Georgia by Spanish forces. The war was largely subsumed by the War of the Austrian Succession in 1742.

Beginning in 1689, the British colonies became involved in a series of major wars between Britain and France for control of North America. Britain and France fought four wars that became known as the French and Indian Wars —followed in 1778 with another war when France joined the Americans in the American Revolution. The French settlers in New France were outnumbered nearly 15 to one by settlers in the 13 British colonies, so the French relied heavily on American Indian allies.

King William's War (1689–1697), also known as the "Nine Years War" and the "War of the League of Augsburg," was a phase in the larger Anglo-French conflict for colonial domination throughout the world. New France and the Wabanaki Confederacy thwarted New England expansion into Acadia by raiding settlements in present-day Maine, whose border New France defined as the Kennebec River in southern Maine. Toward this end, they executed raids against targets in Massachusetts Colony (including present-day Maine), starting with the Northeast Coast Campaign.

With his New England militia, Sir William Phips moved in 1690 to take the French strongholds at Port Royal and at Quebec. Having to reckon with Quebec's formidable natural defenses, its superior number of soldiers, and the coming of winter, Phips sailed back to Boston with his hungry, smallpox-ridden, and demoralized force. His failure showed a growing recognition of the need to replicate European combat techniques and war policy in order to achieve military success.

The Iroquois suffered heavily in King William's War and were brought, along with other western American Indians, into the French trading network. The British colonists' treatment of American Indian tribes led directly to the Wabanaki tribe's involvement in the war. Unlike tribes in southern New England, the Wabanaki retained significant power relative to the colonists and rejected the latter's attempts to exert authority over them. Expanding settlements fueled tensions and offered an opportunity to the French, who wanted to counter English influence in the region. New England's lack of stability and authority, the Wabanakis' existing grievances, and French encouragement led to Wabanaki attacks on settlements on the Northeast coast, a pattern that would be repeated until the withdrawal of the French in 1763.

Queen Anne's War (1702–1713) was the second war for control of the continent and was the counterpart of the War of the Spanish Succession in Europe. The conflict also involved a number of American Indian tribes as well as Spain, which was allied with France.

In 1702, Carolina governor James Moore led an unsuccessful attack on St. Augustine, the capital of Spanish Florida, as welll as one of several raiding expeditions that wiped out much of Florida's American Indian population in 1704–1706. Thomas Nairne, the Province of Carolina 's Indian agent, planned an expedition of British soldiers and their American Indian allies to destroy the French settlement at Mobile and the Spanish settlement at Pensacola. The expedition never materialized, but the British did supply their allies with firearms, which the Tallapoosas used in their siege of Pensacola. The English failed to compensate the Tallapoosas adequately, and by 1716, the Tallapoosas and other tribes had shifted allegiance and were prepared to strike against South Carolina settlements.

Meanwhile, French privateers inflicted serious losses on New England's fishing and shipping industries. The privateering was finally curbed in 1710 when, under the command of Francis Nicholson, Britain provided military support to American colonists, resulting in the British Conquest of Acadia (which later became peninsular Nova Scotia), the main base used by the privateers.

The war ended in 1713, and by the Treaty of Utrecht, Britain gained Acadia, the island of Newfoundland, the Hudson Bay region, and the Caribbean island of St. Kitts. France was required to recognize British authority over the Iroquois. Following Queen Anne's War, relations between Carolina and the nearby American Indian populations deteriorated, resulting in the Yamasee War of 1715 and Father Rale's War a few years later, which very nearly destroyed the province. 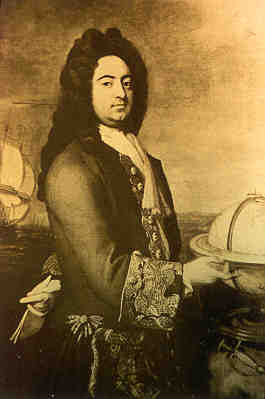 King George's War, 1744–1748, was the North American phase of the concurrent War of the Austrian Succession. In 1745, naval and ground forces from Massachusetts in the Siege of Louisbourg captured the strategic French base on Cape Breton Island. During the war, the French made four attempts to regain Acadia by capturing the capital, Annapolis Royal. The French led American Indian allies in numerous raids, such as the destruction of the village of Saratoga, New York, killing and capturing more than 100 of its inhabitants. The war merged into the War of Jenkins' Ear against Spain and ended with the Treaty of Aix-la-Chapelle in 1748, under which the French regained Fortress Louisbourg.

The French and Indian War

The final imperial war, the French and Indian War (1754–1763), known as the Seven Years’ War in Europe, proved to be the decisive contest between Britain and France in America. The war began over competing land claims between Britain and France in what is now western Pennsylvania. The war continued until 1763, when the French signed the Treaty of Paris and essentially forfeited the land of New France, ending their power on the continent. The British Empire had now gained mastery over North America and become a truly global empire. This last of the wars for empire, however, also sowed the seeds of trouble. The war led Great Britain deeply into debt, and in the 1760s and 1770s, efforts to deal with the debt through imperial reforms would have the unintended consequence of causing stress and strain that threatened to tear the Empire apart. 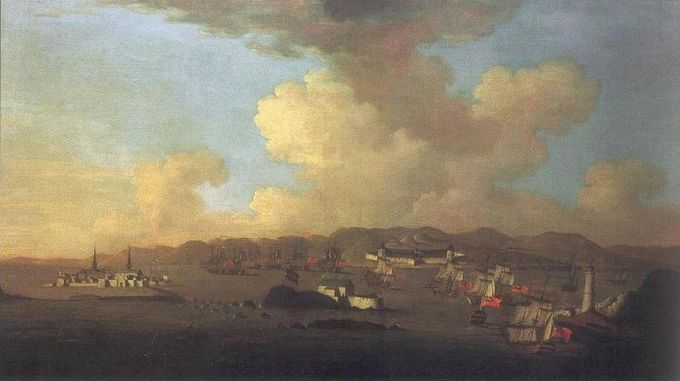 The Capture of Louisburg, 1745 by Peter Monamy: In the attack on Louisbourg in 1745, naval and ground forces from Massachusetts captured the strategic French base on Cape Breton Island.

The invasion of North America by European powers had widespread effects on American Indian life.


From the 16th through the 19th centuries, the population of American Indians drastically declined due to epidemic diseases brought from Europe, genocide and warfare at the hands of Europeans, displacement from their lands, internal warfare, enslavement, and a high rate of intermarriage. After 1492, European exploration and colonization of the Americas revolutionized how the Old and New Worlds perceived themselves. With the meeting of the two worlds, animals, insects, plants, cultures, and diseases were carried from one to the other, both deliberately and by chance, in what is called the Columbian Exchange.

Conversion in the New World

The European colonists in North America often rationalized their expansion of their empire with the assumption that they were saving–as they perceived–a barbaric, pagan world by spreading Christian civilization. In the Spanish colonization of the Americas, the policy of Indian Reductions resulted in the forced conversions to Catholicism of the indigenous people. What developed during the colonial years and since, has been a syncretic Catholicism that absorbed and reflected indigenous beliefs.

The Spread of Diseases

In 1618–1619, smallpox killed 90% of the American Indians in the area of the Massachusetts Bay. Historians believe many Mohawk in present-day New York became infected after contact with children of Dutch traders in Albany in 1634. The disease swept through Mohawk villages, reaching the Onondaga at Lake Ontario by 1636, and the lands of the western Iroquois by 1679, as it was carried by Mohawk and other tribes who traveled the trading routes. The high rate of fatalities caused breakdowns in American Indian societies and disrupted generational exchanges of culture.

Smallpox epidemics in 1780–1782, and 1837–1838, brought devastation and drastic depopulation among the Plains Indians. By 1832, the federal government established a smallpox vaccination program for American Indians, known as the Indian Vaccination Act. It was the first federal program created to address a health issue among American Indians.

Sheep, pigs, horses, and cattle were all Old World animals that were introduced to contemporary American Indians. In the 16th century, Spaniards and other Europeans brought horses to the Americas. The early American horse had been game for the earliest humans on the continent; it was hunted to extinction about 7000 BCE, just after the end of the last glacial period. The reintroduction of the horse to North America had a profound impact on the American Indian culture of the Great Plains. The tribes trained and used horses to ride, carry goods for exchange with neighboring tribes, hunt game, and conduct wars and raids. The people fully incorporated the use of horses into their societies and expanded their territories.

When Europeans arrived as colonists in North America, many American Indian tribes began selling war captives to Europeans rather than integrating them into their own societies as they had done before. As the demand for labor in the West Indies grew with the cultivation of sugar cane, Europeans enslaved American Indians in the 13 North American colonies, and some were exported to the "sugar islands." The British settler-invaders, especially those in the southern colonies, purchased or captured American Indians to use as forced labor in cultivating tobacco, rice, and indigo. Accurate records of the numbers enslaved do not exist; scholars estimate tens of thousands of American Indians may have been enslaved by the Europeans.

The slave trade of American Indians lasted only until around 1730 and gave rise to a series of devastating wars among the tribes, including the Yamasee War. The Indian Wars of the early 18th century, combined with the increasing importation of African slaves, effectively ended the American Indian slave trade by 1750. Colonists found that American Indian slaves could easily escape, as they knew the country. The wars cost the lives of numerous colonial slave traders and disrupted their early societies. The remaining American Indian groups banded together to face the Europeans from a position of strength. 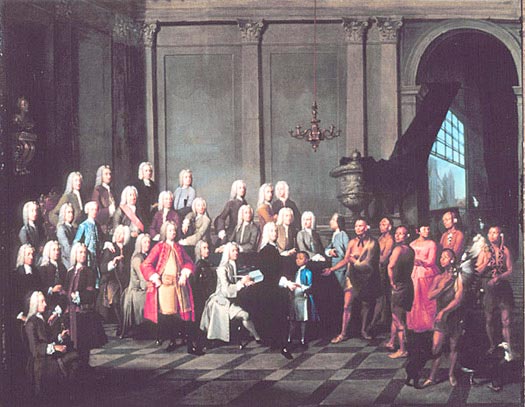 James Oglethorpe presenting the Yamacraw Indians to the Georgia Trustees: Yamacraw Creek Native Americans meet with the trustee of the colony of Georgia in England, in July 1734. The painting shows a Native American boy (in a blue coat) and woman (in a red dress) in European clothing.

In the 1790s, Benjamin Hawkins was assigned as the U.S. agent to the southeastern tribes that became known as the Five Civilized Tribes, for their adoption of numerous Anglo-European practices. Hawkins advised the tribes to take up slaveholding to aid them in European-style farming and plantations. He thought their traditional form of slavery, which had looser conditions, was less efficient than chattel slavery. In the 19th century, some members of these tribes began to purchase African American slaves.

HIST 40A •  University of California, Irvine

A conflict the medieval Europeans faced was during the Middle Ages the weather was cold.docx