Influenced by restrictive laws and brutal treatment, slaves combined African and Christian customs to form a culture of survival and resistance.

Slave culture in colonial North America was largely a combination of tribal African culture, Christian worship, and resistance. In many respects, American slave culture was a culture of survival and defiance against the American slave system. In the absence of a successful slave revolution, as in Haiti (although there were some abortive attempts by black slaves to violently claim their freedom), American slaves practiced other forms of resistance. Running away, suicide, slow paces of work, deliberate sabotage of plantation equipment or crops, and poisoning of slave masters were the most common manifestations of African slave resistance. In all of these instances, slave culture enabled a significant amount of resistance to the plantation economy and created a relatively cohesive slave identity that shaped southern life and relationships between slaves and whites in the colonial era.

Although the treatment of slaves varied depending on the plantation, more often than not it was characterized by brutality. Whippings, executions, beatings, and rapes were commonly suffered by slaves. Some slaves were treated differently according to their value or skill sets; for example, artisans, medical practitioners, skilled laborers, or technical experts were usually given preferential treatment and more liberties than field hands. In most states, slaves were forbidden to read or write. Sexual abuse of female slaves was endemic in the colonies, where cultural patriarchy treated all women (black and white) as property or chattel. Sexual relations with enslaved women resulted in a high increase of mixed-raced children born into slavery. 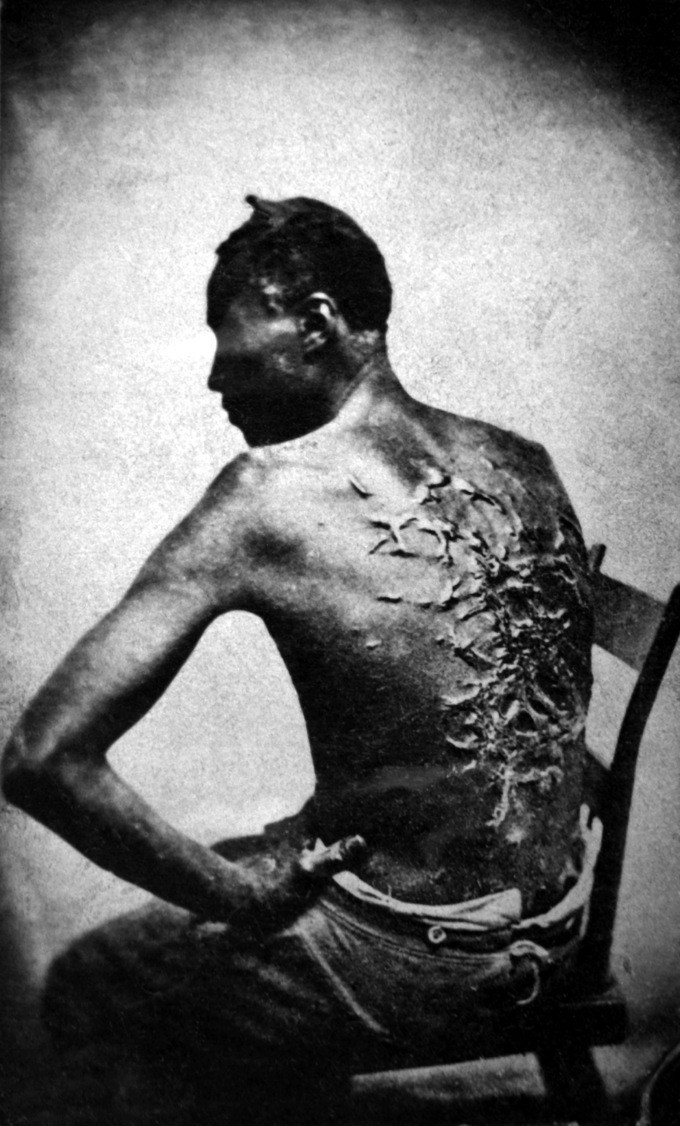 Abuses of slavery: Slaves commonly suffered horrid abuses from their masters, as depicted by the scars on the back of this former slave named Peter.

To regulate the relationship between slave and owner, including legal support for keeping slaves as property, state legislatures adopted various slave codes to reinforce white legal sanctions over the enslaved black population. While each state had its own slave code, they shared many similarities. Such laws commonly forbade slaves to learn to read or write or to associate with free Africans, and free blacks were forbidden from voting or holding public office. Some states denied slaves the right to carry firearms, drink liquor, or leave the plantation without their master's written consent.

Slaves strove to adapt to their new lives by forming new communities among themselves, often adhering to traditional African customs and healing techniques. Slave culture stressed the primacy of family and cooperation; indeed, the development of families and communities formed the most important response to the trauma of being enslaved.

Because slaves were proscribed from reading or writing, American slaves adopted a strong oral tradition—passing down songs, prayers, laments, and stories through music and storytelling. Oral tradition was a strong feature of many African tribal customs and allowed many African American slaves to feel a sense of cultural connection with the continent of their origins. African-based oral traditions became the primary means of preserving slave history, mores, and cultural information, and this was consistent with the practices of oral history in African cultures. Music, folktales, and storytelling provided an opportunity for the enslaved to educate each other in the absence of literacy, and songs and enthusiastic public worship were often used as a way of channeling and coping with hardships and voicing grievances to others in the slave community.

Slaves also drew on other aspects of tribal African culture, such as herbal medicine and prayer. Many slaves were renowned for their medical skills; often, whites would enlist the expertise of slave midwives or nurses over white doctors for remedies and cures for various ailments. Knowledge of herbal medicine could also be used as a form of resistance for poisoning slave masters and killing prized livestock.

When slaves were brought to American plantations, they were slowly stripped of their African religions and converted to Christianity. However, many African cultural elements were incorporated into slave prayer patterns, such as shouting, dancing, and enthusiastic singing using African rhythms. Many of these cultural styles and patterns still characterize worship in African American churches today.

Many slaves cultivated private gardens that were granted to them by their masters. These "kitchen gardens" were used to produce a slave family's yearly supply of food. Some slaves were able to sell a surplus of these crops at Sunday markets for a cash profit. Many white masters allowed the "kitchen garden economy" to thrive, letting some slaves leave the plantation on Sundays to sell their wares. Some slaves managed to purchase their own freedom through their kitchen gardens, saving their earnings for years to allow themselves and their children to achieve manumission.

Many slaves dealt with the trauma of their situation by actively resisting their condition, whether by defying their masters or running away. Runaway slaves formed what were called “maroon” communities—groups that successfully resisted recapture and formed their own autonomous groups. The most prominent of these communities lived in the interior of Jamaica, controlling the area and keeping the British away. Slaves who ran away were often fed and sheltered by slaves on neighboring plantations, which enabled them to evade their masters. Literate slaves taught illiterates how to read and write, despite state laws that forbid slaves from literacy. In these respects, slave communities were formed that stretched across plantations and slaves developed a culture of cooperation and opposition to coercive white rule.

Slaves resisted oppression in several ways ranging from rebellions and uprisings to sabotage, running away, and destruction of plantation property.

African slaves resisted enslavement and the southern plantation economy in a variety of ways, ranging from violent rebellion to sabotage, infanticide, suicide, running away, and the deliberate destruction of plantation property. Although African slaves never successfully revolted and overturned the institution of slavery like their counterparts in Haiti, there was a near-constant undercurrent of resistance to enslavement in the American colonies. While most slave uprisings were unsuccessful and historical evidence remains scarce about the overall aims and intentions of slave rebel leaders, they effectively intensified public debate over the American institution of slavery.

The institution of slavery created a false sense of superiority in whites, while simultaneously fueling fears of slave revolt. White responses to such revolts, or even the threat of them, led to gross overreactions and further constraints on slaves’ activities.

One notable uprising that became known as the Stono Rebellion took place in South Carolina in September of 1739. A literate slave named Jemmy led a large group of slaves in an armed insurrection against white colonists, killing several before militia stopped them. The militia suppressed the rebellion after a battle in which both slaves and militiamen were killed, and the remaining slaves were executed or sold to the West Indies.

Jemmy is believed to have been taken from the Kingdom of Kongo, an area where the Portuguese had introduced Catholicism. Other slaves in South Carolina may have had a similar background: Africa-born and familiar with whites. If so, this common background may have made it easier for Jemmy to communicate with the other slaves, enabling them to work together to resist their enslavement even though slaveholders labored to keep slaves from forging such communities.

In the wake of the Stono Rebellion, South Carolina passed a new slave code in 1740 called An Act for the Better Ordering and Governing of Negroes and Other Slaves in the Province—also known as the Negro Act of 1740. This law imposed new limits on slaves’ behavior, prohibiting slaves from assembling, growing their own food, learning to write, and traveling freely.

The New York Conspiracy Trials of 1741

Eighteenth-century New York City contained many different ethnic groups, and conflicts among them created strain. In addition, one in five New Yorkers was a slave, and tensions ran high between slaves and the free population, especially in the aftermath of the Stono Rebellion. These tensions burst forth in 1741.

That year, 13 fires broke out in the city, one of which reduced the colony’s Fort George to ashes. Ever fearful of an uprising among enslaved New Yorkers, the city’s whites spread rumors that the fires were part of a massive slave revolt in which slaves would murder whites, burn the city, and take over the colony. The Stono Rebellion was only a few years in the past, and throughout British America, fears of similar incidents were still fresh. Searching for solutions and convinced slaves were the principal danger, nervous British authorities interrogated almost 200 slaves and accused them of conspiracy. Rumors that Roman Catholics had joined the suspected conspiracy and planned to murder Protestant inhabitants of the city only added to the general hysteria. Very quickly, 200 people were arrested, including a large number of the city’s slave population.

After a quick series of trials at City Hall, known as the New York Conspiracy Trials of 1741, the government executed 17 New Yorkers. Thirteen black men were publicly burned at the stake, while the others (including four whites) were hanged. Seventy slaves were sold to the West Indies. Little evidence exists to prove that an elaborate conspiracy, like the one white New Yorkers imagined, actually existed. The events of 1741 in New York City illustrate the racial divide in British America, where panic among whites spurred great violence against and repression of the feared slave population. In the end, the Conspiracy Trials furthered white dominance and power over enslaved New Yorkers. 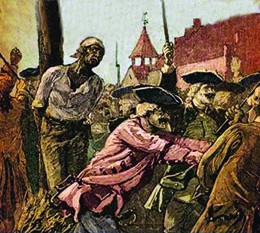 The New York Conspiracy Trials of 1741: In the wake of a series of fires throughout New York City, rumors of a slave revolt led authorities to convict and execute 30 people, including 13 black men who were publicly burned at the stake.