The Election of 1800 and the Federalist Legacy

The presidential election of 1800 represented the first peaceful transfer of power between political parties in U.S. history.

Describe the presidential election of 1800

Background to the 1800 Election

In the presidential election of 1800, incumbent President John Adams and his fellow Federalist candidate, Charles Cotesworth Pinckney, challenged the Republican duo of incumbent Vice President Thomas Jefferson and Aaron Burr. President Adams faced reelection in the face of crisis abroad, unpopularity at home, and a divided Federalist Party. Vice President Jefferson led a newly galvanized Democratic-Republican Party that was outraged over what it saw as Federalist abuses and enlargements of executive authority, especially in the form of the Alien and Sedition Acts.

While Democratic-Republicans were firmly aligned behind Jefferson and Burr, the Federalists began to fracture. A faction of so-called "High Federalists" emerged under Alexander Hamilton, who strongly opposed Adams' reelection. Hamilton, in an attempt to sabotage Adams in favor of electing the vice-presidential candidate Charles Pinckney, wrote a scathing 54 page criticism of Adams that accidentally became public when it landed in the hands of the Democratic-Republicans. Rather than marshal support for Pinckney, Hamilton's criticism embarrassed Adams and the Federalist party, exposing their internal divisions to the public.

Because each state could choose its own election day, voting lasted from April until October. In the end, Jefferson won a narrow victory over Adams (73 to 65 electoral votes) with New York casting the decisive vote. Many factors led to the defeat of the Federalists, including better organization by the Democratic-Republicans, internal fighting between Adams and Hamilton supporters, and the controversy of the Alien and Sedition Acts. Other decisive factors in the Jefferson victory were Jefferson's popularity in the South and the effective campaigning of Aaron Burr in New York State, where the legislature (which selected the Electoral College) shifted from Federalist to Democratic-Republican and cast the deciding vote. Jefferson swept the South, helped along by the Three-Fifths Clause of the Constitution, which counted slaves as three-fifths of a person for purposes of assigning electoral votes and gave additional power to the slave states. Jefferson also had strong support in the free states; only New England solidly supported Adams. 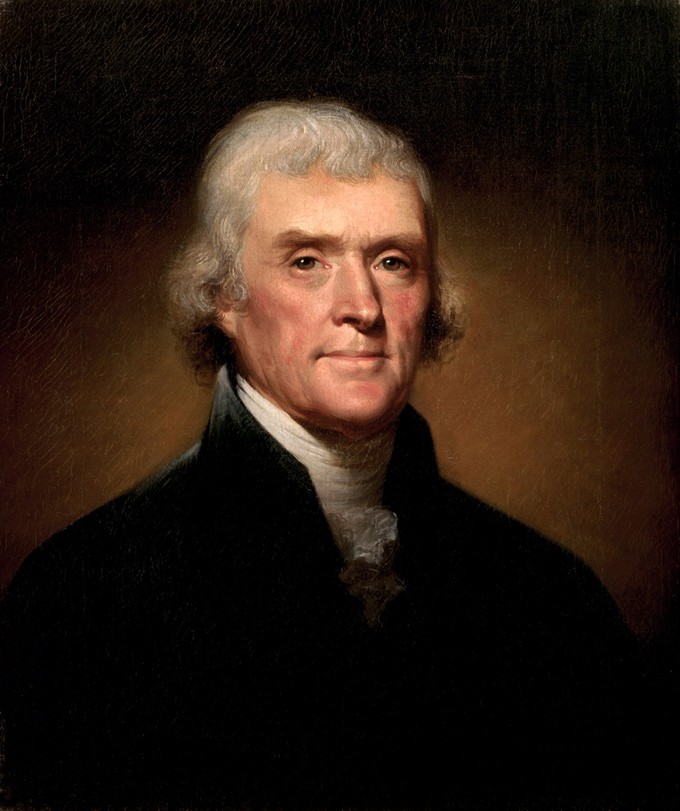 An unexpected glitch occurred, however, that led to a tie between Jefferson and Burr. Because the framers of the Constitution did not foresee the rise of political parties, the Constitution of 1787 stipulated that the vice president would simply be the person who received the second-most electoral votes. So in order for Jefferson to be elected president and for Burr to be elected vice president, one of the Democratic-Republican electors in the Electoral College would have to abstain. The Democratic-Republicans, however, neglected to have one of their electors abstain from voting for Burr, creating a tie between Jefferson and Burr that threw the election into the Federalist-dominated House of Representatives as dictated by the Constitution.

In order to spite the Democratic-Republicans, a number of congressional Federalists kept Burr's chances alive. It was only after dozens of ballots that Federalist Alexander Hamilton finally threw his support to Jefferson—viewing Burr as unsteady, unscrupulous, and the lesser evil of the two—and Jefferson was officially elected president. Hamilton's personal attacks on Burr's character would eventually lead to their duel and Hamilton's subsequent death.

In his inaugural address, Jefferson sought to cool partisan tempers, proclaiming that, "we are all Federalists, we are all Republicans." This was the first peaceful transfer of political power in the history of the republic, and Democratic-Republicans hailed Jefferson's victory as the "Revolution of 1800." The transfer of power from the Federalists to the Democratic-Republicans in a peaceful manner was the most significant and surprising outcome of the election and was singled out as a break from European precedent of violent and bloody power transfers.

In part, the peaceful transfer of power was due to the fact that the regime change did not necessarily signal a complete overhaul of Federalist policies. Despite the partisan polarization that occurred in the election of 1800, Jefferson's early presidency embodied both Federalist and Democratic-Republican policies that facilitated a stable transition of power during an otherwise volatile political period.

In response to the chaos of the election, the Twelfth Amendment to the Constitution was adopted in 1804, calling for a "party ticket" consisting of one presidential and one vice presidential candidate. This amendment stipulated that the president and vice president would be elected on separate ballots of the Electoral College, preventing ties in the future.

The twelve years of Federalism left a long-lasting and important legacy. The assumption of state debts by the federal government, the enactment of protective tariffs to protect domestic manufactures, and the successful suppression of the Whiskey Rebellion in western Pennsylvania proved the strength of the new federal government. Abroad, Washington and then Adams managed to avoid (barely) becoming embroiled in the war raging between Great Britain and Revolutionary France while increasing the country's naval strength. Overall, the Federalists established that the new constitutional regime was vigorous and capable.

The Birth of Political Parties

During the early years of the U.S. government, the new republic saw the firm and unexpected establishment of a two-party political system.

Differentiate between factional splits and political parties in the early republic

The founders of the Constitution did not foresee the development of political parties. For many, political parties were associated with the corruption and authoritarianism of the British Parliament. It was nearly universally believed that the new republic ought to be free from " factions." While the founders envisioned a competition in the new government among competing interests, few foresaw these interests uniting into formal political parties. However, the stresses the new government faced soon exposed different ideas about the direction of the new federal republic.

The first two political parties grew out of the early factions that had formed around the debate over ratification of the Constitutions. The Federalist party, which had grown out of the Federalist faction supporting ratification, favored a powerful central government and an economy based on commerce and manufacturing. The Democratic-Republicans, who arose out of the Anti-Federalist faction opposing ratification, favored a less-powerful central government and an economy that was built around farming and the trades.

The differences exposed during the fight over ratification became even more prominent during President Washington's administration. The Federalists tended to focus on the financial programs of Secretary of the Treasury Alexander Hamilton, while Democratic-Republican Secretary of State Thomas Jefferson led those who had been prominent in the Anti-Federalist cause. The differences between these two parties were deep, lasting, and of great consequence.

Partisan rancor in the first decades of the republic can perhaps be partially explained by the dramatic regional, economic, ideological, and cultural differences between the two political parties. Each pursued visions of a future United States that tended to exclude each other. The Federalists were an urban and commercial party that maintained that the Constitution ought to be loosely interpreted and a powerful central government established. Federalism was concentrated in the bustling maritime towns and cities of New England and in the plantation districts of the Chesapeake Bay and South Carolina. Its members generally came from the upper-middle and upper classes, who opposed political democracy.

In contrast, the Democratic-Republicans were a rural, agrarian party. They agreed that the Constitution ought to be strictly interpreted, fearing that a powerful central government would merely aid those who were already wealthy and influential. Their greatest strength was in farming districts throughout the country and among the working classes of the burgeoning cities. Unlike the Federalists, the Democratic-Republicans were confirmed supporters of political democracy.

The country also was driven by the global conflict between Great Britain and Revolutionary France during the 1790s. Federalists tended toward supporting Britain, while Democratic-Republicans favored France. Conflict between the two parties heightened with the passage by Federalists of the Alien and Sedition Acts in 1798, which sought to curtail speech against the Federalist government. After the passage of the Alien and Sedition Acts, Adams and the Federalists grew increasingly unpopular.

The election of Thomas Jefferson in 1800 marked a success for the Democratic-Republican party and the decline of the Federalist party. The political fate of the Federalist party was then sealed by the seemingly treasonable behavior of leading Federalists during the War of 1812. After the war, for a brief period, partisan differences seemed to disappear. The disintegration of the Federalist party seemed to leave only the Democratic-Republican party standing. This so-called "Era of Good Feelings" during Monroe's administration made many wonder if the founders were right to discount parties. However, after Monroe left office, new partisan differences flared up, instituting the Second Party System. 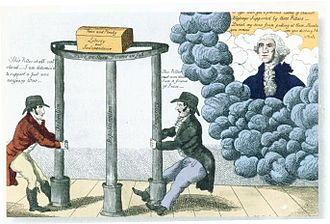 1800 Federalist poster: At the left a Democrat says, "This Pillar shall not stand I am determin'd to support a just and necessary War” and at the right a Federalists claims, "This Pillar must come down I am a friend of Peace." Washington (in heaven) warns party men to let all three pillars of Federalism, Republicanism, and Democracy stand to hold up Peace and Plenty, Liberty and Independence.

The Election of 1800 and its Revolutionary Consequences.docx

Do you agree with Jefferson that the election of 1800 was a revolution history w4.docx

The Election of 1800_ Mastery Test.pdf

Gabriel's Conspiracy and the Election of 1800 Questions copy.docx

Do you agree with Jefferson that the election of 1800 was a revolution Explain your answer.

To what extent was the election of 1800 aptly named the.docx

the election of 1800 and the arrival of Jeffersonian Democracy.doc