America in the 21st Century

In the U.S. presidential election of 2016, businessman Donald Trump defeated former Secretary of State Hillary Clinton, a result that was considered very unlikely by most media forecasts and has led to considerable protest.

Describe the election of 2016

Voters selected members of the Electoral College in each state, in most cases by "winner-takes-all" plurality; those state electors in turn voted for a new president and vice president on December 19, 2016. While Clinton received about 2.9 million more votes nationwide, a margin of 2.1%, or 48% of the total cast, Trump won a decisive victory in the Electoral College, winning 30 states with 306 pledged electors out of 538. He won the perennial swing states of Florida, Iowa, and Ohio, as well as Clinton's "blue wall" states of Michigan, Pennsylvania and Wisconsin, which had been Democratic strongholds in presidential elections since the 1990s. Leading up to the election, a Trump victory was projected unlikely by most media forecasts.

Trump is the fifth person in U.S. history to become president despite losing the nationwide popular vote. He is the first president without any prior experience in public service, while Clinton was the first woman to be the presidential nominee of a major American party.

The series of presidential primary elections and caucuses took place between February and June 2016, staggered among the 50 states, the District of Columbia and U.S. territories. This nominating process was also an indirect election, where voters cast ballots for a slate of delegates to a political party's nominating convention, who in turn elected their party's presidential nominee. The 2016 Republican National Convention took place from July 18-21, 2016 in Cleveland, Ohio, while the 2016 Democratic National Convention took place from July 25-28, 2016 in Philadelphia, Pennsylvania.

Businessman and reality television personality Donald Trump became the presumptive presidential nominee of the Republican Party on May 3, 2016, after his win in the Indiana primary and the subsequent suspensions of Ted Cruz's and John Kasich's campaigns. In July he was formally nominated at the Republican Convention along with Mike Pence as his running mate. His campaign received unprecedented media coverage and international attention. Many of his statements in interviews, on social media, and at campaign rallies were controversial or false.

Former Secretary of State and New York Senator Hillary Clinton became the presidential nominee of the Democratic Party in the general election. While nationwide opinion polls in 2015 indicated that Clinton was the front-runner for the 2016 Democratic presidential nomination, she faced challenges from Independent Senator Bernie Sanders of Vermont. After some close races, Clinton received the most votes and primary delegates in the 2016 Democratic primaries, and formally accepted her party's nomination for President of the United States on July 28, 2016 with vice presidential running mate Senator Tim Kaine. She became the first female candidate to be nominated for president by a major U.S. political party.

Hillary Clinton focused her candidacy on several themes, including raising middle class incomes, expanding women's rights, instituting campaign finance reform, and improving the Affordable Care Act. In March 2016, she laid out a detailed economic plan based on her economic philosophy of inclusive capitalism. She proposed a "clawback" that would rescind tax relief and other benefits for companies that move jobs overseas; providing incentives for companies that share profits with employees, communities, and the environment, rather than focusing on short-term profits to increase stock value and rewarding shareholders; increasing collective bargaining rights; and placing an "exit tax" on companies that move their headquarters out of America in order to pay a lower tax rate overseas.

Donald Trump's campaign drew heavily on his personal image, enhanced by his previous media exposure. The primary slogan of the Trump campaign, extensively used on campaign merchandise, was "Make America Great Again." The red baseball cap with the slogan emblazoned on the front became a symbol of the campaign, and has been frequently donned by Trump and his supporters. Trump's disdain for political correctness was a staple theme of his campaign and proved popular among his supporters. Many, including some mainstream commentators and some prominent Republicans, viewed him as appealing to racism, a charge that he "repeatedly and vehemently denies." Trump's most polarizing and widely reported proposals were about issues of immigration and border security, especially his proposed deportation of all illegal immigrants, the proposed construction of a substantial wall on the Mexico–United States border at Mexican expense, his characterizations of many Mexican immigrants as "criminals, drug dealers, rapists, etc," and a temporary ban on foreign Muslims entering the United States. Trump's right-wing populist positions—reported by The New Yorker to be nativist, protectionist, and semi-isolationist—differ in many ways from traditional conservatism. He opposed many free trade deals and military interventionist policies that conservatives generally support, and opposed cuts in Medicare and Social Security benefits. Moreover, he has insisted that Washington is "broken" and can only be fixed by an outsider.

Trump benefited from free media more than any other candidate. From the beginning of his campaign through February 2016, Trump received almost $2 billion in free media attention, twice the amount that Clinton received.

After three televised debates, the election was held on November 8, 2016. Democratic candidate Hillary Clinton cast her vote in the New York City suburb of Chappaqua, while Republican candidate Donald Trump voted in a Manhattan public school. Throughout the day, the election process went more smoothly than many had expected, with only a few reports of long lines and equipment problems. The Republican candidate performed surprisingly well in all battleground states, especially Florida, Ohio, and North Carolina. Even Wisconsin and Michigan, states that were predicted to vote Democratic, were won by Trump.

On November 9, 2016, at 3:00 AM Eastern Time, Trump secured over 270 electoral votes, the majority of the 538 electors in the Electoral College, enough to make him the president-elect of the United States. Clinton called Trump early on Wednesday morning, conceding defeat. Clinton asked her supporters to accept the result and hoped that Trump would be "a successful president for all Americans." In his victory speech Trump appealed for unity saying "it is time for us to come together as one united people" and praised Clinton who was owed "a major debt of gratitude for her service to our country."

In the Electoral College vote on December 19, for the first time since 1808, multiple faithless electors voted against their pledged qualified presidential candidate. Five Democrats rebelled in Washington and Hawaii, while two Republicans rebelled in Texas. Two Democratic electors, one in Minnesota and one in Colorado, were replaced after voting for Bernie Sanders and John Kasich respectively. Electors in Maine conducted a second vote after one of its members voted for Sanders; the elector then voted for Clinton. Ultimately, Trump received 304 electoral votes and Clinton garnered 227, while Colin Powell won three, and John Kasich, Ron Paul, Bernie Sanders, and Faith Spotted Eagle (a Native American activist) each received one.

Following the announcement of Trump's election, large protests broke out across the United States with some continuing for several days. Protesters have held up a number of different signs and chanted various shouts including "Not my president" and "We don't accept the president-elect." The movement organized on Twitter under the hashtags #Anti-trump and #NotMyPresident.

Trump was sworn into the office of the Presidency of the United States on Friday, January 20, 2017. The next day, the largest protest in U.S. history, the 2017 Women's March, was held in Washington D.C. and around the world. The rallies were aimed at Donald Trump and in support of women's rights and other issues including immigration reform, health care reform, protection of the natural environment, LGBTQ rights, racial justice, freedom of religion, and workers' rights. More than three times as many people attended the protest in Washington, D.C. as attended the Trump inauguration itself. 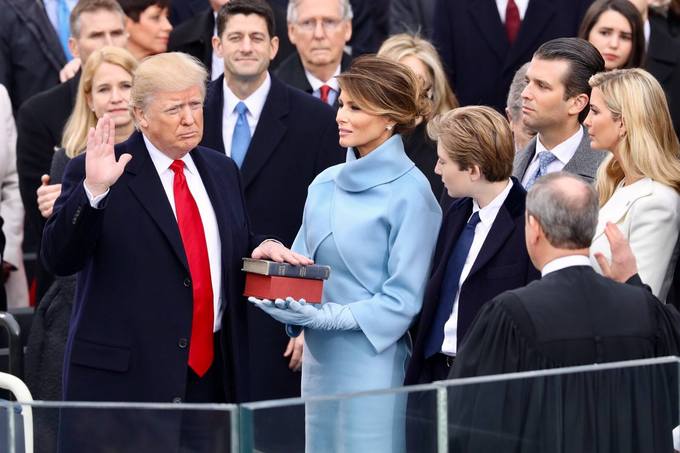 Donald Trump Sworn into Office: The inauguration of Donald Trump as 45th President was held on Friday, January 20, 2017. Within his first hour as president, he signed several executive orders, including an order to minimize "the economic burden" of the Affordable Care Act, also known as Obamacare.

AP Lang - I Am Part of the Resistance Inside the Trump Administration.docx

Essay_ The US-EU relation in a Trump Administration.pdf

Japan US China Relations during the Trump Administration and the Outlook for East Asia.pdf

As part of the Trump administration.docx

HUMANITIES D33 •  The University of Nairobi

Opinion _ I Am Part of the Resistance Inside the Trump Administration - The New York Times.pdf

The Investigation Into the Trump Administration.docx

Cognitive Dissonance and the Trump Administration.docx

Five Ways the Trump Administration Has Attacked the U.N. and International Human Rights Bodies - May

There's a Dangerous Bubble in the Fossil-Fuel Economy, and the Trump Administration Is Making It Wor

The Trump administration proposed changes to the C.docx

I am the part of the resistance inside the Trump administration.docx

Bureaucratic politics and leadership style of the Trump administration.docx

1. What are your thoughts to the Trump Administrations and Republic.docx

Trade policies of the United States with Mexico, Canada, and China during the Trump Administration (

Opinion _ I Am Part of the Resistance Inside the Trump Administration - The New York Times.pdf