The Scramble for Africa

Germany and the Desire for Colonies

Despite German Chancellor Otto Von Bismarck's opposition to overseas colonies, pressure from the German people to establish colonies for international prestige led to a significant empire during the Scramble for Africa.


The German colonial empire constituted the overseas colonies, dependencies, and territories of the German Empire. Short-lived attempts of colonization by individual German states occurred in preceding centuries, but crucial colonial efforts only began in 1884 with the Scramble for Africa. Germany lost control when World War I began and its colonies were seized by its enemies in the first weeks of the war. However. some military units held out longer: German South-West Africa surrendered in 1915, Kamerun in 1916, and German East Africa only in 1918 by war's end. Germany's colonial empire was officially confiscated with the Treaty of Versailles after Germany's defeat in the war, and the various units became League of Nations mandates under the supervision (but not ownership) of one of the victorious powers.

Until their 1871 unification, the German states had not concentrated on the development of a navy, and this essentially had precluded German participation in earlier imperialist scrambles for remote colonial territory – the so-called "place in the sun." Germany seemed destined to play catch-up. The German states prior to 1870 retained separate political structures and goals, and German foreign policy up to and including the age of German Chancellor Otto von Bismarck concentrated on resolving the "German question" in Europe and securing German interests on the continent.

Many Germans in the late 19th century viewed colonial acquisitions as a true indication of nationhood. Public opinion eventually arrived at an understanding that prestigious African and Pacific colonies went hand-in-hand with dreams of a world-class navy. Both aspirations would become reality, nurtured by a press replete with Kolonialfreunde (supporters of colonial acquisitions) and a myriad of geographical associations and colonial societies. Bismarck and many deputies in the Reichstag had no interest in colonial conquests merely to acquire square miles of territory.

In essence, Bismarck's colonial motives were obscure as he had said repeatedly "... I am no man for colonies." However, in 1884 he consented to the acquisition of colonies by the German Empire to protect trade, safeguard raw materials and export markets, and take opportunities for capital investment, among other reasons. In the very next year Bismarck shed personal involvement when he, according to Edward Crankshaw, "abandoned his colonial drive as suddenly and casually as he had started it" as if he had committed an error in judgment that could confuse the substance of his more significant policies. Bismarck even tried to give German South-West Africa away to the British.

In 1891, Kaiser Wilhelm II of Germany made a decisive break with former "Realpolitik" of Bismarck and established "Weltpolitik" ("world policy"). The aim of Weltpolitik was to transform Germany into a global power through aggressive diplomacy, the acquisition of overseas colonies, and the development of a large navy. The origins of the policy can be traced to a Reichstag debate in December 1897 during which German Foreign Secretary Bernhard von Bülow stated, "in one word: We wish to throw no one into the shade, but we demand our own place in the sun." 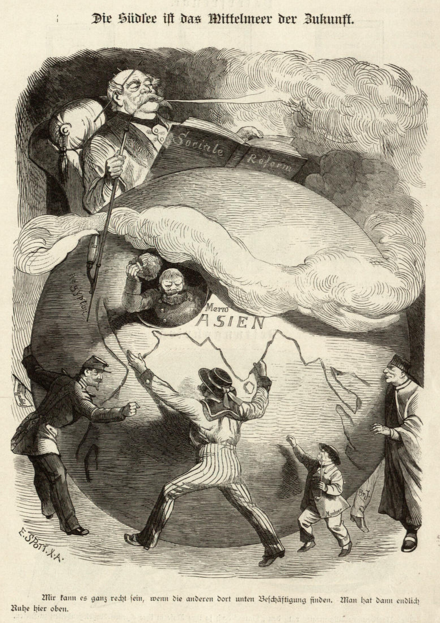 Otto Von Bismarck's Ambivalence: Cartoon from 1884. Bismarck is happy with other nations being busy "down there."

The rise of German imperialism and colonialism coincided with the latter stages of the "Scramble for Africa" during which enterprising German individuals, rather than government entities, competed with other already established colonies and colonialist entrepreneurs. With the Germans joining the race for the last uncharted territories in Africa and the Pacific that had not yet been carved up, competition for colonies involved major European nations and several lesser powers.

The German effort included the first commercial enterprises in the 1850s and 1860s in West Africa, East Africa, the Samoan Islands, and the unexplored north-east quarter of New Guinea with adjacent islands. German traders and merchants began to establish themselves in the African Cameroon delta and the mainland coast across from Zanzibar. At Apia and the settlements Finschhafen, Simpsonhafen and the islands Neu-Pommern and Neu-Mecklenburg, trading companies newly fortified with credit began expansion into coastal landholding. Large African inland acquisitions followed, mostly to the detriment of native inhabitants. All in all, German colonies comprised territory that makes up 22 countries today, mostly in Africa, including Nigeria, Ghana, and Uganda.

As Bismarck was converted to the colonial idea by 1884, he favored "chartered company" land management rather than establishment of colonial government due to financial considerations. Although temperate zone cultivation flourished, the demise and often failure of tropical low-land enterprises contributed to changing Bismarck’s view. He reluctantly acquiesced to pleas for help to deal with revolts and armed hostilities by often powerful rulers whose lucrative slaving activities seemed at risk. German native military forces initially engaged in dozens of punitive expeditions to apprehend and punish freedom fighters, at times with British assistance.

Bismarck’s successor in 1890, Leo von Caprivi, was willing to maintain the colonial burden of what already existed, but opposed new ventures. Others who followed, especially Bernhard von Bülow as foreign minister and chancellor, sanctioned the acquisition of the Pacific Ocean colonies and provided substantial treasury assistance to existing protectorates to employ administrators, commercial agents, surveyors, local "peacekeepers," and tax collectors. Kaiser Wilhelm II understood and lamented his nation's position as colonial followers rather than leaders. In an interview with Cecil Rhodes in March 1899 he stated the alleged dilemma clearly: "Germany has begun her colonial enterprise very late, and was, therefore, at the disadvantage of finding all the desirable places already occupied."

According to historian William Roger Louis, in the years before the outbreak of the World War, British colonial officers viewed the Germans as deficient in “colonial aptitude,” but “whose colonial administration was nevertheless superior to those of the other European states." Anglo-German colonial issues in the decade before 1914 were minor, and both the British and German empires took conciliatory attitudes. Once war was declared in late July 1914 Britain and its allies promptly moved against the colonies, the public was informed that German colonies were a threat. The British position that Germany was a uniquely brutal and cruel colonial power originated during the war. By 1916, only in remote jungle regions in East Africa did the German forces hold out.

Germany and the Herero

The Herero and Nama genocide was a campaign of racial extermination and collective punishment that the German Empire undertook in German South-West Africa (modern-day Namibia) against the Herero and Nama people, considered one of the first genocides of the 20th century.

During the 17th and 18th centuries, the Herero migrated to what is today Namibia from the east and established themselves as herdsmen. In the beginning of the 19th century, the Nama from South Africa, who already possessed some firearms, entered the land and were followed by white merchants and German missionaries. At first, the Nama began displacing the Herero, leading to bitter warfare between the two groups that lasted the greater part of the 19th century. Later, the Nama and Herero entered a period of cultural exchange.

During the late 19th century, the first Europeans arrived to permanently settle the land. Primarily in Damaraland, German settlers acquired land from the Herero to establish farms. In 1883, merchant Franz Adolf Eduard Lüderitz entered into a contract with the native elders. The exchange later became the basis of German colonial rule. The territory became a German colony under the name of German South-West Africa.

Soon after, conflicts between the German colonists and the Herero herdsmen began. These were frequently disputes about access to land and water, but also the legal discrimination against the native population by the white immigrants.

Genocide Against the Herero and Nama People

According to some historians, "The war against the Herero and Nama was the first in which German imperialism resorted to methods of genocide." Roughly 80,000 Herero lived in German South-West Africa at the beginning of Germany’s colonial rule over the area, while after their revolt was defeated, they numbered approximately 15,000. In a period of four years, 1904-1907, approximately 65,000 Herero and 10,000 Nama people perished.

The first phase of the genocide was characterized by widespread death from starvation and dehydration due to the prevention of the retreating Herero from leaving the Namib Desert by German forces. Once defeated, thousands of Herero and Nama were imprisoned in concentration camps, where the majority died of disease, abuse, and exhaustion.

During the Herero genocide Eugen Fischer, a German scientist, came to the concentration camps to conduct medical experiments on race, using children of Herero people and mulatto children of Herero women and German men as test subjects. Together with Theodor Mollison he also experimented upon Herero prisoners. Those experiments included sterilization and injection of smallpox, typhus, and tuberculosis. The numerous mixed offspring upset the German colonial administration, which was concerned with maintaining "racial purity." Eugen Fischer studied 310 mixed-race children, calling them "bastards" of "lesser racial quality." Fischer also subjected them to numerous racial tests such as head and body measurements and eye and hair examinations. In conclusion of his studies he advocated genocide of alleged "inferior races" stating that "whoever thinks thoroughly the notion of race, can not arrive at a different conclusion." Fischer's torment of the children was part of a wider history of abusing Africans for experiments, and echoed earlier actions by German anthropologists who stole skeletons and bodies from African graveyards and took them to Europe for research or sale.

In 1985, the United Nations' Whitaker Report classified the aftermath as an attempt to exterminate the Herero and Nama peoples of South-West Africa, and therefore one of the earliest attempts at genocide in the 20th century. In 2004, the German government recognized and apologized for the events, but ruled out financial compensation for the victims' descendants. In July 2015, the German government and the speaker of the Bundestag officially called the events a "genocide" and "part of a race war." However it has refused to consider reparations.

In recent years scholars have debated the "continuity thesis" that links German colonialist brutalities to the treatment of Jews, Poles, and Russians during World War II. Some historians argue that Germany's role in Africa gave rise to an emphasis on racial superiority at home, which in turn was used by the Nazis. Other scholars, however, are skeptical and challenge the continuity thesis. 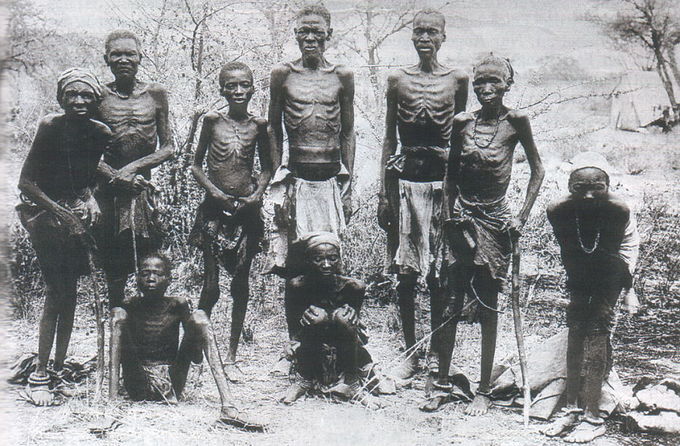 Surviving Herero: Photograph of emaciated survivors of the German genocide against Herero after an escape through the arid desert of Omaheke

To what extent did German Blitzkrieg strategy affect the Germans loss at the battle of Stalingrad.do