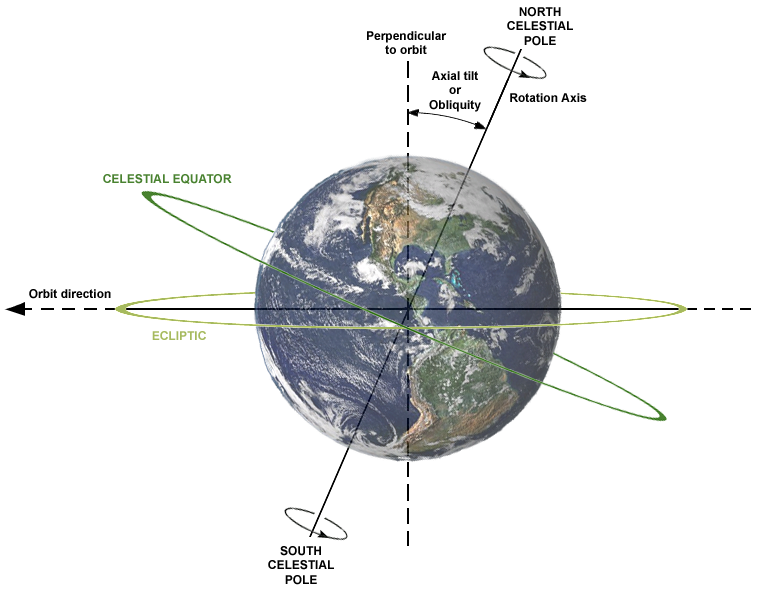 Imagine a line passing through the center of Earth that goes through both the North Pole and the South Pole. This imaginary line is called an axis. Earth spins around its axis, just as a top spins around its spindle. This spinning movement is called Earth’s rotation. At the same time that the Earth spins on its axis, it also orbits, or revolves around the Sun. This movement is called revolution. An observer in space will see that Earth requires 23 hours, 56 minutes, and 4 seconds to make one complete rotation on its axis. But because Earth moves around the Sun at the same time that it is rotating, the planet must turn just a little bit more to reach the same place relative to the Sun. Hence the length of a day on Earth is actually 24 hours. At the equator, the Earth rotates at a speed of about 1,700 km per hour, but at the poles the movement speed is almost nothing. 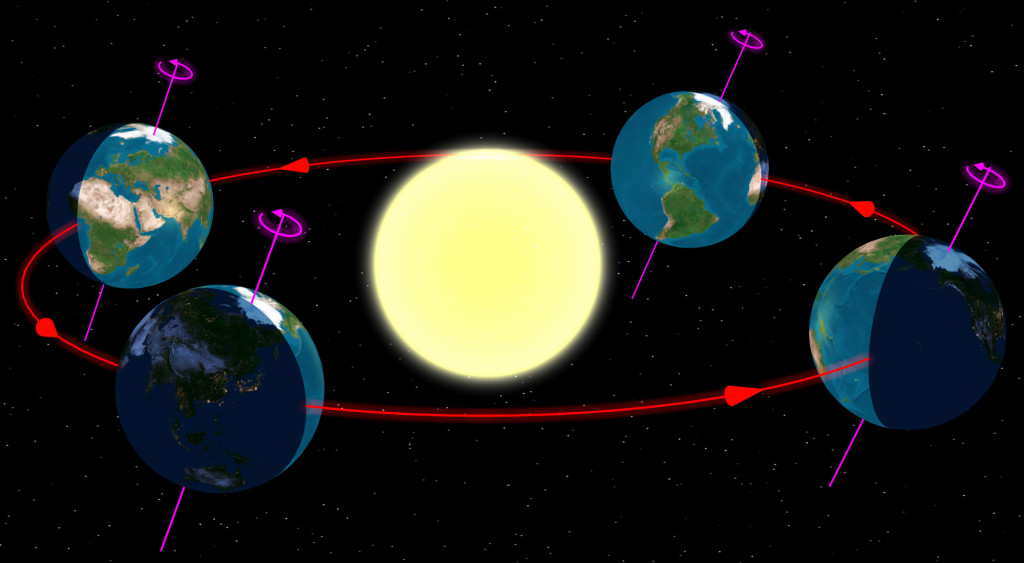 For Earth to make one complete revolution around the Sun takes 365.24 days. This amount of time is the definition of one year. The gravitational pull of the Sun keeps Earth and the other planets in orbit around the star. Like the other planets, Earth’s orbital path is an ellipse so the planet is sometimes farther away from the Sun than at other times. The closest Earth gets to the Sun each year is at perihelion (147 million km) on about January 3rd and the furthest is at aphelion (152 million km) on July 4th. Earth’s elliptical orbit has nothing to do with Earth's seasons. During one revolution around the Sun, Earth travels at an average distance of about 150 million km from the Sun. Earth revolves around the Sun at an average speed of about 27 km (17 mi) per second, but the speed is not constant. The planet moves slower when it is at aphelion and faster when it is at perihelion. The reason the Earth has seasons is that Earth is tilted 23 1/2 degrees from vertical on its axis. During the Northern Hemisphere summer the North Pole is tilted toward the Sun, and in the Northern Hemisphere winter the North Pole is tilted away from the Sun.

GEOG 2 •  University of the District of Columbia

CHAPTER II, SOLAR ENERGY TO EARTH AND THE SEASONS.pdf