You can trace the deformation a rock has experienced by seeing how it differs from its original horizontal, oldest-on-bottom position. This deformation produces geologic structures such as folds, joints, and faults that are caused by stresses. 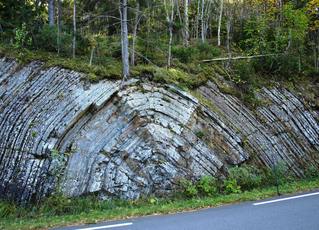 Rocks deforming plastically under compressive stresses crumple into folds. They do not return to their original shape. If the rocks experience more stress, they may undergo more folding or even fracture. There are three major types of rock folding: monoclines, synclines, and anticlines. A monocline is a simple bend in the rock layers so that they are no longer horizontal. Anticlines are folded rocks that arch upward and dip away from the center of the fold. The oldest rocks are at the center of an anticline and the youngest are draped over them. A syncline is a fold that bends downward, causing the youngest rocks to be at the center and the oldest on the outside. 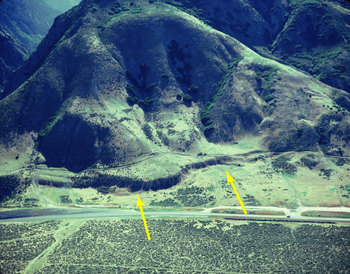 A rock under enough stress will eventually fracture. If there is no movement on either side of a fracture, the fracture is called a joint. But if the blocks of rock on one or both sides of a fracture move, the fracture is called a fault. Sudden motions along faults cause rocks to break and move suddenly, releasing the stored up stress energy to create an earthquake. A slip is the distance rocks move along a fault and can be up or down the fault plane. Slip is relative, because there is usually no way to know whether both sides moved or only one. Faults lie at an angle to the horizontal surface of the Earth. That angle is called the fault’s dip. The dip defines which of two basic types a fault is. If the fault’s dip is inclined relative to the horizontal, the fault is a dip-slip fault. There are two types of dip-slip faults. In normal faults, the crust is pulled apart by tensional stresses. Normal faults can be huge and are often times responsible for uplifting mountain ranges in regions experiencing tensional stress, such as the Basin-and-Range province in the western U.S. With reverse faults, the compression pushes one side of the fault over the other side so it somewhat overlaps. A type of reverse fault is a thrust fault, in which the fault plane angle is nearly horizontal. Rocks can slip many miles along thrust faults. A strike-slip fault is a dip-slip fault in which the dip of the fault plane is vertical and results from shear stresses. California’s San Andreas Fault is the world’s most famous strike-slip fault. It is a right-lateral strike slip fault, meaning that the opposite side has shifted to the right.

It is the power and strength of two or more converging continental plates smashing upwards that create mountain ranges. Stresses from this uplift cause folds, reverse faults, and thrust faults, which allow the crust to rise upwards. Subduction of oceanic lithosphere at convergent plate boundaries also builds mountain ranges.

When tensional stresses pull crust apart, it breaks into blocks that slide up and drop down along normal faults. The result is alternating mountains and valleys, known as a basin-and-range landscape.

FINANCE 5631 •  University of the Fraser Valley

Geography and Geology of Sindh PPTS.pptx