Data, data, data . . . data is everywhere. It’s collected every time you go to the grocery store and use their card to reduce the costs, when you click on a link on Facebook, or when you do any kind of search on a search engine like Google, Bing, or Yahoo!. It is used by your state department of transportation when you are driving on a freeway or when you use an app on a smart phone. Futurists believe that in the near future, face recognition technology will allow a sales representative to know what types of clothes you like to buy based on a database of your recent purchases at their store and others. There are two basic types of data you need to know: spatial and non-spatial data. Spatial data, also called geospatial data, is data that can be linked to a specific location on Earth. Geospatial data is becoming “big business” because it isn’t just data, but data that can be located, tracked, patterned, and modeled based on other geospatial data. Census information that is collected every 10 years is an example of spatial data. Non-spatial data is data that cannot be specifically traced to a specific location. This might include the number of people living in a household, enrollment within a specific course, or gender information. But non-spatial data can easily become spatial data if it can be linked in some way to a location. Geospatial technology specialists have a method called geocoding that can be used to give non-spatial data a geographic location. Once data has a spatial component associated with it, the types of questions that can be asked dramatically changes. 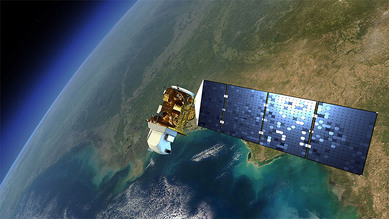 Remote sensing can be defined as human’s ability to study objects without being in direct physical contact with them. So for example, your eyes are a form of passive remote sensing because they are “passively” absorbing electromagnetic energy within the visible spectrum from distant objects and your brain is processing that energy into information. There are a variety of remote sensing platforms or devices, but they can basically be categorized into the following that we will look at throughout the course. Satellite imagery is a type of remotely sensed imagery taken of the Earth's surface, which is produced from orbiting satellites that gather data via electromagnetic energy. Next is aerial photography, which is film-based or digital photographs of the Earth, usually from an airplane or non-piloted drone. Images are either taken from a vertical or oblique position. Third is radar, which is an interesting form of remote sensing technology that uses microwave pulses to create imagery of features on Earth. This can be from a satellite image or ground-based Doppler radar for weather forecasting. Finally, a fast growing realm of remote sensing is called Light Detection and Ranging or Lidar, which is a form of remote sensing that measures distances to objects using laser pulses of light. 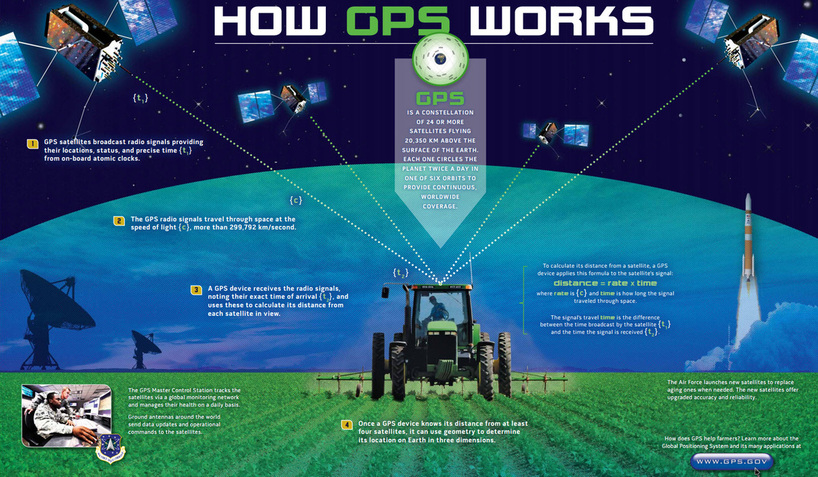 Another type of geospatial technology is the global positioning system (GPS) and a key technology for acquiring accurate control points on Earth’s surface. To determine the location of a GPS receiver on Earth’s surface, a minimum of four satellites are required using a mathematical process called triangulation. Normally the process of triangulation requires a minimum of three transmitters, but because the energy sent from the satellite is traveling at the speed of light, minor errors in calculation could result in large location errors on the ground. Thus, a minimum of four satellites is often used to reduce this error. This process using the geometry of triangles to determine location is used not only in GPS, but a variety of other location needs like finding the epicenter of earthquakes. A user can use a GPS receiver to determine their location on Earth through a dynamic conversation with satellites in space. Each satellite transmits orbital information called the ephemeris using a highly accurate atomic clock along with its orbital position called the almanac. The receiver will use this information to determine its distance from a single satellite using the equation D = rt, where D = distance, r = rate or the speed of light (299,792,458 meters per second), and t = time using the atomic clock. The atomic clock is required because the receiver is trying to calculate distance, using energy that is transmitted at the speed of light. Time will be fractions of a second and requires a “time clock” of the upmost accuracy. 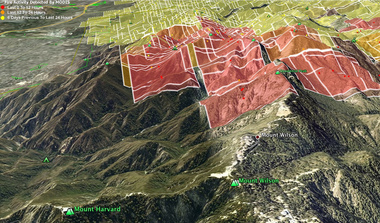 There is a technology that exists that can bring together remote sensing data, GPS data points, spatial and non-spatial data, and spatial statistics into a single, dynamic system for analysis and that is a geographic information system (GIS). A GIS is a powerful database system that allows users to acquire, organize, store, and most importantly analyze information about the physical and cultural environments. A GIS views the world as overlaying physical or cultural layers, each with quantifiable data that can be analyzed. A single GIS map of a national forest could have layers such as elevation, deciduous trees, evergreens, soil type, soil erosion rates, rivers and tributaries, major and minor roads, forest health, burn areas, regrowth, restoration, animal species type, trails, and more. Each of these layers would contain a database of information specific to that layer. Nearly every discipline, career path, or academic pursuit uses geographic information systems because of the vast amount of data and information about the physical and cultural world. Disciplines and career paths that use GIS include: conservation, ecology, disaster response and mitigation, business, marketing, engineering, sociology, demography, astronomy, transportation, health, criminal justice and law enforcement, travel and tourism, news media, and the list could endlessly go on.

GIS primarily works from two different spatial models: raster and vector. Raster based GIS models are images much like a digital picture. Each image is broken down into a series of columns and rows of pixels and each pixel is georeferenced to somewhere on Earth's surface is represents a specific numeric value—usually a specific color or wavelength within the electromagnetic spectrum. Most remote sensing images come into a GIS as a raster layer. The other type of GIS model is called a vector model. Vector based GIS models are based on the concept of points that are again georeferenced (i.e. given an x-, y-, and possibly z-location) to somewhere specific on the ground. From points, lines can be created by connecting a series of points and areas can be created by closing loops of vector lines. For each of these vector layers, a database of information can be attributed to it. So for example, a vector line of rivers could have a database associated with it such as length, width, stream flow, government agencies responsible for it, and anything else the GIS user wants tied to it. What these vector models represent is also a matter of scale. For example, a city can be represented as a point or a polygon depending on how zoomed in you are to the location. A map of the world would show cities as points, whereas a map of a single county may show the city as a polygon with roads, populations, pipes, or grid systems within it.

GEG 102-Blackboard (Topic 1-This is Geography).pdf

Unit 1- Introduction to Geography as a Discipline.pdf