Heat Transfer in the Atmosphere

Heat moves in the atmosphere the same way it moves through the solid Earth or another medium. Radiation is the transfer of energy between two objects by electromagnetic waves. Heat radiates from the ground into the lower atmosphere.

In conduction, heat moves from areas of more heat to areas of less heat by direct contact. Warmer molecules vibrate rapidly and collide with other nearby molecules, transferring their energy. In the atmosphere, conduction is more effective at lower altitudes where air density is higher; transfers heat upward to where the molecules are spread further apart or transfers heat laterally from a warmer to a cooler spot, where the molecules are moving less vigorously.

Heat transfer by movement of heated materials is called convection. Heat that radiates from the ground initiates convection cells in the atmosphere.

About half of the solar radiation that strikes the top of the atmosphere is filtered out before it reaches the ground. This energy can be absorbed by atmospheric gases, reflected by clouds, or scattered. Scattering occurs when a light wave strikes a particle and bounces off in some other direction.

About 3 percent of the energy that strikes the ground is reflected back into the atmosphere. The rest is absorbed by rocks, soil, and water and then radiated back into the air as heat, or infrared radiation. These infrared wavelengths can only be seen by infrared sensors.

Because solar energy continually enters Earth’s atmosphere and ground surface, is the planet getting hotter? The answer is generally no (although some global warming or cooling does occur over time) because energy from Earth escapes into space through the top of the atmosphere. If the amount that exits is equal to the amount that comes in, then average global temperature stays the same. This means that the planet’s heat budget is in balance. What happens if more energy comes in than goes out? If more energy goes out than comes in? 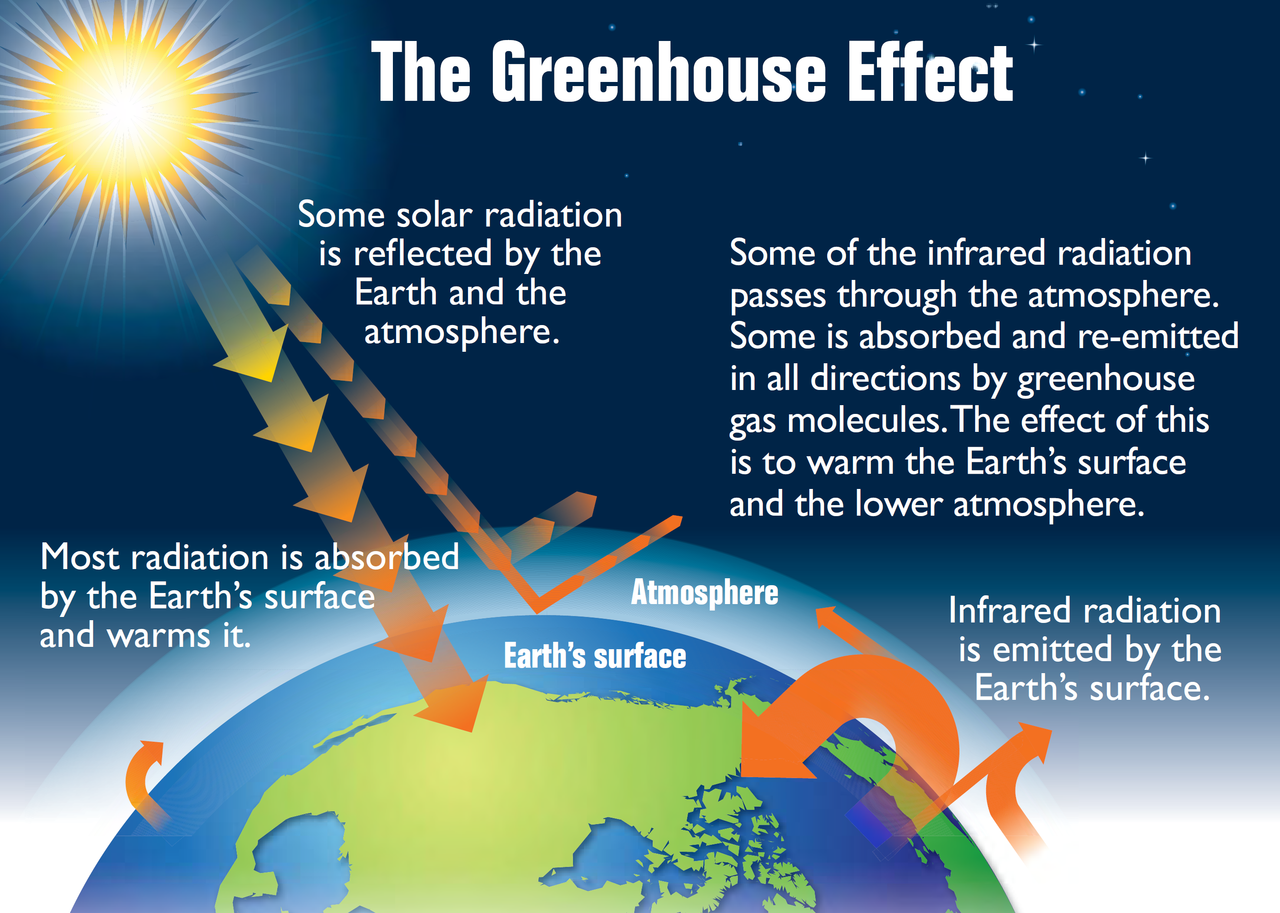 Greenhouse gases include CO2, H2O, methane, O3, nitrous oxides (NO and NO2), and chlorofluorocarbons (CFCs). All are a normal part of the atmosphere except CFCs. The table below shows how each greenhouse gas naturally enters the atmosphere.

Different greenhouse gases have different abilities to trap heat. For example, one methane molecule traps 23 times as much heat as one CO2 molecule. One CFC-12 molecule (a type of CFC) traps 10,600 times as much heat as one molecule of CO2. Still, CO2 is a very important greenhouse gas because it is much more abundant in the atmosphere. Human activity has significantly raised the levels of many of greenhouse gases in the atmosphere. Methane levels are about 2 1/2 times higher as a result of human activity. Carbon dioxide has increased more than 35 percent. CFCs have only recently existed.

The Atmosphere: Principles and Concepts: Introduction to Physical Geography.pdf

Heat transfer is that the exchange of thermal energy between physical systems.docx

During an adiabatic process there is no heat transfer into or out of the system.docx

Energy Transfer in the Atmosphere.ppt

CSCI 536 •  University of the District of Columbia