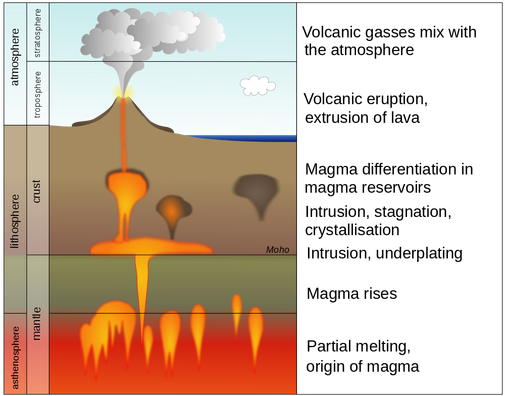 In 1980, Mount St. Helens blew up in the costliest and deadliest volcanic eruption in United States history. The eruption killed 57 people, destroyed 250 homes and swept away 47 bridges. Mount St. Helens today still has minor earthquakes and eruptions, and now has a horseshoe-shaped crater with a lava dome inside. The dome is formed of viscous lava that oozed into place. It should first be noted that magma is molten material inside the earth, whereas lava is molten material on the surface of the earth. The reason for the distinction is because lava can cool quickly from the air and solidify into rock rapidly, whereas magma may never reach the earth's surface. Volcanoes do not always erupt in the same way. Each volcanic eruption is unique, differing in size, style, and composition of erupted material. One key to what makes the eruption unique is the chemical composition of the magma that feeds a volcano, which determines (1) the eruption style, (2) the type of volcanic cone that forms, and (3) the composition of rocks that are found at the volcano.

The words that describe composition of igneous rocks also describe magma composition. Mafic magmas are low in silica and contain more dark, magnesium and iron-rich mafic minerals, such as olivine and pyroxene. Felsic magmas are higher in silica and contain lighter colored minerals such as quartz. The higher the amount of silica in the magma, the higher is its viscosity. Viscosity is a measure of a liquid’s resistance to flow. Magma with a higher viscosity is thicker and does not flow easily.

Viscosity determines what the magma will do. Mafic magma is not viscous and will flow easily to the surface. Felsic magma is viscous and does not flow easily. Most felsic magma will stay deeper in the crust and will cool to form igneous intrusive rocks such as granite and granodiorite. If felsic magma rises into a magma chamber, it may be too viscous to move and so it gets stuck. Dissolved gases become trapped by thick magma and the magma chamber begins to build pressure. 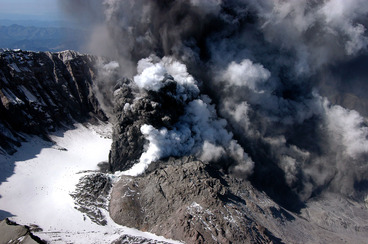 The type of magma in the chamber determines the type of volcanic eruption. A large explosive eruption creates even more devastation than the force of the atom bomb dropped on Nagasaki at the end of World War II in which more than 40,000 people died. A large explosive volcanic eruption is 10,000 times as powerful. Felsic magmas erupt explosively because of hot, gas-rich magma churning within its chamber. The pressure becomes so great that the magma eventually breaks the seal and explodes, just like when a cork is released from a bottle of champagne. Magma, rock, and ash burst upward in an enormous explosion creating volcanic ash called tephra. It should be noted that when looked under a microscope, the volcanic “ash” is actual microscopic shards of glass. That is why it is so dangerous to inhale the air following an eruption. Scorching hot tephra, ash, and gas may speed down the volcano’s slopes at 700 km/h (450 mph) as a pyroclastic flow. Pyroclastic flows knock down everything in their path. The temperature inside a pyroclastic flow may be as high as 1,000 degrees C (1,800 degrees F).

Prior to the Mount St. Helens eruption in 1980, the Lassen Peak eruption on May 22, 1915, was the most recent Cascades eruption. A column of ash and gas shot 30,000 feet into the air. This triggered a high-speed pyroclastic flow, which melted snow and created a volcanic mudflow known as a lahar. Lassen Peak currently has geothermal activity and could erupt explosively again. Mt. Shasta, the other active volcano in California, erupts every 600 to 800 years. An eruption would most likely create a large pyroclastic flow, and probably a lahar. Of course, Mt. Shasta could explode and collapse like Mt. Mazama did in Oregon, forming Crater Lake.

Volcanic gases can form poisonous and invisible clouds in the atmosphere that could contribute to environmental problems such as acid rain and ozone destruction. Particles of dust and ash may stay in the atmosphere for years, disrupting weather patterns and blocking sunlight.

Mafic magma creates gentler effusive eruptions. Although the pressure builds enough for the magma to erupt, it does not erupt with the same explosive force as felsic magma. People can usually be evacuated before an effusive eruption, so they are much less deadly. Magma pushes toward the surface through fissures and reaches the surface through volcanic vents. Download this video of a channelized flow of lava in Hawaii.

Low-viscosity lava flows down mountainsides. Differences in composition and where the lava erupts results in different lava types such as a smooth, ropy form called pahoehoe and a jagged, chunky form called aa. Although effusive eruptions rarely kill anyone, they can be destructive. Even when people know that a lava flow is approaching, there is not much anyone can do to stop it from destroying a building, road, or other infrastructure. 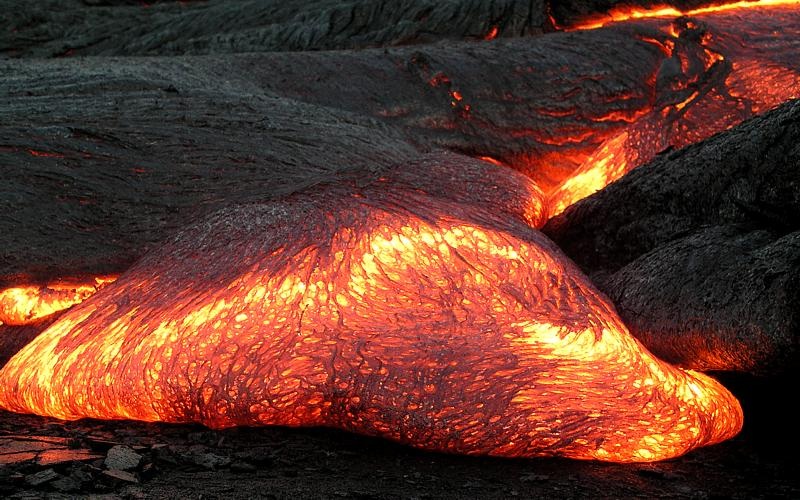 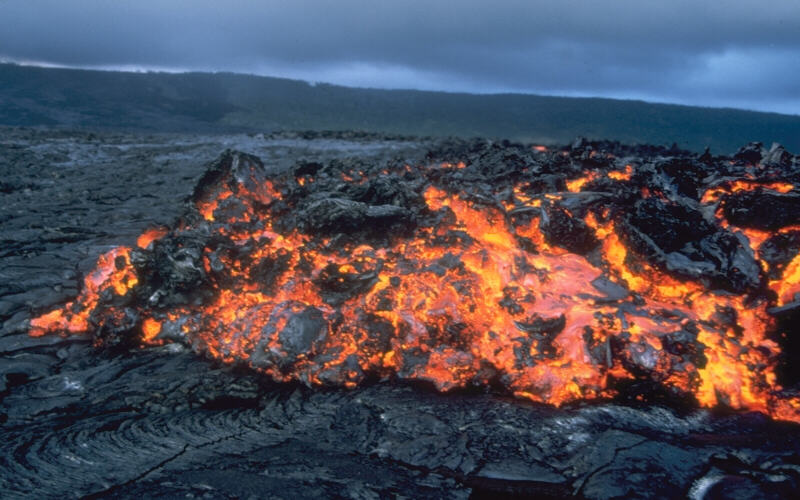 EDUC 1 •  Lyceum of the Philippines University

Physical Geography of the South California.docx