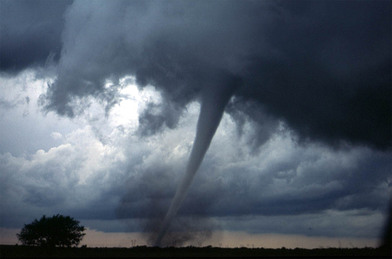 Tornadoes, also called twisters, are fierce products of severe thunderstorms. As air in a thunderstorm rises, the surrounding air races in to fill the gap, forming a funnel. A tornado lasts from a few seconds to several hours. The average wind speed is about 177 kph (110 mph), but some winds are much faster. A tornado travels over the ground at about 45 km per hour (28 miles per hour) and goes about 25 km (16 miles) before losing energy and disappearing.

An individual tornado strikes a small area, but it can destroy everything in its path. Most injuries and deaths from tornadoes are caused by flying debris. In the United States an average of 90 people are killed by tornadoes each year. The most violent two percent of tornadoes account for 70% of the deaths by tornadoes.Tornadoes form at the front of severe thunderstorms. Lines of these thunderstorms form in the spring where where maritime tropical (mT) and continental polar (cP) air masses meet. Although there is an average of 770 tornadoes annually, the number of tornadoes each year varies greatly.

In late April 2011, the situation was ripe for the deadliest set of tornadoes in 25 years. In addition to the meeting of cP and mT mentioned above, the jet stream was blowing strongly in from the west. The result was more than 150 tornadoes reported throughout the day.The entire region was alerted to the possibility of tornadoes in those late April days. But meteorologists can only predict tornado danger over a very wide region. No one can tell exactly where and when a tornado will touch down. Once a tornado is sighted on radar, its path is predicted and a warning is issued to people in that area. The exact path is unknown because tornado movement is not very predictable.

The intensity of tornadoes is measured on the Fujita Scale, which assigns a value based on wind speed and damage.

How to protect your self from tornadoes.docx

Lecture 05 - World Regions I - The United States & Canada I - student-A2L.pdf