Transport of Particles by Wind

The power of wind to erode depends on particle size, wind strength, and whether the particles are able to be picked up. Wind is a more important erosional force in arid than humid regions (although fluvial erosion, or erosion by running water, is still more powerful than wind erosion, even in deserts). Wind transports small particles, such as silt and clay, over great distances, even halfway across a continent or an entire ocean basin. Particles may be suspended for days. Wind more easily picks up particles on ground that has been disturbed, such as a construction site or a sand dune. Just like flowing water, wind transports particles as both bed load and suspended load. For wind, bed load is made of sand-sized particles, many of which move by saltation. The suspended load is very small particles of silt and clay. 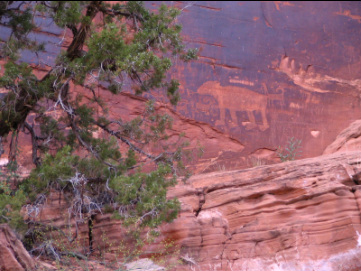 Aeolian processes are more important in arid regions than in humid regions because winds are often stronger and there is less ground cover to hold loose material in place. In humid areas, water and vegetation bind the soil so it is harder to pick up. In arid regions, small particles are selectively picked up and transported. As they are removed, the ground surface gets lower and rockier as a result of deflation. What is left is desert pavement, a surface covered by gravel sized particles that are not easily moved by wind. Particles moved by wind do the work of abrasion. As a grain strikes another grain or surface it erodes that surface. Abrasion by wind may polish natural or human-made surfaces, such as buildings. Stones that have become polished and faceted due to abrasion by sand particles are called ventifacts. Exposed rocks in desert areas often develop a dark brown to black coating called desert varnish. Wind transports clay-sized particles that chemically react with other substances at high temperatures. The coating is formed of iron and manganese oxides. Often times petroglyphs are carved into the desert varnish by earlier civilizations in arid regions. 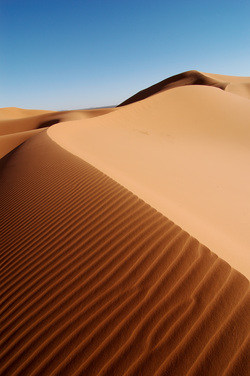 Deserts and seashores sometimes have sand dunes. Beach dunes have different compositions depending on their location. Beach dunes are usually quartz because in humid areas other minerals weather into clay. In the tropics, sand dunes may be composed of calcium carbonate, which is common. In deserts, sand dunes may be composed of a variety of minerals. There is little weathering and so less stable minerals are left behind. Dune sands are usually very uniform in size and shape. Particles are sand-sized, because larger particles are too heavy for the wind to transport by suspension. They are rounded, since rounded grains roll more easily than angular grains. For sand dunes to form there must be an abundant supply of sand and steady winds. A strong wind slows down, often over some type of obstacle, such as a rock or some vegetation and drops its sand. As the wind moves up and over the obstacle, it increases in speed. It carries the sand grains up the gently sloping, upwind side of the dune by saltation. As the wind passes over the dune, its speed decreases. Sand cascades down the crest, forming the slip face of the dune. The slip face is steep because it is at the angle of repose for dry sand, which is about 34 degrees. Wind deposits dune sands layer by layer. If the wind changes direction, cross beds form. Cross beds are named for the way each layer is formed at an angle to the ground. The types of sand dune that forms depends on the amount of sand available, the character and direction of the wind, and the type of ground the sand is moving over. 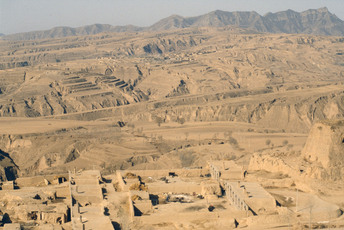 Windblown silt and clay deposited layer on layer over a large area are called loess, which comes from the German word loose. Loess deposits form downwind of glacial deposits, where fine particles are available. Loess deposits make very fertile soils in many regions of the world, such as the Palouse region of southeastern Washington state.

Lecture 9 Pollutant Transport by the Wind.docx

PHY 104A Particles and Projectiles

PHY 104A •  University of California, Davis

DIFFERENCE OF A PARTICLE AND A WAVE.docx

ECE 1 •  Polytechnic University of the Philippines