What are common things that we connect to wires?

We often take a lot of things for granted. We just assume that we will get electric power when we connect a plug to an electrical outlet. The wire that comprises that outlet is almost always copper, a material that conducts electricity well. The unique properties of the solid copper allow electrons to flow freely through the wire and into whatever device we connect it to. Then we can enjoy music, television, work on the computer, or whatever other activity we want to undertake.

Crystalline substances can be described by the types of particles in them and the types of chemical bonding that takes place between the particles. There are four types of crystals: (1) ionic , (2)metallic , (3) covalent network, and (4) molecular . Properties and several examples of each type are listed in the following table and are described in the Table below.

1. Ionic crystals -- The ionic crystal structure consists of alternating positively-charged cations and negatively-charged anions (see Figure below ). The ions may either be monatomic or polyatomic. Generally, ionic crystals form from a combination of Group 1 or 2 metals and Group 16 or 17 nonmetals or nonmetallic polyatomic ions. Ionic crystals are hard and brittle and have high melting points. Ionic compounds do not conduct electricity as solids, but do conduct when molten or in aqueous solution. 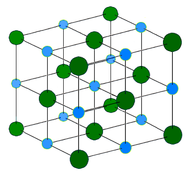 2. Metallic crystals -- Metallic crystals consist of metal cations surrounded by a “sea” of mobile valence electrons (see Figure below ). These electrons, also referred to as delocalized electrons, do not belong to any one atom, but are capable of moving through the entire crystal. As a result, metals are good conductors of electricity. As seen in the Table above , the melting points of metallic crystals display a wide range. 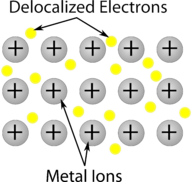 3. Covalent network crystals -- A covalent network crystal consists of atoms at the lattice points of the crystal, with each atom being covalently bonded to its nearest neighbor atoms (see Figurebelow ). The covalently bonded network is three-dimensional and contains a very large number of atoms. Network solids include diamond, quartz, many metalloids, and oxides of transition metals and metalloids. Network solids are hard and brittle, with extremely high melting and boiling points. Being composed of atoms rather than ions, they do not conduct electricity in any state. 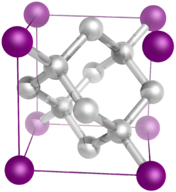 Diamond is a network solid and consists of carbon atoms covalently bonded to one another in a repeating three-dimensional pattern. Each carbon atom makes four single covalent bonds in a tetrahedral geometry. 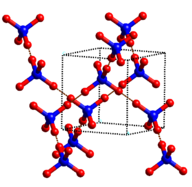 CHEM 4U1 •  University of Toronto

The smallest repeating unit that makes up the structure of a crystalline solid is called.docx

lesson 2. the structure of crystalline solids.pptx

Identify the type of crystalline solid.docx

9 Structure of Crystalline Solids; Mixtures of Gases and Solutions

Chapter 3 -The Structure of Crystalline Solids.ppt

CHEM 1007 •  The University of the West Indies - St. Augustine Campus

The Structure of Crystalline Solids.docx