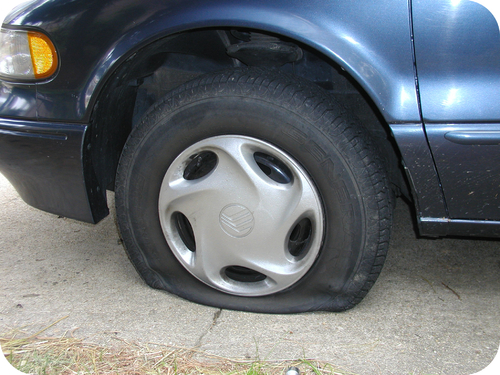 Have you ever gotten a flat tire?


When a tire goes flat, its shape changes. The tire might be flat because of a slow leak in the tire valve. It could be flat because it ran over a nail or screw and ended up with a small hole where the air can leak out over a period of time. Or it could go flat when it hits a large rock or other object while travelling at high speeds (this one is for those readers who enjoy detective movies or TV shows). What if a crystalline solid like LiBr were ever made into a tire (now there’s a weird idea)? When it encountered a blow, the crystal would break into small pieces. Since rubber is an amorphous solid, it has a very different set of physical properties.

Unlike a crystalline solid, an amorphous solid is a solid that lacks an ordered internal structure. Some examples of amorphous solids include rubber, plastic, and gels. Glass is a very important amorphous solid that is made by cooling a mixture of materials in such a way that it does not crystallize. Glass is sometimes referred to as a supercooled liquid rather than a solid. If you have ever watched a glassblower in action, you have noticed that he takes advantage of the fact that amorphous solids do not have a distinct melting point like crystalline solids do. Instead, as glass is heated, it slowly softens and can be shaped into all sorts of interesting forms. When a glass object shatters, it does so in a very irregular way, unlike crystalline solids, which always break into fragments that have the same shape as dictated by its crystal system.

Plastics are used for many purposes because they are inexpensive to produce and do not shatters like glass or ceramic materials. Since they are easily disposed of, the accumulation of plastic garbage has become a serious problem in many parts of the world. Recycling programs that help reuse the plastics are growing in popularity.

Watch a short video in the production of glass sheets: