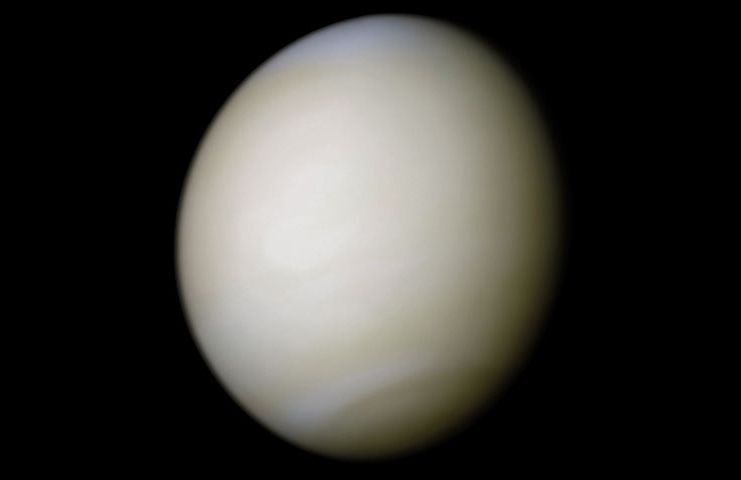 Venus is the planet nearest to us, but has a very different and hostile environment.

It has a surface temperature that averages around 450°C. The atmosphere is composed of carbon dioxide, but clouds of sulfuric acid move through the upper atmosphere, helping to create the extremely unfriendly conditions. Because of these conditions, Venus is not a place you want to visit on vacation.

Swedish chemist Svante Arrhenius (1859-1927) was the first to propose a theory to explain the observed behavior of acids and bases. Because of their ability to conduct a current, he knew that both acids and bases contained ions in solution. An Arrhenius acid is a compound, which ionizes to yield hydrogen ions (H + ) in aqueous solution.

Acids are molecular compounds with ionizable hydrogen atoms. Only hydrogen atoms that are part of a highly polar covalent bond are ionizable. Hydrogen chloride (HCl) is a gas at room temperature and under normal pressure. The H-Cl bond in hydrogen chloride is a polar bond. The hydrogen atom is electron deficient because of the higher electronegativity of the chlorine atom. Consequently, the hydrogen atom is attracted to the lone pair of electrons in a water molecule when HCl is dissolved in water. The result is that the H-Cl bond breaks, with both bonding electrons remaining with the Cl, forming a chloride ion. The H + ion attaches to the water molecule, forming a polyatomic ion called the hydronium ion. The hydronium ion (H 3 O + ) can be thought of as a water molecule with an attached hydrogen ion.

Figure 1. Formation of a hydronium ion.

Equations showing the ionization of an acid in water are frequently simplified by omitting the water molecule:

This is merely a simplification of the previous equation, but it is commonly used. Any hydrogen ions in an aqueous solution will be attached to water molecules as hydronium ions.

The O-H bond can be ionized to yield the H + ion and the acetate ion. The other hydrogen atoms in this molecule are not acidic.

The Table below lists some of the more common acids:

What can this be used for? 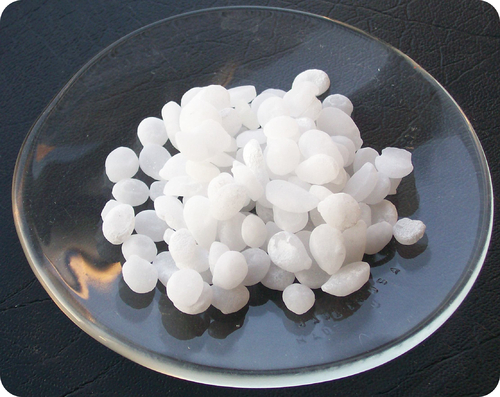 Sodium hydroxide is a versatile chemical. It can be used for such mundane purposes as cleaning clogged drains. Several commercial preparations contain sodium hydroxide for this purpose. It also has a number of applications in the food processing field. Ice cream is thickened using NaOH. If olives are soaked in a solution containing sodium hydroxide and other chemicals, the olives will turn black. Soft pretzels are made chewy by the application of sodium hydroxide to the food. This compound has been widely used in the synthesis of plastics, for etching aluminum, for paint removal, and is employed in the dehorning of cattle (in case that is a need you have).

An Arrhenius base is a compound, which ionizes to yield hydroxide ions (OH− ) in aqueous solution. The Table below lists several of the more common bases:

All of the bases listed in the table are solids at room temperature. Upon dissolving in water, each dissociates into a metal cation and the hydroxide ion. 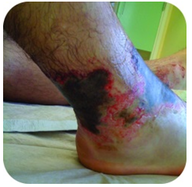 Figure 2. This foot has severe burns due to prolonged contact with a solution of sodium hydroxide, also known as lye.

Sodium hydroxide is a very caustic substance also known as lye. Lye is used as a rigorous cleaner and is an ingredient in the manufacture of soaps. Care must be taken with strong bases like sodium hydroxide, as exposure can lead to severe burns (see Figure 2 ).

Sodium belongs to the group of elements called the alkali metals. An alkaline solution is another name for a solution that is basic. All alkali metals react readily with water to produce the metal hydroxide and hydrogen gas. The resulting solutions are basic.