How does this worker's energy change as he climbs up and down the ladder?

Climbing a ladder takes energy. At every step, you are pushing yourself up against gravity, and accumulating potential energy. Coming back down releases that potential energy as you descend step by step. If you are not careful, you can release that potential energy all at once when you fall off the ladder (never a good idea). In addition, you take the climb or descent in steps. There is no “in-between” position on the ladder – your foot either hits a rung or it hits empty space and you are in trouble until you find a rung to stand on. 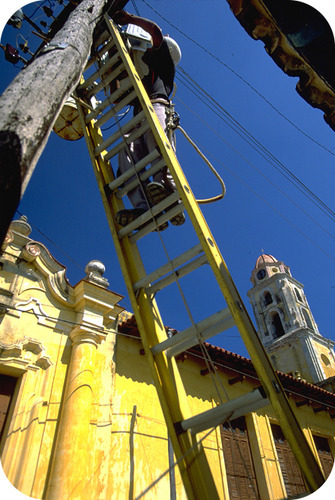 Following the discoveries of hydrogen emission spectra and the photoelectric effect, the Danish physicist Niels Bohr (1885–1962) proposed a new model of the atom in 1915. Bohr proposed that electrons do not radiate energy as they orbit the nucleus, but exist in states of constant energy which he called stationary states. This means that the electrons orbit at fixed distances from the nucleus (see Figure below). Bohr’s work was primarily based on the emission spectra of hydrogen. This is also referred to as the planetary model of the atom. It explained the inner workings of the hydrogen atom. Bohr was awarded the Nobel Prize in physics in 1922 for his work. 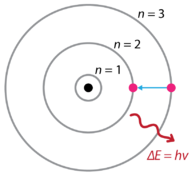 Bohr explained that electrons can be moved into different orbits with the addition of energy. When the energy is removed, the electrons return back to their ground state, emitting a corresponding amount of energy – a quantum of light, or photon. This was the basis for what later became known as quantum theory . This is a theory based on the principle that matter and energy have the properties of both particles and waves. It accounts for a wide range of physical phenomena, including the existence of discrete packets of energy and matter, the uncertainty principle, and the exclusion principle.

According to the Bohr model, often referred to as a planetary model, the electrons encircle the nucleus of the atom in specific allowable paths called orbits. When the electron is in one of these orbits, its energy is fixed. The ground state of the hydrogen atom, where its energy is lowest, is when the electron is in the orbit that is closest to the nucleus. The orbits that are further from the nucleus are all of successively greater energy. The electron is not allowed to occupy any of the spaces in between the orbits. An everyday analogy to the Bohr model is the rungs of a ladder. As you move up or down a ladder, you can only occupy specific rungs and cannot be in the spaces in between rungs. Moving up the ladder increases your potential energy, while moving down the ladder decreases your energy.

Bohr’s work had a strong influence on our modern understanding of the inner workings of the atom. However, his model worked well for an explanation for the emissions of the hydrogen atom, but was seriously limited when applied to other atoms. Shortly after Bohr published his planetary model of the atom, several new discoveries were made, which resulted in, yet again, a revised view of the atom.