How old do you think this TV is? 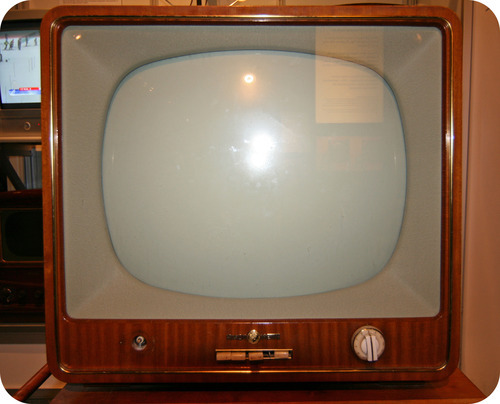 The TV set seen above is becoming harder and harder to find these days. The main reason is because they are older and based on outdated technology.  The new TV sets are flat screen technology that take up less space and give better picture quality, especially with the advent of high-definition broadcasting.

The technology used in the older TV sets used cathode ray tubes.  A beam of electrons was sprayed to a picture tube which was treated to react with the electrons to produce an image.  Similar CRT devices were used in computer monitors, now also replaced by flat screen monitors.

Discovery of the Electron

The first discovery of a subatomic particle was a result of experiments into the nature of the relationship between electricity and matter.

The first cathode ray tube prototype was developed by Heinrich Geissler, a German glassblower and physicist.  He used a mercury pump to create a vacuum in a tube. Geissler explored a number of techniques to remove air from the tube and to prevent leaks, as well as ways to get good connections of the wires in the tubes. 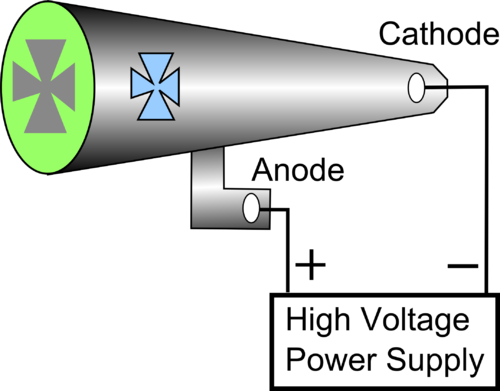 In 1878, Sir William Crookes, a British scientist, displayed the first cathode rays using a modification of the Geissler apparatus.  His major contribution to construction of the tube was to develop ways to evacuate almost all the air from the tube. Crookes also carried out many experiments using more reliable equipment to confirm earlier finding about the properties of cathode rays. He discovered two things which supported the hypothesis that the cathode ray consisted of a stream of particles:

Further Research with the Crookes Tube

Crookes’ work opened the door to a number of important discoveries. Other scientists were able to demonstrate that the “cathode ray” was actually a stream of electrons. In 1897, Karl Ferdinand Braun developed the first oscilloscope, using a cathode ray tube to see an electrical pulse as it passed through the instrument. The invention of television would not have been possible without the cathode ray tube.  Work with a modified system led to the discovery of X-rays in 1895 by the German physicist Wilhelm Roentgen.  This simple device has led to major advances in science and technology.

Both the cathode ray tube and the Cockcroft.docx

THE HISTORY OF THE CATHODE RAY TUBE.pdf

From the first cathode ray tube to the latest 4K LED TVs.docx

PHYSICS 123A •  University of Notre Dame