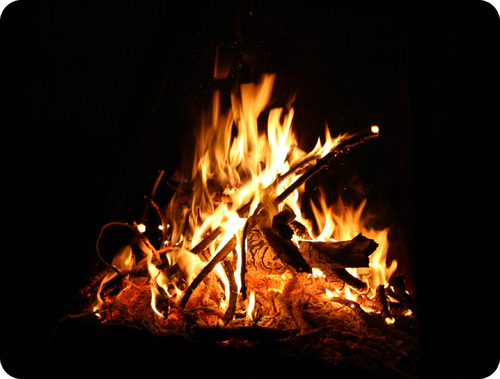 How do you keep warm?

A camp fire is an example of basic thermochemistry. The reaction is initiated by the application of heat from a match. The reaction converting wood to carbon dioxide and water (among other things) continues, releasing heat energy in the process. This heat energy can then be used to cook food, roast marshmallows, or just keep warm when it’s cold outside.

for an exothermic process is negative because the system is losing heat.

Heat flow is measured in one of two common units: the calorie and the joule. The joule (J) is the SI unit of energy.  The calorie is familiar because it is commonly used when referring to the amount of energy contained within food. A calorie (cal) is the quantity of heat required to raise the temperature of 1 gram of water by 1°C. For example, raising the temperature of 100 g of water from 20°C to 22°C would require 100 × 2 = 200 cal.

Calories contained within food are actually kilocalories (kcal). In other words, if a certain snack contains 85 food calories, it actually contains 85 kcal or 85,000 cal. In order to make the distinction, the dietary calorie is written with a capital C.

To say that the snack “contains” 85 Calories means that 85 kcal of energy are released when that snack is processed by your body.

Heat changes in chemical reactions are typically measured in joules rather than calories. The conversion between a joule and a calorie is shown below.

We can calculate the amount of heat released in kilojoules when a 400. Calorie hamburger is digested.

Do the problems (as many as you have time for) at the link below:

Are the following processes exothermic or endothermic.png

Exothermic and Endothermic - student made

CHEMISTRY 101 •  The University of Birmingham

Applications of Exothermic and Endothermic Reaction in Everyday Life.docx