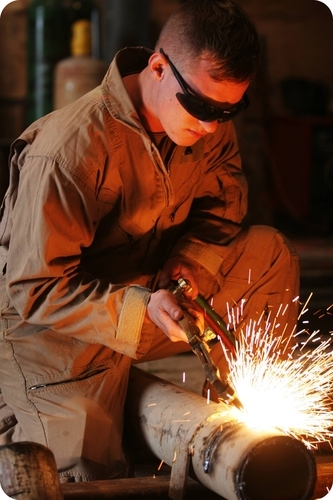 How much energy is involved in the operation of an acetylene torch?

Since there is a complex series of reactions taking place, simple methods for determining the heat of reaction will not work. We need to develop new approaches to these calculations.

It is sometimes very difficult or even impossible to measure the enthalpy change for a reaction directly in the laboratory. Some reactions take place extremely slowly, making a direct measurement unfeasible. In other cases, a given reaction may be an intermediate step in a series of reactions. Some reactions may be difficult to isolate because multiple side reactions may occur at the same time. Fortunately, it is possible to measure the enthalpy change for a reaction by an indirect method. Hess’s law of heat summation states that if two or more thermochemical equations can be added together to give a final equation, then the heats of reaction can also be added to give a heat of reaction for the final equation.

An example will illustrate how Hess’s law can be used. Acetylene (C 2 H 2 ) is a gas that burns at an extremely high temperature (3300°C) and is used in welding (pictured in the opening image). On paper, acetylene gas can be produced by the reaction of solid carbon (graphite) with hydrogen gas.

Unfortunately, this reaction would be virtually impossible to perform in the laboratory because carbon would react with hydrogen to form many different hydrocarbon products simultaneously. There is no way to create conditions under which only acetylene would be produced.

However, enthalpy changes for combustion reactions are relatively easy to measure. The heats of combustion for carbon, hydrogen, and acetylene are shown below along with each balanced equation.

To use Hess’s law, we need to determine how the three equations above can be manipulated so that they can be added together to result in the desired equation (the formation of acetylene from carbon and hydrogen).

The second reactant is hydrogen and its coefficient is a 1, as it is in the second combustion reaction. Therefore, that reaction will be used as written.

The product of the reaction is C 2 H 2 and its coefficient is also a 1. In combustion reaction #3, the acetylene is a reactant. Therefore, we will reverse reaction 3, changing the sign of the

Now, these three reactions can be summed together. Any substance that appears in equal quantities as a reactant in one equation and a product in another equation cancels out algebraically. The values for the enthalpy changes are likewise added.

So the heat of reaction for the combination of carbon with hydrogen to produce acetylene is 228.3 kJ. When one mole of acetylene is produced, 228.3 kJ of heat are absorbed, making the reaction endothermic.

Do the problems (as many as you have time for) at the link below: