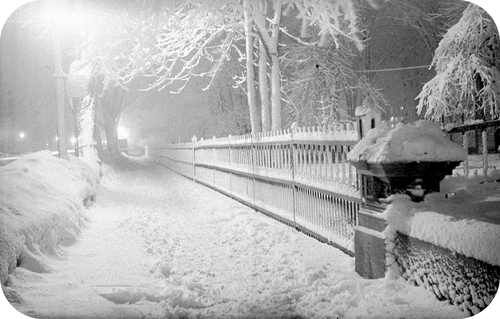 How did the early settlers do their laundry in the winter?

Of course, they could wash the clothes inside, but where to dry them?  There were no dryers available, so the clothes had to be hung up to dry.  In the winter, you would expect that ice would form on the clothes, but that didn’t happen.  Even in freezing weather, the water might freeze initially, but would eventually go off as a vapor – from solid ice directly to the gas stage.  There are still families today who have to rely on this cumbersome process to get their laundry done.

Vapor Pressure of a Solid

"Sublimation" reviews the vapor pressure of a liquid and its dependence upon temperature.  Solids also have a vapor pressure, though it is generally much less than that of a liquid.  A snow bank will gradually disappear even if the temperature stays below 0°C.  The snow does not melt, but instead passes directly from the solid state to the vapor state.  Sublimation is the change of state from a solid to a gas without passing through the liquid state.

"Dry ice," or solid carbon dioxide, is a substance that sublimes at atmospheric pressures.  Dry ice is very cold (−78°C) and so is used as a coolant for goods such as ice cream that must remain frozen during shipment.  Because the dry ice sublimes rather than melting, there is no liquid mess associated with its change of state as the dry ice warms. As you may have seen in demonstrations, dry ice merely transforms from a solid to a cold, steamy looking gas.  Ferrocene (an iron-containing compound) is usually purified by sublimation by gentle warming at atmospheric pressure.  In the Figure below , you can see the reddish ferrocene crystals deposited on the outside of that tube.  Deposition is the change of state from a gas to a solid.