In the previous section, we discussed how to write Lewis structures for molecules and polyatomic ions. As we have seen, however, in some cases, there is seemingly more than one valid structure for a molecule. We can use the concept of formal charges to help us predict the most appropriate Lewis structure when more than one is reasonable.

We must remember that the formal charge calculated for an atom is not the actual charge of the atom in the molecule. Formal charge is only a useful bookkeeping procedure; it does not indicate the presence of actual charges.

Assign formal charges to each atom in the interhalogen ion
ICl4−​.

Calculate the formal charge for each atom in the carbon monoxide molecule:

Assign formal charges to each atom in the interhalogen molecule BrCl3.

Determine the formal charge for each atom in NCl3.

The arrangement of atoms in a molecule or ion is called its molecular structure. In many cases, following the steps for writing Lewis structures may lead to more than one possible molecular structure—different multiple bond and lone-pair electron placements or different arrangements of atoms, for instance. A few guidelines involving formal charge can be helpful in deciding which of the possible structures is most likely for a particular molecule or ion:

Comparing the three formal charges, we can definitively identify the structure on the left as preferable because it has only formal charges of zero (Guideline 1).

Nitrous oxide, N2O, commonly known as laughing gas, is used as an anesthetic in minor surgeries, such as the routine extraction of wisdom teeth. Which is the likely structure for nitrous oxide?

The structure with a terminal oxygen atom best satisfies the criteria for the most stable distribution of formal charge:

The number of atoms with formal charges are minimized (Guideline 2), and there is no formal charge larger than one (Guideline 2). This is again consistent with the preference for having the less electronegative atom in the central position.

Which is the most likely molecular structure for the nitrite
(NO2−​)
ion?

You may have noticed that the nitrite anion in Example 3 can have two possible structures with the atoms in the same positions. The electrons involved in the N–O double bond, however, are in different positions:

If nitrite ions do indeed contain a single and a double bond, we would expect for the two bond lengths to be different. A double bond between two atoms is shorter (and stronger) than a single bond between the same two atoms. Experiments show, however, that both N–O bonds in
NO2−​
have the same strength and length, and are identical in all other properties.

The carbonate anion,
CO32−​,
provides a second example of resonance:

One oxygen atom must have a double bond to carbon to complete the octet on the central atom. All oxygen atoms, however, are equivalent, and the double bond could form from any one of the three atoms. This gives rise to three resonance forms of the carbonate ion. Because we can write three identical resonance structures, we know that the actual arrangement of electrons in the carbonate ion is the average of the three structures. Again, experiments show that all three C–O bonds are exactly the same.


The online Lewis Structure Maker from the University of Sydney includes many examples to practice drawing resonance structures.

2. The resonance forms are as follows:

6. The Lewis structures are as follows:

CO has the strongest carbon-oxygen bond, because there are is a triple bond joining C and O. CO2 has double bonds, and carbonate has 1.3 bonds.

The structure with formal charges of 0 is the most stable and would therefore be the correct arrangement of atoms.

16. The structure that gives zero formal charges is consistent with the actual structure:

20. The Lewis structure is 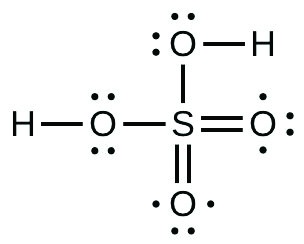 molecular structure: arrangement of atoms in a molecule or ion

resonance: situation in which one Lewis structure is insufficient to describe the bonding in a molecule and the average of multiple structures is observed

resonance forms: two or more Lewis structures that have the same arrangement of atoms but different arrangements of electrons

resonance hybrid: average of the resonance forms shown by the individual Lewis structures

CHEM 3A •  University of California, Berkeley