As you complete this reading consider the following:

The last global ice age trapped much of the world’s water in enormous continental glaciers. Twenty thousand years ago, ice sheets, some a mile thick, extended across North America as far south as modern-day Illinois and Ohio. With so much of the world’s water captured in these massive ice sheets, global sea levels plummeted and the receding waters exposed a land bridge between Asia and North America across the Bering Strait. The first Americans most likely migrated from Asia sometime between twelve and twenty-thousand years ago, if not before. Nomadic hunter-gatherers, they traveled in small bands following megafauna–enormous mammals that included mastodons and giant horses and bison–into the frozen Beringian tundra at the edge of North America. Then, sometime between twelve- and fourteen-thousand years ago, the glaciers’ long retreat freed them to enter the heart of North America. Behind them the land bridge closed and severed the two hemispheres, but in North America, as the ice retreated, humans filled the continents and by 11,000 years ago migrating peoples had reached the tip of South America. Hunters across the hemisphere preyed on plentiful game and natural foods and the population boomed.Whether because of overhunting, climate change, or a combination of the two, the megafauna population collapsed and mastodons, horses, and other large mammals disappeared. But native populations adapted: they fished, hunted small mammals, and gathered nuts and berries. Native peoples spread across North America. Woodland groups populated the Atlantic coast and later practiced agriculture to supplement rich hunting and fishing. On the plains, nomads followed bison herds. In the Northwest, natives exploited great salmon-filled rivers. And as paleo-Indians populated mountains, prairies, deserts, and forests, cultures and ways of life as arose as varied as the geography. Paleo-Indian groups spoke hundreds of languages and adopted distinct cultural practices. Woodland cultures burned underbrush to create vast park-like hunting grounds. Men typically hunted and women typically gathered and prepared wild foods. Rich and diverse diets fueled massive population growth across the continent.

Between two and eighteen million people lived north of present-day Mexico before the arrival of Europeans. They were not isolated among themselves, but connected by complex relationships and long trading routes. By 3,500 years ago, for instance, copper from present-day Canada and flint from modern-day Indiana could be found in Poverty Point, Louisiana.

Agriculture arose sometime between nine- and five-thousand years ago, almost simultaneously in the Eastern and Western Hemispheres. Mesoamericans in modern-day Mexico and Central America first domesticated maize and and developed perhaps the hemisphere’s first settled population around 1,200 BCE. The Olmecs grew maize (corn), built monumental stone structures, and established long-distance trade routes that extended across the region and eventually the hemisphere. Corn was high in caloric content, could be easily dried and stored, and, in Mesoamerica’s warm and fertile Gulf Coast, could sometimes be harvested twice in a year. Corn and other Mesoamerican crops spread across the peoples of North America in the centuries before contact with European invaders. Agriculture flourished especially in the fertile river valleys between the Mississippi River and Atlantic Ocean. There, three crops in particular–corn, beans, and squash, the so-called “three sisters”–provided nutritional needs necessary to sustain cities and civilizations.

The “three sisters” allowed for dramatic social change. Several expansive civilizations in the Midwest and Southwest demonstrated the potential for large-scale Indian civilizations. The so-called Mississippians exploited the rich floodplains of the Mississippi River and built a network of settlements across the Midwest and the American South. Mississippian society was stratified. Elites maintained power through kinship, gift-giving, and by controlled access to the spiritual world. The Mississippian’s signature mounds–enormous earthworks that could span acres and climb several stories tall–physically set priests and elites above the general population of craftsmen, agricultural workers, and slaves. 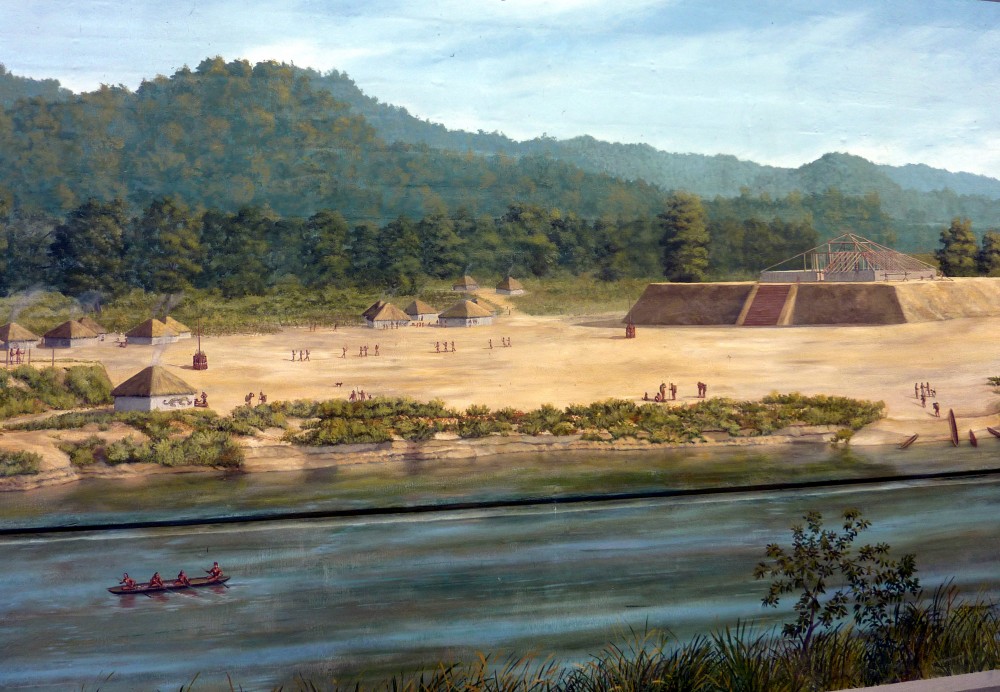 The Mississippians developed the largest and most advanced native civilization north of modern-day Mexico. Roughly one-thousand years ago, the largest Mississippian settlement, Cahokia, located just east of modern-day St. Louis, peaked at a population of between 10,000-30,000. It rivaled contemporary European cities in size. (No American city, in fact, would match Cahokia’s peak population levels until after the American Revolution). Located near the confluence of the Mississippi, Illinois, and Missouri Rivers, Cahokia became a key trading center with networks stretching from the Great Lakes to the American Southeast. The city itself spanned 2,000 acres. Religious ceremonies were performed atop vast “mounds,” enormous man-made earthen hills that still dot the Midwest and the American South. The largest mound at Cahokia, Monks Mound, rose ten-stories and was larger at its base than the great pyramids of Egypt. Scholars point to ecological collapse or mounting warfare as likely explanations for the Mississippians’ eventual collapse. 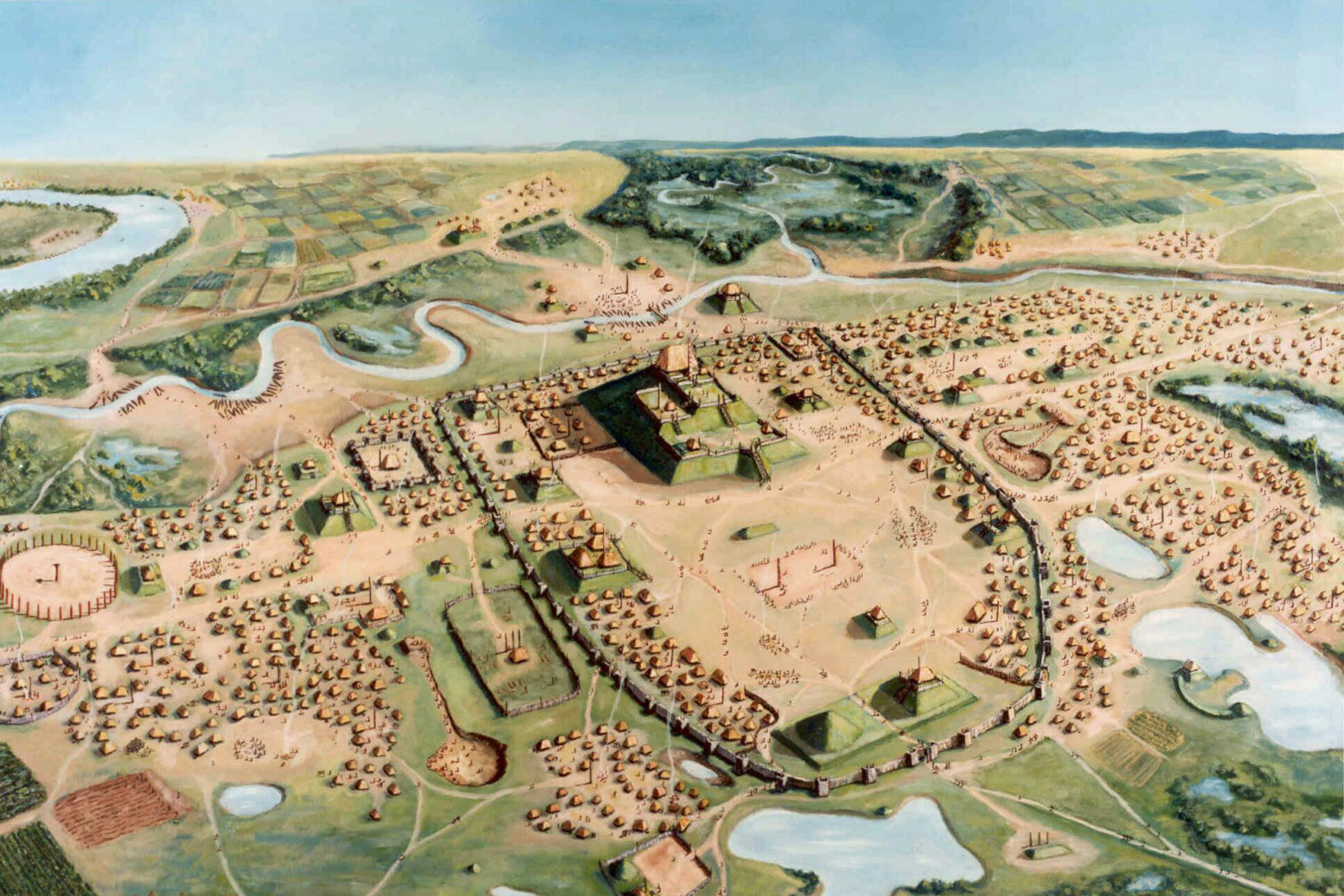 Meanwhile, in the American Southwest sometime between the years 900 and 1300 ancient Puebloan peoples built a large civilization sustained by advanced irrigation and a vast trading network linking goods from as far as Central Mexico and the Mississippi River. As many as 15,000 people lived in the Chaco Canyon complex in present-day New Mexico. One single building, Pueblo Bonito, rose five stories and contained over 600 rooms. (Not until the late-nineteenth century would another American building surpass it in sheer size.) It and other ancient adobe cliff dwellings persist as ruins. Decline–likely brought on by sustained droughts, overpopulation, and soil exhaustion–shattered the large Pueblo cities although Puebloan peoples persisted in New Mexico and would later resist the highpoint of Spain’s North American expansion.

In the Pacific Northwest, Indian peoples including the Kwaikiutis, Tlingits, and Haidas took advantage of the lush forests and many rivers. The abundance of large forest mammals including deerk, elk, moose, and caribou, as well as waters filled with salmon, halibut, sturgeon and others created a tremendous surplus of food. Massive ocean-sailing canoes, some over 50 feet in length, enabled extensive fishing expeditions. The food surplus enabled a unique social organization, where individuals achieved social status by giving elaborate feasts, called potlaches. These days-long parties allowed the host to demonstrate his wealth by feeding and entertaining guests with food and artwork. Elaborately carved totem poles, masks, and other wooden items carved out of the great trees of the region produced some of the world’s most unique art. 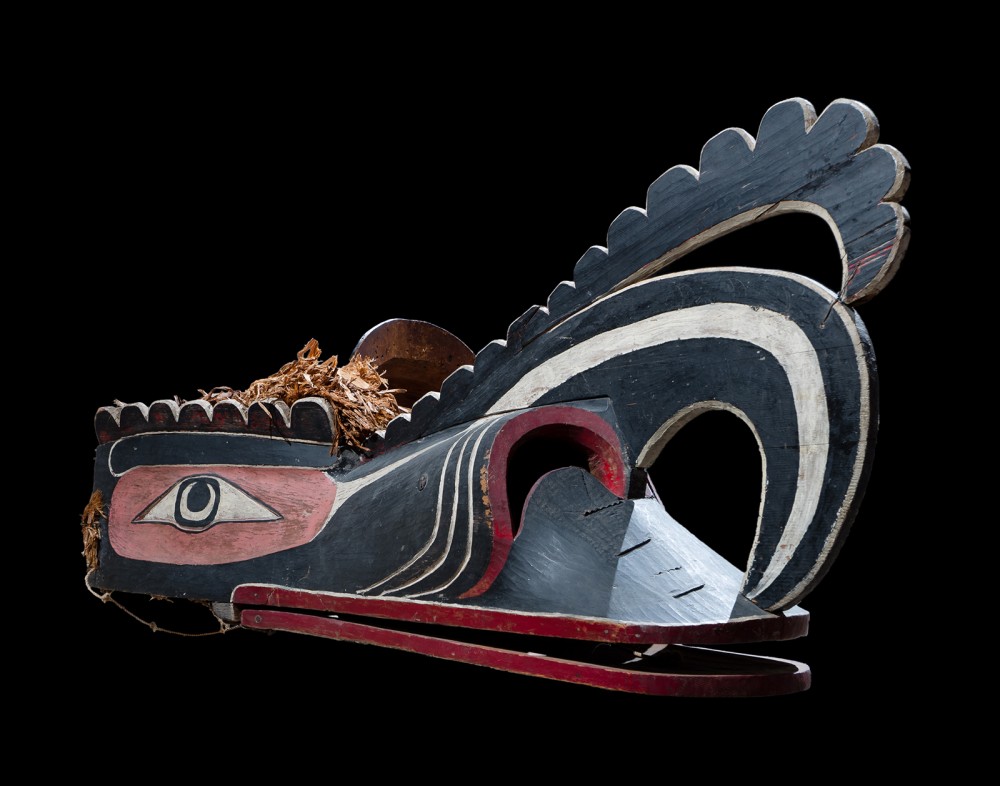 Despite their many differences, North America’s indigenous peoples shared some broad traits. Spiritual practices, beliefs on property, and kinship networks differed markedly from Europeans. Most Native Americans did not neatly distinguish between the natural and the supernatural. Spiritual power permeated their world and was both tangible and accessible. It could be appealed to and harnessed. Moreover, most native peoples’ notions of property rights differed markedly from Europeans. Native Americans generally felt a personal ownership of tools, weapons, or other items that were actively used. The same rule applied to land and crops. While groups and individuals exploited particular pieces of land, for instance, and through violence or negotiation would exclude others, the right to the use of land did not imply the right to permanent possession. Meanwhile, kinship bound most native North American people together. Most North American native peoples lived in small communities tied by kinship networks. Native cultures understood ancestry as matrilineal: family and clan identity proceeded along the female line, through mothers and daughters, rather than fathers and sons. Fathers, for instance, would often join mothers’ extended families and sometimes even a mother’s brothers would take a more direct role in child-raising than biological fathers. Mothers could therefore often wield enormous influence at local levels and native men's identities and influence were often forged in such matrilineal contexts. Native American culture meanwhile generally afforded greater sexual and marital freedom. Women often chose their husbands, and divorce often was a relatively simple and straightforward process.

Despite commonalities, native cultures varied greatly. From massive empires to scattered nomads, from agriculturalists to hunter-gatherers, the New World was marked by diversity and contrast. By the time Europeans were poised to cross the Atlantic, Native Americans spoke hundreds of languages and had adapted their lives to the hemisphere’s many climates. Some lived in cities, others in small bands. Some migrated seasonally, others settled permanently. Native peoples had long histories and well-formed unique cultures that developed and evolved over millennia. But the arrival of Europeans changed everything.