The Origins of Patriarchy

Patriarchy is a social structure in which men are considered to have a monopoly on power and women are expected to submit.

The origins of patriarchy are closely related to the concept of gender roles, or the set of social and behavioral norms that are considered to be socially appropriate for individuals of a specific sex. Much work has been devoted to understanding why women are typically thought to inhabit a domestic role while men are expected to seek professional satisfaction outside of the home. This division of labor is frequently mapped onto a social hierarchy in which males' freedom to venture outside of the home and presumed control over women is perceived as superior and dominant. As such, rather than working to destabilize the historical notion of patriarchy, much literature assess the origins of patriarchy or a social system in which the male gender role acts as the primary authority figure central to social organization, and where fathers hold authority over women, children, and property. It implies the institutions of male rule and privilege and entails female subordination.

Though less popular in modern academic circles, there has been a traditional search for biological explanations of gender roles. Before the nineteenth century, this conversation was primarily theological and deemed patriarchy to be the "natural order. " This took on a biological trope with Charles Darwin's ideas about evolution in The Origin of Species. In this work, Darwin explained evolution from the biological understanding that is now the accepted scientific theory. Biologists such as Alfred Russel Wallace quickly applied his theory to mankind. To be clear, though, the line of thought called Social Darwinism, or the application of evolutionary principles to the development of human beings and our social practices, was never promoted by Darwin himself. With the popularization of the idea of human evolution, what had previously been explained as a "natural order" for the world morphed into a "biological order. "

The modern term for using biological explanations to explain social phenomena is sociobiology. Sociobiologists use genetics to explain social life, including gender roles. According to the sociobiologists, patriarchy arises more as a result of inherent biology than social conditioning. One such contemporary sociobiologist is Steven Goldberg, who, until retirement, was a sociologist at the City College of New York. In 1973, Goldberg published The Inevitability of Patriarchy, which advanced a biological interpretation of male dominance. Goldberg argued that male dominance is a human universal as a result of our biological makeup. One evolutionary sociobiological theory for the origin of patriarchy begins with the view that females almost always invest more energy into producing offspring than males and, as a result, females are a resource over which males compete. This theory is called Bateman's principle. One important female preference in selecting a mate is which males control more resources to assist her and her offspring. This, in turn, causes a selection pressure on men to be competitive and succeed in gaining resources in order to compete with other men. 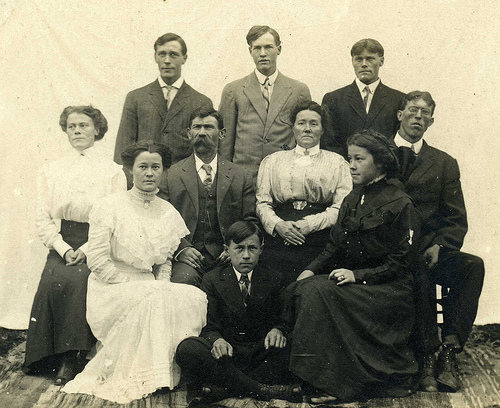 A Family Portrait from the early 1900s

In a patriarchal family, the male acts as the primary authority figure.