In this context, development refers to “change directed toward improving human welfare” (Miller 2011: 260). What this definition fails to mention is that the change is based on a model developed by former colonial powers the result of which is “dislocated cultural space” (Inda and Rosaldo 2002:25). While western culture has historically taken precedence through the process of colonialism in more recent years that dominance has been challenged resulting in interconnected cultural space (Inda and Rosaldo 2002:26).

Post WWII, development focused on rebuilding countries devastated by the global conflict. Impacting the course of development were two polarizing social ideologies: communism and democracy. Much of the economic and political development pursued by the United States was geared toward stopping the spread of communism. The goal was to help underdeveloped countries, or countries that did not economically use all their available resources to the degree deemed appropriate by the former colonial powers, become modern. The assumption was that all countries were on a universal path to modernity, an idea straight out of eighteenth century philosophies like social evolution (see theories section from the beginning of the quarter) and Social Darwinism. Several institutions were started to aid in development, particularly on the economic level: United Nations (UN), World Bank (WB), and International Monetary Fund (IMF).

The UN was chartered in 1945 with fifty-one countries as original members. The UN and its family of organizations work to promote respect for human rights, protect the environment, fight disease, foster development, and reduce poverty. It oversees progress and works to foster cooperation among nations. The UN has also become a “neutral” peacekeeper in more recent years, but it is totally dependent upon member nations to provide military and financial resources to fulfill its mission. The UN currently has 193 member states each of which has a single vote in the General Assembly. The UN Security Council, which is responsible for overseeing international peace and security, has fifteen members: five permanent members (China, France, Russian Federation, United Kingdom, and United States) and ten non-permanent members who are elected for a term of two-years by the General Assembly. Any nation can take part in discussions of the Security Council, but only the fifteen members have a vote. A student of history might recognize that the five permanent members of the Security Council were allies during WWII and represent the two post-WWII social ideologies mentioned above. 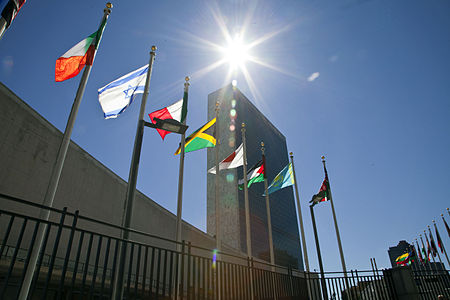 At the same time that the UN was being organized, it was decided that an international banking system was integral to reconstruct the post-war world economy. In July 1944 at Bretton Woods, NH, a conference of forty-four financial ministers from Allied nations met to discuss the rebuilding of the world economy. The United States encouraged the foundation of the “twin sisters” – the World Bank and International Monetary Fund. The WB focused on making loans to governments in order to rebuild railroads, highways, bridges, ports, and other infrastructures. Its initial focus would be on rebuilding Western Europe and Japan, and then the focus would shift to the underdeveloped world. In 2015, the WB had 188 member countries, or shareholders, each of which is required to be a member of the IMF as well. Those members with the largest shares tend to have more influence in both institutions. The IMF’s initial goal was to stabilize international currency exchange. In 2012, the IMF’s mandate was modified to include economic and financial issues related to global stability.

The WB and IMF come under harsh criticism for their lending practices. In order to borrow money from the IMF or WB, debtor countries must agree to implement structural adjustment policies “…ensure open market access for corporations while cutting social spending on programs such as education, health care, and production credits for poor farmers” (Global Exchange 2011). Debtor countries must also privatize publicly owned utilities and industries. Critics claim that the institutions are setting social and economic policy without representation by elected representatives.

Why was all this control deemed necessary? Walt Rostow, a preeminent development economist remarked in 1956 that the natural resources located in underdeveloped nations should be kept safe from Communist control in order for the United States, Western Europe, and Japan to maintain their way of life.

Since the end of WWII, models of development have changed based on political, economic, and social needs. The earliest development models were developed using several assumptions:

Modernization Model: This model is focused on change through economic growth. It is the basic model outlined above in the background information on the World Bank and International Monetary Fund. Material progress through industrialization, market expansion, and technological innovation are key components as is a democratic political system with consolidated power vested in the state. Material progress would result in better lives for the citizenry even if the environment and society suffered. Critics of this cookie-cutter approach to development claim that it is not sustainable because of the high consumption levels of resources. Anthropological research indicates that this model is detrimental to indigenous peoples as their land and resources are subsumed by the state and sold or leased to corporations for resource extraction, leading to destruction of their cultures. This model also encourages reduction in both cultural and bio-diversity (Miller 2011). See Optional: Further Reading for information on specific studies.

Growth-Oriented Development Model: Drawing on the modernization model and Rostow’s stages of growth theory (see Rostow's Theory of Modernization Development https://www.academia.edu/3596310/Rostows_theory_of_modernization_development), the growth-oriented development model proposes that a trickle-down effect will occur when there is investment in economic growth. As wealth increases for those investing in economic growth, some of the wealth will make its way down to those less well off thereby positively impacting human welfare. Participation in the international market and industrialization of both agriculture and manufacturing are key elements. Privatization of public services is also imperative. This may be familiar as these ideas are incorporated in the World Bank and IMF structural adjustment policies (Miller 2011). One of the criticisms of this model is that it ignores the fact that “underdeveloped nations” did not have a history of development. Such is not the case. Many indigenous societies had well-established trade with other groups both close by and long distance. There were also lucrative indigenous industries such as the Indian textile industry mentioned previously. This model concentrates resources into the hands of the few, creating marked inequality in society. Recent research and criticism focuses on the unsustainability of this model of development.

Human Development Model: In this model, the focus is on investment in human welfare, better education, health care, security, and safety, with the belief that it will lead to economic growth (Miller 2011).

Sustainable Development Model: Probably the most recent development model, sustainable development focuses on the conservation of non-renewable resources and, in some cases, survival of indigenous peoples. This model also proposes investment in development projects that are financially sustainable over time. 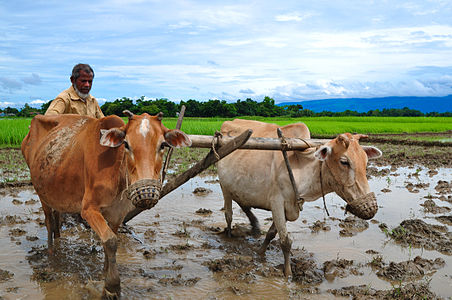 What is clear is that the development projects that work best are socially compatible and recognize that the economy is part of a culture and not a separate entity. Culture fit or the practice of “…taking the local culture into account in project design” (Miller 2011: 369) is at the heart of a development project failure in rural Bangladesh. A farming cooperative program with support from the government was begun with adult males, ignoring the traditional role of women in farming practices (male bias in development is common) and requiring the use of crop seeds, fertilizers and pesticides. Over time, the pesticides entered the food chain through seepage into local rivers and streams, which then were absorbed by fish and eventually people, causing an increase in birth defects. The local people noticed that their livestock became sick and died after the increased use of pesticides for farming. The people rejected the development program after some years and returned to their traditional ways of organic farming, sparking a “new agricultural” movement, Nayakrishi, with the help of the Center for Development Alternatives, a non-governmental organization based in Dhaka, the capital of Bangladesh (McKibben 2001). Since the Nayakrishi began over 300,000 Bengali families have returned to organic farming and development projects focused on culture fit like that of Hunger Free World (http://www.hungerfree.net/english/whatdo/bangladesh/lcbd.html ) have been successful. 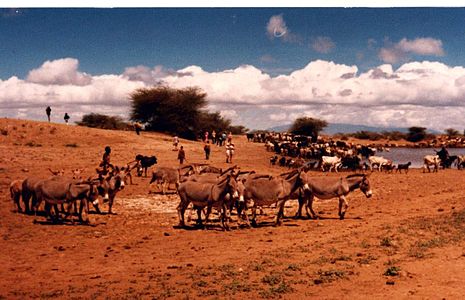 In East Africa, the World Bank sponsored an irrigation and settlement project geared to transform local pastoralists into small-scale sedentary farmers. Pastoralists were expected to simply abandon their traditional way of life and their territory turned over to new commercial farms. While this would have benefitted the commercial farmers it required the pastoralists to work “…three times harder growing rice and picking cotton for the bosses,” a case of overinnovation (Kottak 1990: 725). This project failed and was canceled and redesigned. World Bank projects in South Asia, South America, the Middle East, and West Africa also failed when culture fit was not considered. Unfortunately, there are numerous development projects that result in the loss of land and resources for local, indigenous populations; from hydroelectric dams and logging (Kayapo, Amazon rainforest) to fish-processing factories in pastoral areas of Kenya and international trade agreements like the North American Free Trade Agreement - NAFTA (Zapatista, Mexico), traditional lifeways are at risk due to development aggression, the “imposition of development projects and policies without the free, prior, and informed consent of the affected people (Miller 2011: 377).

…[anthropology provides] the analytical means to understand the heterogeneity of loca/ actors and their interests, to see the multiple links in their social lives and appreciate their everyday strategies, to tap into local understandings and comprehend resistance to perceived outside interference (Sillitoe 2007: 154 quoted in O’Driscoll 2009: 17).

While anthropology might not have a monopoly on insight into multidisciplinary approaches or insight into the benefits of including indigenous knowledge, it is at the forefront of anthropological approaches. Involvement in development projects may create an ethical dilemma for anthropologists, as the tenet that is drilled into every anthropology student’s head is not to change the cultures we study and to do no harm. As outlined above there are development projects that do not help people in the way that the planners envision. Frankly, it is not uncommon for the interests of development planners and local peoples to conflict. Some argue that it is imperative for anthropologist to be involved in development discourse to work with local people to help them assess their needs and ideas for change or to even advocate for localized, community-specific initiatives. Some anthropologists suggest that we should not be involved with international development agencies, but only with indigenous rights movements. Still others suggest that anthropologists study both small and large development institutions in order to better understand the development system. Anthropological data can help development projects maximize social and economic benefits by ensuring projects are a cultural fit, respond to local needs, involve the appropriate local social actors and organizations in the project, and are flexible (Gezen and Kottak 2014).

Dentan, Robert Knox, Kirk Endicott, Alberto G. Gomes, and M. B. Hooker. Malaysia and the “Original People”: A Case of Study of the Impact of Development on Indigenous Peoples. Boston: Allyn and Bacon, 1997.

Suggs, David N. A Bagful of Locusts and the Baboon Woman: Constructions of Gender, Change, and Continuitu in Botswana. Fort Worth, TX: Harcourt College Publishers, 2002.

International Monetary Fund. “About the IMF.” Accessed May 4, 2015. http://www.imf.org/external/about.htm.

SUMMARY OF MODERN PERSPECTIVES IN DEVELOPMENT.pdf