Growing up in any culture, all humans go through the process of enculturation. This process is the way in which we obtain and transmit culture. It describes how each individual comes to terms with the already set ideals that their culture has established, and how each person adapts to prohibited behaviors and beliefs, which are 'proscribed', versus encouraged behaviors and beliefs, which are 'prescribed'.

Parents and other authority figures in young children’s lives are usually the initiators of this process, steering the children toward activities and beliefs that will be socially accepted in their culture. Through this process these authority figures definitely shape the child’s view on life. Enculturation results in the interpretation of these ideals established by our culture and the establishment of our own individual behaviors and beliefs. 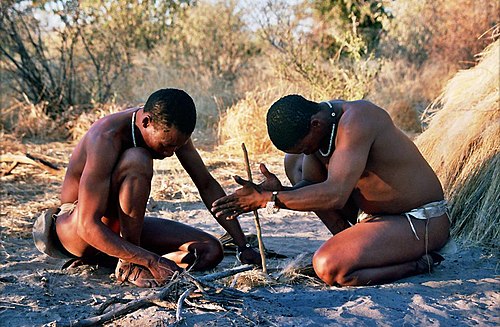 The !Kung People diligently work on making a fire

For example the !Kung Bushman who live in the Kalahari were raised quite differently than someone who grew up in Washington State,or the States in general. In the United States, we tend to tolerate arrogance more so than the !Kung people.[5] For example, when we give people gifts and they thank us graciously for it, we acknowledge their acceptance by saying "It was no big deal", which by accepting their gratitude makes us in a way arrogant because we accept the fact the receiver appreciates the gift. Growing up in another culture, there are different guidelines that people have to follow in order to be socially accepted. In the !Kung Bushman tribe they look down upon people who think highly of themselves and who are arrogant. To avoid these characteristics, each child was raised to put down and mock others when they do things such as hunting and other activities. Their view is that by telling someone who had just hunted a huge ox, that the ox is a “bag of bones” or “thin, sick, and dead,” then they are preventing this person from being arrogant and full of them self.

In contrast, enculturation in the United States teaches people to see this behavior as mean and wrong. Often in the United States culture arrogance is also viewed as a negative quality, but it is not discouraged in the same way. A common way members of the United States culture discourage displays of arrogance is simply by telling the younger generation that it is a bad quality. The !Kung people use enculturation strongly to impress their cultural value of humility; in United States culture, it is emphasized less and it shows in the much wider acceptance of arrogance. In the US, a hunter might have been praised for doing good things such as hunting large game and providing food for everyone else. All of the members of these two cultures went through the process of enculturation but just into different cultures with different established ideals. 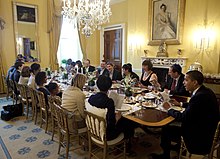 Barack Obama shows multi-cultural respect by hosting a Sedar dinner. Sedar is a Jewish tradition passed down through families for generations.

Cultural Transmission is the passing of new knowledge and traditions of culture from one generation to the next, as well as cross-culturally. Cultural Transmission happens everyday, all the time, without any concept of when or where. Everything people do and say provides cultural transmission in all aspects of life. In everyday life, the most common way cultural norms are transmitted is within each individuals' home life. Each family has its own, distinct culture under the big picture of each given society and/or nation. With every family, there are traditions that are kept alive. The way each family acts, communicates with others and an overall view of life are passed down. Parents teach their kids everyday how to behave and act by their actions alone.

Another big influence on cultural transmission is the media. The distinct way the media portrays America to other countries and themselves. One example is the way that hip-hop has formed all over the world, each with its own distinct way of interpretation formed by any such culture. Each, separate translation of the meaning of hip-hop is an example of cultural transmission, passed from one culture to the next. In Japanese culture, hip-hop[6] for instance, has become quite a popular aspect as more of an underground scene and has made its own concepts of what hip-hop is, but still has similar characteristics of original hip-hop. Cultural transmission cross culturally happens very easily now with Globalization. For example, hip-hop is not just music; it’s a lifestyle, an image, and a culture of its own. Cultural transmission is what keeps cultures alive and thriving.

Dakar, the capitol of Senegal located in Western Africa, has also seen its media become influenced through cultural transmission and Hip-Hop. As shown in the film "Democracy in Dakar," Dakar's 2007 elections were heavily influenced by underground Hip-Hop. The documentary shows how the youth of Dakar have used their musical talents to encourage everyone to vote, in an attempt to void the corruption present within the government. [7]