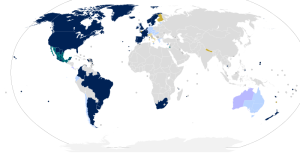 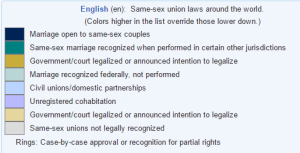 Same-sex union laws around the world.

Monogamy, the union between two individuals, is the most common form of marriage. While monogamy traditionally referred to the union of one man and one woman, there are some countries that recognize same-sex unions. As of early 2015, The Netherlands, Spain, Canada, South Africa, Norway, Sweden, Portugal, Iceland, Argentina, Denmark, Brazil, France, Uruguay, New Zealand, the United Kingdom, Luxembourg, and Finland legally allow same-sex marriage. In other countries, the debate continues over whether or not to legalize same-sex marriage or guarantee rights to homosexuals. For instance, certain states in Mexico allow same-sex marriage, but not the entire nation. Serial monogamy, where an individual has multiple spouses over their lifetime, but only one at a time, is quite common in industrial societies.

Polygamy, the union between three or more individuals is the second most common form of marriage. Generally when polygamy is mentioned by the media, a marriage between a man and multiple women is being referenced; however, the term is being misused. Polygyny is the correct term for a marriage between a man and multiple women. Polyandry refers to a marriage between a woman and multiple men. Polyandry mostly occurs between a woman and brothers, a system referred to as fraternal polyandry. One reason that polyandry might be the preferred marriage pattern for a group is if there is a shortage of women or land is scarce. For instance, the Nyinba of Nepal practice fraternal polyandry because there is not enough land to divide between brothers and the high mortality rate of female child and infant mortality. Male children are preferred, therefore are better cared for then female offspring (Bonvillain 2010: 218-219).

Polygyny is more common than polyandry. It is generally found in societies where rapid population growth is beneficial to the survival of the group, such as frontier and warrior societies, or where the ratio of women to men is high. Men with multiple wives and many children usually have higher status within the group because they have demonstrated that they can afford to support a large family. Men may also marry several women to help increase his wealth as he will then have more hands helping to bring in resources to the family. Many groups across the globe have or do practice polygyny, e.g., G/wi, Australian Aborigines, Turkana, Samburu, and the Tswana.

A question that anthropologists asked was what are the benefits of multiple spouses? What they found were several possible benefits:

There are a few other types of marriage. A symbolic marriage is one that does not establish economic or social ties, e.g., a Catholic nun marrying Jesus Christ. Fixed-term marriages are temporary marriages that are entered into for a fixed period of time. Once the time period is ended, the parties go their separate ways. There may be a financial gain for the woman, however there are no social ties once the marriage has ended. Fixed-term marriages legitimize sexual relationships for individuals whose culture may forbid sexual relationships outside of marriage, e.g., soldiers during times of war or students attending college in a foreign country.

Some cultures have developed special rules for marriage if a married family member dies. The levirate obliges a man to marry his deceased brother's wife; e.g., Orthodox Judaism (although rarely practiced today, the widow must perform the chalitzah ceremony before she can remarry). The brother is then responsible for his brother's widow and children. This helps keep the children and other resources the deceased had collected within the family. The sororate is the flip side of the levirate. In this system, a woman must marry the husband of her deceased sister. The Nuer practice a form of the levirate called ghost marriage. If an elder brother dies without fathering children, one of his younger brothers must marry his widow. Children resulting from the ghost marriage are considered the offspring of the deceased brother (Bonvillain 2010).

1 What is Cultural Anthropology

Form and function are important concepts in cultural anthropology.docx