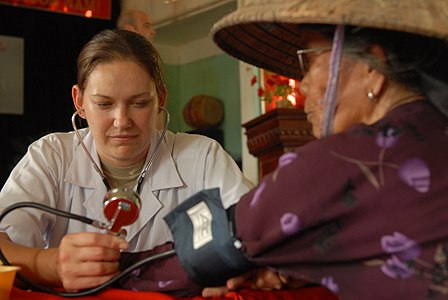 The U.S. Army - MEDRETE in the Bac Ninh Province of Vietnam.

In order to understand the anthropological approach to health and illness, it is necessary to know the definitions of terms related to the topics.

All definitions of health are imbued with moral, ethical, and political implications. Perhaps the broadest definition of health is that proposed by the World Health Organization (WHO), defining health with reference to an “overall sense of well-being.” By WHO’s criteria, only a relatively small percentage of the world’s population could be classified as healthy (Glazier and Hallin 2010: 925).

Disease and illness are separate concepts. Disease is a condition caused by a pathogen, e.g., bacterium, parasite, or virus, which has been scientifically verified; it is something that can be objectively measured. These can vary by group (e.g., ethnicity and socioeconomic status), geography, incidence, and severity. Illness is a feeling or perception of not being healthy. Illness may be caused by disease, but it can also be caused by psychological or spiritual factors and tied to an individual’s worldview. Health systems include cultural perceptions and classification of health-related issues, healing practices, diagnosis, prevention, and healers (Miller 2011).

All people try to understand the cause of illness and disease. The cross-cultural study of specific causal explanations for health-related problems is called ethno-etiology. Ethno-etiological studies of migraines demonstrate that in the Bahia area of Brazil, migraines the causal explanation of migraines is certain types of winds. In the U.S., biomedical explanations for migraines include emotional stress, sensitivity to certain chemicals and preservatives in food, excessive caffeine, menstrual periods, skipping meals, changes in sleep patterns, excessive fatigue, changing weather conditions, and numerous medical conditions such as hypertension, asthma, and chronic fatigue syndrome.

Structural suffering, or social suffering resulting from poverty, famine, conflict, and forced migration, is a focus of ethnomedicine and medical anthropology in general. Frequently, structural suffering is related to culture-bound syndromes, which are psychopathologies (suite of signs and symptoms) restricted to certain cultural environments. Witiko is a culture-bound syndrome found among indigenous peoples of Canada. The symptoms include an aversion to food accompanied by depression and anxiety. The witiko spirit, which is a giant human-eating monster, eventually possesses the inflicted individual causing the person to acts of cannibalism and homicide. Studies indicate that witiko is an extreme form of starvation anxiety (Martin 2012). Other examples of culture-bound syndromes that are not necessarily to structural suffering include:

In the Western biomedical approach to healing, private healing is the norm; oftentimes only the patient and the professional health practitioner(s) is/are in the room. In other health systems community healing or humoral healing are common. The community healing approach considers social context critical for the healing process. Healing practices take place in front of the whole community and often involve their participation. One example is the healing dance of Ju/hoansi foragers of the Kalahari. Several times a month, the healing dance is performed to draw on the collective energy of the participants. Men, and sometimes women, dance around a circle of women who sit around a fire, clapping and singing. Healers draw on the spiritual energy of the dancers and singers to enhance their consciousness. During this period of enhanced consciousness, healers can heal those in need (Miller 2011).

Humoral healing systems use a philosophy centered on the idea that heat and coolness imbalances in the body cause disease. Coolness causes death in some Chinese, Indian, and Islamic cultures while in others such as the Orang Asli in Malaysia heat is the culprit. Food and drugs are used to offset these imbalances. 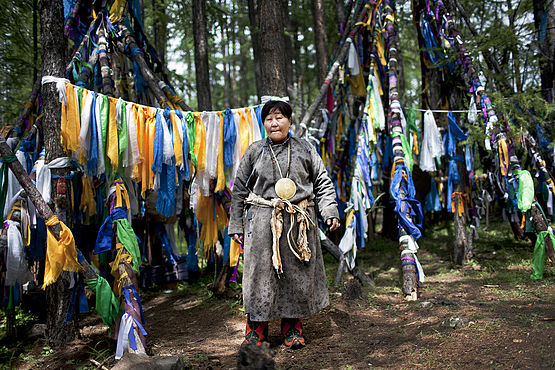 A Tsaatan shaman in northern Mongolia prepares for a ceremony. Khovsgol Province, Mongolia.

All healing specialists go through similar process to become specialists. First there is the selection process. In most cases, the candidate must show some aptitude. In an indigenous society it might be an ability to connect with the supernatural realm. In cultures reliant on the Western biomedical approach, candidates must past entry exams and academic courses to become specialists. Training from seasoned healing specialists is a key component for all those who wish to become healing specialist whether in the form of apprenticeship with a shaman to formal training in a medical school. Training can be arduous both physically and mentally no matter the type of training. Once training is complete, the candidate earns a medical degree in the Western biomedical system. In indigenous societies, initiation rituals are performed. Once this certification process is complete, the healing specialist can adopt the raiment of the professional healer, e.g., the white coat of the medical doctor. Payment is generally expected for services rendered. What constitutes payment is highly variable, from salaries to livestock.

Explore: Learn more about the anthropologists