Religious beliefs and rituals can be the catalyst or vehicle of social change. Most religions are syncretic; they borrow practices, beliefs and organizational characteristics from other religions. Sometimes this is done voluntarily and at other times it is done by force. For instance, Catholicism through the practice of forced conversion during the period of European colonialism influenced other religions. Vodoun borrowed heavily from Catholicism. The one god is manifested in Bondye while St. Patrick is symbolized by Vodoun's rainbow serpent deity, Ochumare. Oftentimes special days are adopted by religions. Catholicism adopted Yule, the winter solstice celebration of Pagans, to celebrate the birth of Jesus Christ. The Zuni merged their native religion with Catholicism, incorporating images of Christ into their cloths and jewelry.

Revitalization movements are frequently associated with religion. They often occur in disorganized societies due to warfare, revolutions, etc. They usually call for the destruction of existing social institutions in order to resolve conflict and stabilize the culture through reorganization. Most recorded revitalization movements were an adaptive response to rapidly changing social and economic circumstances brought on by contact with an outside culture.

The cargo cults of Melanesia are one example of movements that make a conscious effort to build an ideology that will be relevant to changing cultural needs. Cargo cults arose in Melanesia and other areas of the world after European contact in response to “...the expropriation of native land, and the relegation of indigenous peoples to roles as menial laborers and second-class citizens” (Bonvillain 2010: 374). Rituals were performed in the belief that they would result in increased wealth and prosperity in line with the European idea of material wealth. 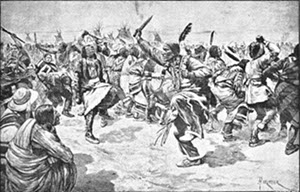 Another example of a revitalization movement is the Ghost Dance that swept through western Native American cultures from 1870-1890. The Ghost Dance was begun by a Pauite, Wovoka. Wovoka claimed to have a vision from God during eclipse. In this vision, he was brought before God and given message for people of earth about peace and right living. He was shown the circle dance, that represented the movement of harmony around sun. Wovoka prophesied that dead Indian forebears would return soon to take possession of technology of the whites, who would simultaneously be exterminated in a huge explosion, resulting in a renewal of earth. Many Native American nations rallied to the Ghost Dance; e.g., Lakota, Ute, Washoe, Shoshone, Cheyenne, Arapaho, Kiowa, Mandan, and Comanche. However, during the process of learning about the Ghost Dance from Wovoka, some of the new adherents changed its meaning and intent. The Lakota were one group who changed some of the meaning of the Ghost Dance.
The Lakota had suffered greatly at hands of US Army. Their lands were taken away by miners, the railroads were given rights to build through the reservations, and traditional hunting grounds were being settled by farmers. One Lakota warrior, Kicking Bear, visited Wovoka, and returned to his people with the message of the Ghost Dance, but he injected militancy into it. He claimed that if the people wore a special costume for the dance, one that included eagle feathers, the dancer would be impervious to the white man's bullets. The Ghost Dance made the United States government nervous and in November 1890 sent thousands of troops onto the Pine Ridge and Rosebud reservations. Sitting Bull, one of the Lakota peace chiefs was arrested and subsequently murdered.
Meanwhile another peace chief, Big Foot was encamped with his people along Wounded Knee Creek. On December 28, 1890, soldiers showed up at camp to confiscate weapons in response to the Ghost Dance. One Lakotan man who was deaf and did not understand what the army was doing struggled to keep his gun, which went off in the melee. This caused the soldiers to open fire on the camp of mainly elders, women and children. The resulting massacre left 153 Lakotans dead, mostly women and children. Twenty-five soldiers were killed as well, most by friendly fire, all of whom were posthumously awarded medals of honor.