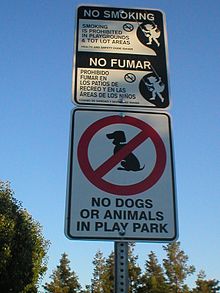 Signs warning of prohibited activities; an example of a social control.

Social control is a concept within the disciplines of the social sciences and within political science.[1]

As briefly defined above, the means to enforce social control can be either informal or formal.[3] Sociologist Edward A. Ross argues that belief systems exert a greater control on human behavior than laws imposed by government, no matter what form the beliefs take.[4]

Social control is considered to be one of the foundations of order within society.[5]

Definition of the concept

Roodenburg identifies the concept of social control as a classical concept.[6]

While the concept of social control has been around since the formation of organized sociology, the meaning has been altered over time. Originally, the concept simply referred to society's ability to regulate itself.[7] However, in the 1930s, the term took on its more modern meaning of an individual's conversion to conformity.[7] Social control theory began to be studied as a separate field in the early 20th century.

The social values present in individuals are products of informal social control, exercised implicitly by a society through particular customs, norms, and mores. Individuals internalize the values of their society, whether conscious or not of the indoctrination. Traditional society relies mostly on informal social control embedded in its customary culture to socialize its members.

Informal sanctions check 'deviant' behavior. An example of a negative sanction comes from a scene in the Pink Floyd film 'The Wall,' whereby the young protagonist is ridiculed and verbally abused by a high school teacher for writing poetry in a mathematics class. Another example from the movie 'About a Boy', when a young boy hesitates to jump from a high springboard and is ridiculed for his fear. Though he eventually jumps, his behaviour is controlled by shame.[8]

Informal controls reward or punish acceptable or unacceptable behaviour (i.e., deviance) and are varied from individual to individual, group to group, and society to society. For example, at a Women's Institute meeting, a disapproving look might convey the message that it is inappropriate to flirt with the minister. In a criminal gang, on the other hand, a stronger sanction applies in the case of someone threatening to inform to the police of illegal activity.[9]

Theoretical bias within the modern media

Theorists such as Noam Chomsky have argued that systemic bias exists in the modern media.[10]The marketing, advertising, and public relations industries have thus been said to utilize mass communications to aid the interests of certain political and business elites. Powerful ideological, economic and religious lobbyists have often used school systems and centralised electronic communications to influence public opinion.

Social control developed together with civilization, as a rational measure against the uncontrollable forces of nature, which tribal organisations were at prey to, within archaic tribal societies.[11]

Rulers have legitimately used torture as a means of mind control as well as murder, imprisonment and exile to remove from public space anyone the state authorities deemed to be undesirable.

During the Age of Enlightenment harsh penalties for crimes and civil disobedience were criticised by philosophers such as Cesare Beccaria and Jeremy Bentham whose work inspired reform movements which eventually led to the Universal Declaration of Human Rights in 1948 which informs most western jurisdictions and the similar Cairo Declaration on Human Rights in Islam in 1990.

The word crime became part of the vocabulary of the English language via Old French, during the Middle Ages, and within the Middle English of the language.[12]

In history, religion was a factor which provided moral influence on the community and each person, providing an internal locus of control oriented toward a morality, so that each person was empowered to have a degree of control over themselves within society. As Auguste Comte instituted sociology (1830-1842), already certain thinkers had predicted the discontinuation of a perceived false consciousness intrinsic to religious belief. Nevertheless, within the twentieth century, religion was presumed by social scientists to be still a principal factor of social control.[13]

Comte and those preceding him were breathing the air of a revolution which occurred during the latter parts of the eighteenth century (French Revolution) to bring about a so-called enlightened way of being in society, and which brought about a new liberty for the individual, without the constraints of an over-seeing aristocracy.[14]

In the context social control through penal and correctional services, the rehabilatative ideal (Francis Allen 1964) is an key idea formed within the 20th century, the first principle of which is behavior has as a first cause, things which happened before ("Human behaviour is a product of antecedent causes").[15] The idea was later thought to have less relevancy to the philosophy and exaction or execution of correctional measures, at least according to a 2007 publication (and elsewhere).[16]

Law is a technique used for the purposes of social control.[17]

A mechanism of social control occurs through the use of selective incentives.[18] Selective incentives are private goods,[19] which are gifts or services,[20] made available to people depending on whether they do or don't contribute to the good of a group, collective, or the common good. If people do contribute, they are rewarded, if they don't they are punished. Mancur Olson gave rise to the concept in its first instance (c.f. The Logic of Collective Action ).[19]

Oberschall, in his work, identifies three elements to the pragmatics of social control as they exist in our current society. These are, confrontational control, such as riot control and crowd control, preventative measures to deter non-normal behaviours, which is legislation outlining expected boundaries for behaviour, and measures complementary to preventative measures, which amount to punishment of criminal offences.[21]

Park exclusion orders (prohibiting individuals from frequenting one, some, or all of the parks in a city for an extended period of time due to a previous infraction), trespass laws (privatizing areas generally thought of as public in order for the police to choose which individuals to interrogate), and off-limit orders (Stay Out of Drug Areas (SODA) and Stay Out of Areas of Prostitution (SOAP) which obstructs access to these spaces) are just a few of the new social control techniques employed by cities to displace certain individuals to the margins of society.[22] Several common themes are apparent in each of these control mechanisms. The first is the ability to spatially constrain individuals in their own city. Defying any of the above statutes is a criminal offense resulting in possible incarceration.[22] Although not all individuals subjected to an exclusion order will abide to it, these individuals are, at the very least, spatially hindered through decreased mobility and freedom throughout the city.[23] This spatial constrain on individuals leads to a serious disruption and interference of their lives. Homeless individuals generally frequent parks since the area provides benches for sleeping, public washrooms, occasional public services, and an overall sense of security by being near others in similar conditions. Privatizing areas such as libraries, public transportation systems, college campuses, and commercial establishments that are generally public gives the police permission to remove individuals as they see fit, even if the individual has ethical intent in the space. Off-limit orders attempting to keep drug addicts, prostitutes, and others out of concentrated areas of drug and sex crimes commonly restricts these individuals' ability to seek social services beneficial to rehabilitation, since these services are often located within the SODA and SOAP territories.[23]

In the USA, early societies were able to easily expel individual deemed undesirable from public space through vagrancy laws and other forms of banishment. In the 1960s and 1970s, however, these exclusion orders were denounced as unconstitutional in America[24] and consequently were rejected by the US Supreme Court.[22] The introduction of broken windows theory in the 1980s generated a dramatic transformation in the concepts used in forming policies in order to circumvent the previous issue of unconstitutionality.[25] According to the theory, the environment of a particular space signals its health to the public, including to potential vandals. By maintaining an organized environment, individuals are dissuaded from causing disarray in that particular location. However, environments filled with disorder, such as broken windows or graffiti, indicate an inability for the neighborhood to supervise itself, therefore leading to an increase in criminal activity.[26] Instead of focusing on the built environment, policies substantiated by the Broken Windows Theory overwhelmingly emphasize undesirable human behavior as the environmental disorder prompting further crime.[22] The civility laws, originating in the late 1980s and early 1990s, provide an example of the usage of this latter aspect of the Broken Windows Theory as legitimization for discriminating against individuals considered disorderly in order to increase the sense of security in urban spaces.[24] These civility laws effectively criminalize activities considered undesirable, such as sitting or lying on sidewalks, sleeping in parks, urinating or drinking in public, and begging,[23] in an attempt to force the individuals doing these and other activities to relocate to the margins of society.[22] Not surprisingly then, these restrictions disproportionally affect the homeless.[22]

Individuals are deemed undesirable in urban space because they do not fit into social norms, which causes unease for many residents of certain neighborhoods.[27] This fear has been deepened by the Broken Windows Theory and exploited in policies seeking to remove undesirables from visible areas of society.[26] In the post-industrial city, concerned primarily with retail, tourism, and the service sector,[22] the increasing pressure to create the image of a livable and orderly city has no doubt aided in the most recent forms of social control.[24] These new techniques involve even more intense attempts to spatially expel certain individuals from urban space since the police are entrusted with considerably more power to investigate individuals, based on suspicion rather than on definite evidence of illicit actions.[23]

In the decades prior to the end of the 1980s, an increased prevalence of the individual as a feature within society has caused a high number of new therapists to be established suggesting the use of therapy as a means of social control. (Conrad & Scheider, 1980: Mechanic 1989) [28]