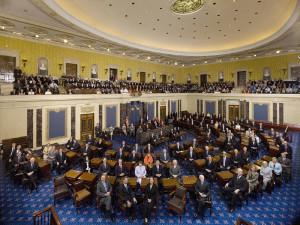 A class photo of the 110th United States Senate.

State-level societies are the most complex in terms of social, economic, and political organization, and have a formal government and social classes. States control or influence many areas of its members lives. From regulation of social relations like marriage to outlining the rights and obligations of its citizens, there is little in daily life that is not impacted. States have large populations and share the following characteristics:

States have power over their domain. They define citizenship and its rights and responsibilities. Inequality is the norm, with clear social classes defined. States monopolize the use of force and maintenance of law and order through laws, courts, and police. States maintain standing armies and police forces. They keep track of citizens in terms of number, age, gender, location, and wealth through census systems. They have the power to extract resources from citizens through taxes, which can be through cash such as the U. S. tax system or through labor such as the Incan mita system where people paid with their labor. States also have the ability to manipulate information.

States control population in numerous ways. They regulate marriage and adoption. They create administrative divisions, e.g., provinces, districts, counties, townships, that help to create loyalties and help to administer social services and organize law enforcement. They may foster geographic mobility and resettlement that breaks down the power of kin relationships and create divided loyalty, e.g., resettlement of Native Americans on reservations.

States often uses religious beliefs and symbols to maintain power. State leaders may claim to be a deity may conscript popular ideology for political purposes. Regalia may be used to create a sense of pageantry and authority.

Most states are hierarchical and patriarchal. There have been female leaders, e.g., Indira Gandhi (India), Golda Meir (Israel), Margaret Thatcher (Great Britain), and Benazir Bhutto (Pakistan), but no female-dominated states have been documented.

Social control is of key concern to state leadership and is maintained through the formal methods mentioned above and informal methods such as psychological manipulation. Hegemony is the internalization of a dominant ideology (Gezen and Kottak 2014: 116), which can happen through such things as the enculturation process and persuasion through media and propaganda. The social order then seems normal and natural. Resistance is quickly squashed through shaming, gossip, stigma, and use of formal enforcement and judiciary means.

The subsistence base of all states is intensive agriculture. The first states centered production on one major crop that could be produced in large quantities and was easily storable: wheat, rice, millet, barley, maize, and tubers (potato, manioc, yams). Wheat, rice, and maize still dominate production today.

Explore: Learn more about the anthropologists

Anthropology is the study of humankind.docx