The global digital divide describes global disparities, primarily between developed and developing countries, in regards to access to computing and information resources such as the Internet and the opportunities derived from such access.[64] As with a smaller unit of analysis, this gap describes an inequality that exists, referencing a global scale.

The Internet is expanding very quickly, and not all countries—especially developing countries—are able to keep up with the constant changes. The term "digital divide" doesn't necessarily mean that someone doesn’t have technology; it could mean that there is simply a difference in technology. These differences can refer to, for example, high-quality computers, fast Internet, technical assistance, or telephone services. The difference between all of these is also considered a gap. 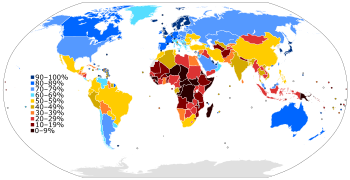 Internet users in 2012 as a percentage of a country's population. Source: International Telecommunications Union.[4] 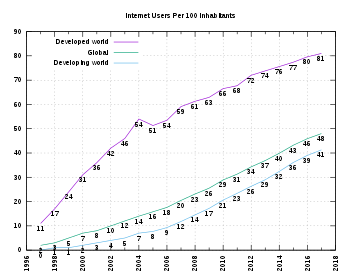 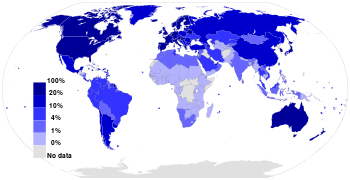 Fixed broadband Internet subscriptions in 2012 as a percentage of a country's population. Source: International Telecommunications Union.[62]

Mobile broadband Internet subscriptions in 2012 as a percentage of a country's population. Source: International Telecommunications Union.[63]

The global digital divide also contributes to the inequality of access to goods and services available through technology. Computers and the Internet provide users with improved education, which can lead to higher wages; the people living in nations with limited access are therefore disadvantaged.[65] This global divide is often characterized as falling along what is sometimes called the north-south divide of "northern" wealthier nations and "southern" poorer ones.

Some people argue that basic necessities need to be considered before achieving digital inclusion, such as an ample food supply and quality health care. Minimizing the global digital divide requires considering and addressing the following types of access:

Involves, "the distribution of ICT devices per capita…and land lines per thousands".[29]:306 Individuals need to obtain access to computers, landlines, and networks in order to access the Internet. This access barrier is also addressed in Article 21 of the Convention on the Rights of Persons with Disabilities by the United Nations.

Empirical tests have identified that several socio-demographic characteristics foster or limit ICT access and usage. Among different countries, educational levels and income are the most powerful explanatory variables, with age being a third one.[32][35] Others, like gender, don't seem to have much of an independent effect.[33]

In order to use computer technology, a certain level of information literacy is needed. Further challenges include information overload and the ability to find and use reliable information.

Computers need to be accessible to individuals with different learning and physical abilities including complying with Section 508 of the Rehabilitation Act as amended by the Workforce Investment Act of 1998 in the United States.[66]

In illustrating institutional access, Wilson states "the numbers of users are greatly affected by whether access is offered only through individual homes or whether it is offered through schools, community centers, religious institutions, cybercafés, or post offices, especially in poor countries where computer access at work or home is highly limited".[29]:303

Guillen & Suarez argue that that "democratic political regimes enable a faster growth of the Internet than authoritarian or totalitarian regimes".[28]:687 The Internet is considered a form of e-democracy and attempting to control what citizens can or cannot view is in contradiction to this. Recently situations in Iran and China have denied people the ability to access certain website and disseminate information. Iran has also prohibited the use of high-speed Internet in the country and has removed many satellite dishes in order to prevent the influence of western culture, such as music and television.[67]

Many experts claim that bridging the digital divide is not sufficient and that the images and language needed to be conveyed in a language and images that can be read across different cultural lines.[30]

Impact of the Global Digital Divide.docx

The Impact of the Global Digital Divide.docx

The Impact of the Global Digital Divide.edited.docx

Chapter 19 introduced the impact of the global digital divide. .docx

Question-1 The impact of the global digital divide. According.docx

ITS 832 •  University of the Cumberlands

BACHELOR I ARCHITECTU •  Technological University of the Philippines Manila

The Digital Divide in a Global Economy

The digital divide is a global societal issue and without the knowledge and skills of technology.doc