The key biologically relevant elements are hydrogen (H), carbon (C), nitrogen (N), oxygen (O), phosphorous (P) and sulfur (S). These elements represent more than 95 percent of the mass of a cell. Carbon is a major component of nearly all biological molecules.

Elements are characterized by their atomic structure. While the subatomic structure of the atom is a major topic of interest in chemistry, physics and biophysics, we will only discuss the basic structure that will provide sufficient information for the construction of molecules in the context of this course. Atoms have a central nucleus with positively charged protons and neutral neutrons; negatively charged electrons circle the nucleus. The electrons that are involved in chemical bonding are those electrons in the outermost orbit, referred to as valence electrons. On the periodic table below, you can view each of the atoms while hiding all but the outermost electrons.

Atomic mass, the sum of the number of protons and neutrons in the atomic structure, is a particularly useful measure of each element. By summing the atomic mass of all the atoms in a molecule, one can estimate the molecular mass of the molecule, which is then expressed in atomic mass units, or Daltons. This table shows the masses of the six atoms of the elements listed above, which can also be found in the upper right-hand corner of the box for each element in the periodic table.


Some atoms with important biological relevance are shown.

A molecule is a group of at least two atoms in a specified arrangement held together by covalent chemical bonds.

These polar bonds will interact with other polar bonds through an intermolecular attraction known as hydrogen bonding, such as that found between water molecules. Both the strong ionic and covalent chemical bonds and the weaker intermolecular forces are important in the functioning of the cell.

There are many important ions in physiology including sodium (Na+), calcium (Ca2+) and chloride (Cl-).

For example, as illustrated in the animation below, a sodium atom will transfer its one valence electron to a chlorine atom, resulting in the formation of a sodium cation, Na+, and a chloride anion, Cl-. Because these are oppositely charged particles, they are attracted to each other and form table salt which is stable in air.

When an ionic compound, like table salt, is put into water, it dissolves. This happens because the polar water molecule pulls these oppositely charged ions apart, as will be discussed further in the next module.

After single elemental atoms, we can think of small molecules as the next level in chemistry’s hierarchy. Molecules result from the covalent bonding of two or more elements’ atoms.

The number of bonds between two atoms, such as single bonds, double bonds or triple bonds, helps determine the stability of the atomic interactions. Double bonds, which share two pairs of valence electrons between two atoms, are very strong. The strong bond of carbon double bonded to oxygen is found in amino acids (these will be discussed later). The number of valence electrons shared also controls the "shape" of the atomic interactions. Carbon double bonded to oxygen forms a "flat" (planar) bond that does not rotate. This limits the shapes that the larger macromolecule, with repetitive double bonds, can form.

A covalent bond is formed between two hydrogen atoms. 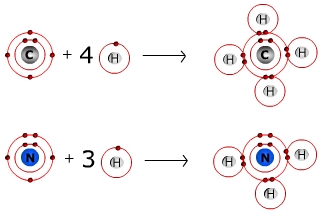 Formation of Methane and Ammonia Molecules